When I was in high school, I took my first tentative steps towards the world of running. Little did I know, I was in some of the very best hands.

I was a little uncertain when I tried out for cross country. I had waited until my final year to even consider it because of all my other obligations and well, my fear.
Our cross country team was coached by a shop teacher and assisted by a new English teacher. I went to a few practices and was hooked. The trails behind the school became a perfect stress reliever for me (or as much stress as a 18 year old girl can have..) I idolized my assistant coach and began to get over my irrational fear of racing because in spite of not practicing as much as everyone else because I lived quite far from the school, I was actually good at it. I loved the camaraderie of it all – the entire team piling into the van at an obscenely early morning hour, cheering each other on during the races and huddling in the team tent following the race, cold and shivering from the inevitable rain, sharing gatorade and bagels. I also loved the escape it provided, which is the reason I think it truly stuck. My final year of high school was an exceptional year for our family as my dad expanded the business into the new location and Jolene was rehospitalized. I just read a book by Christopher McDougall that explains that after almost every disaster in the US, there was an influx in running. It could just be a coincidence if it wouldn’t have kept happening. I believe it. I would not have been able to face my problems up front if I didn’t take a little bit of time that day to run away. 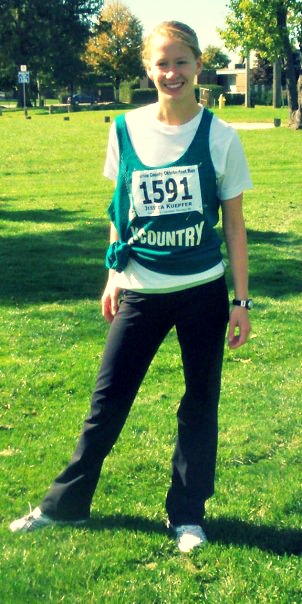 My little high school runner self

When the summer months hit and I had graduated high school, my coach tracked me down and told me that his daughter was willing to coach me over the summer if I wanted. Of course I said yes. I naively went week after week, knowing she was a “good runner” but having no idea of who she really was.

After the summer past, we went our separate ways and that was the last of it, or so I thought.

Last summer, on a beautiful clear day, I was driving along and was sidelined by an absolute running work of art. Jesse always complains that I judge people on their running gait, which may be true. We will pass a runner while we are driving and in mid-conversation I will blurt out “That’s an injury waiting to happen! Look at that heel strike!” But this was no injury waiting to happen. This human being was sailing along with an absolutely perfect gait and eating up the miles with ease. I stared slack jawed and dumbfounded.

As luck would have it, I ran into my old cross country coach that week and told him about this runner. Without missing a beat he said: O! That is Wesley! He is married to my daughter. Wanna meet him?”

Do I want to meet him? Really?

Wesley is one of the kindest, humble and genuinely talented human beings I have met. (Did I mention he won the Boston Marathon this year?) His wife and my coach for a summer, Tarah, are one of my role model couples. With this “couple crush” on my hands, you can imagine my delight when I was flicking through the latest issue of Runners World and happened upon this insert: 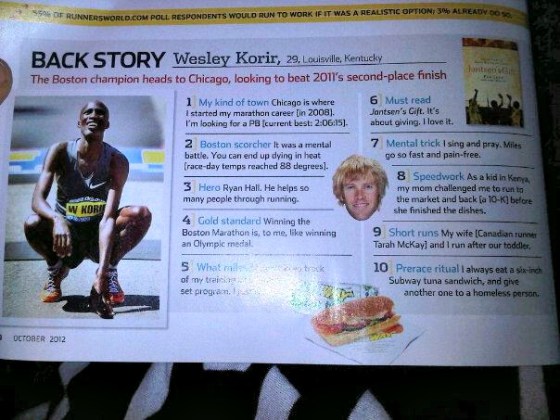 Tarah McKay and Wesley Korir are just two of my many running heros. Together, they started the Kenyan Kids Foundation and have been doing amazing things.

Who are your running heros?