What a wonderful holiday season I have just come through. It was lovely to have time off but I am ready to jump back into regular life and a regular blogging schedule. I have so many amazing things planned for 2013 with Laces and Lattes and I cannot wait to share them with you. But FIRST, I want to thank you all for being such supportive, fantastic readers in 2012. I feel beyond blessed to have people who read my writing at all and although I would do it if no one were reading, you all turn it into a conversation. So thanks.

What have I been up to the last week and a half? It is hard to remember when life switches gears and moves at a different pace than normal. I am used to compartmentalizing my days and when it is one giant relaxing free-for-all, my mind is a blank. Here is a bit of a sneak of what I have been doing: 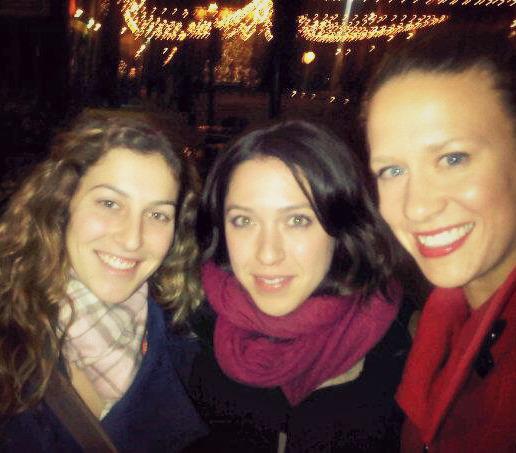 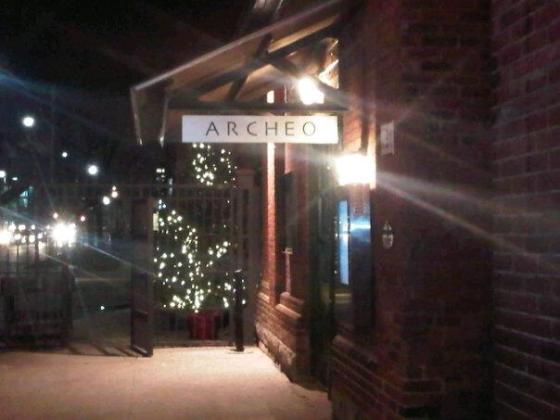 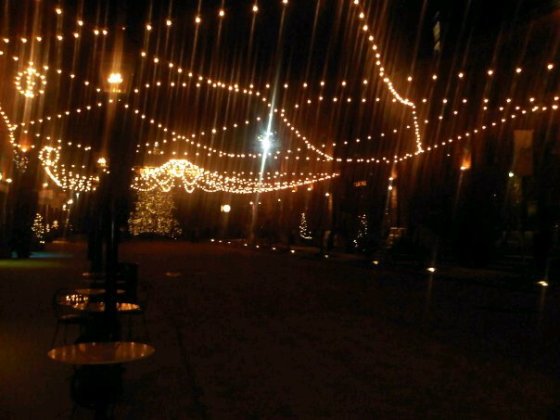 Babysitting with Jesse.
(Unlike they told their parents, we did not allow them to polish off an entire bag of PartyMix 😛 … Jesse treated it as dinner and gave them a hand. We put them to bed 2.5 hrs past their bedtime; obviously the most capable sitters EVER) 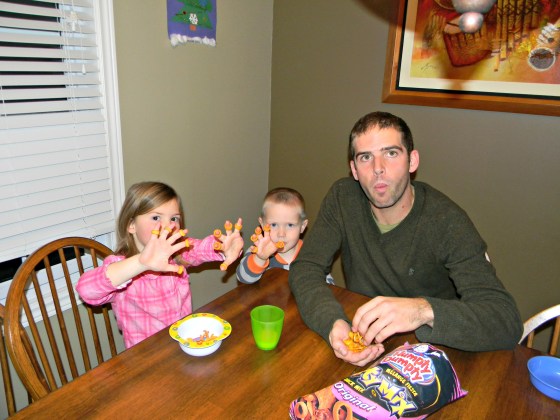 I snapped this candid photo on my phone of my grandma and sister puzzling out a crossword together. One of my favourites! 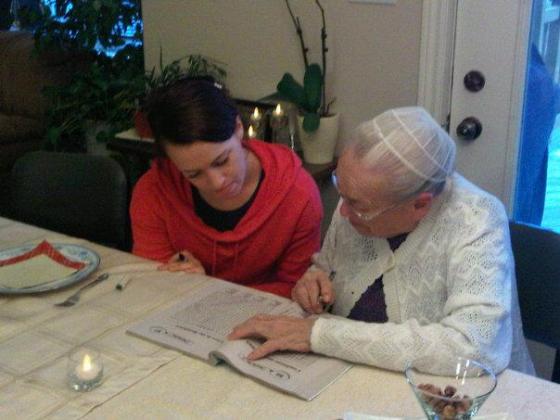 Christmas with the family

Yes. My mother bought us onesies. And yes, we wore them all morning. 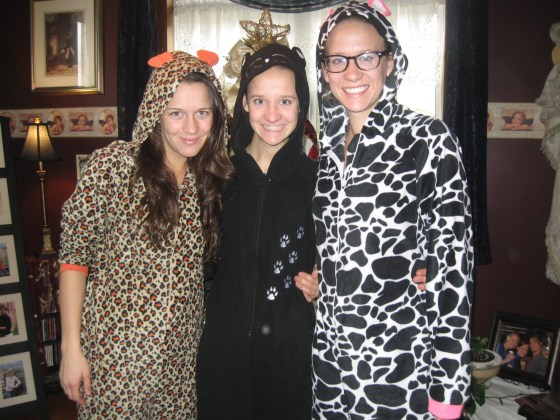 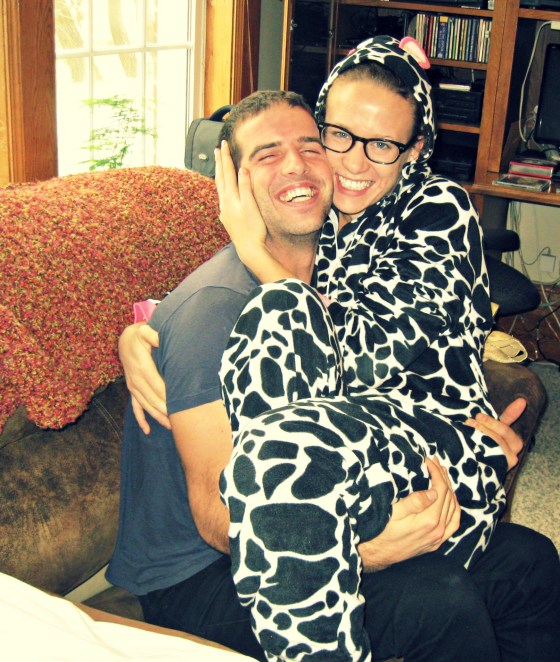 We weren’t the only ones who were dressed for the occasion: 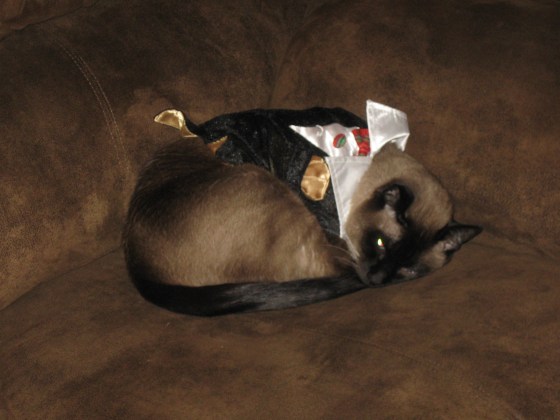 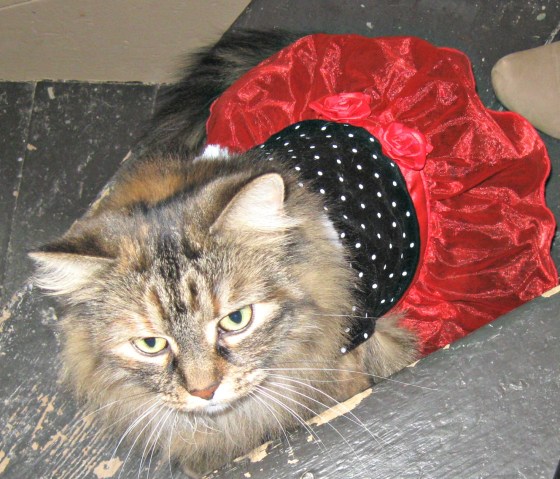 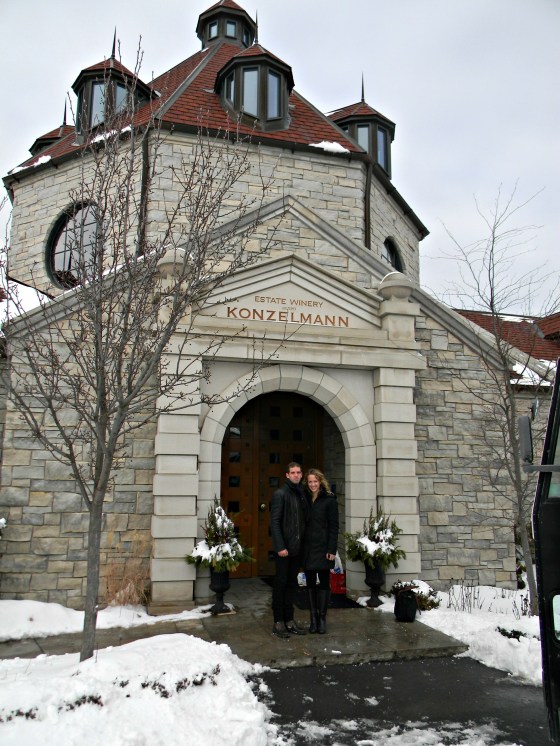 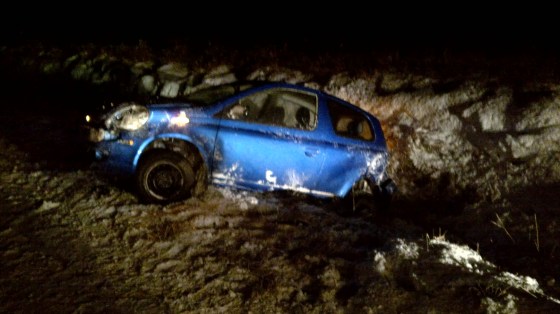 Yes. You read that correctly. Yesterday, I was heading home from Niagara to change and get ready to go out to the two New Years parties on our agenda. I was about 10 minutes away from home when I hit a snowy patch of ice and swung into an icy patch. I spun into the ditch facing forward and I remember nothing after that. It was a traumatic end in 2012, and 2013 has begun with insurance calls, car rentals and phone shopping. Yes. I feel a bit like Job, my phone was ruined in the accident as well.

I feel so blessed to have a family and partner that I can call at anytime for anything. Jesse dropped everything and came to let me sit in his truck while we waited for the police. My dad left work and my mother dropped her shopping. (Perhaps the most surprised of all at the latter). 😛

They waited on the side of the road for almost two hours until the police and tow truck came.

And then they waited almost another two while the forms were filled, reports were filed and the car was loaded on the truck. I reacted a bit when the tow truck driver started treating my car like the wreckage it is. I named her Serendipity Elizabeth Kuepfer and have treated her like a human being since I have had her. When windshield wiper fluid hits the dashboard, I joke that I am washing her face. When she gets new snow tires, I tell my father he is helping me put on her new shoes. This car is literally an extension of me because I spend at least 2 hours driving every day. Totally ridiculous, I know, but I totally LOVED that car. On the way home from Niagara, I was waxing poetic to Jesse about how I grew up in Sera. I got her before University and she carried me through my entire undergrad. She took me to youth group, to parties, to South Carolina, to Indiana, Virginia, Ohio and all around Ontario. I literally could write a chapter on how much I loved this car, but I realize how ridiculous I sound. Regardless, this week I am squaring my shoulders and buying a replacement for Sera, naming it, and beginning another round of adventures in another “best car in the world.”

My parents cancelled their New Years plans, Jesse called his best friend and let him like we were not going to our New Years party and we all had a candlelight steak dinner and brought 2013 quietly watching War Horse and toasting with ice wine at midnight. It was a beautiful New Years, completely unexpected and opposite of what any of us had planned, but that is why it was perfect.