A big thank you to all of you were so patient as I pressed a giant reset button and took a few weeks off of blogging to go on the Trek and get organized when I returned. This past Friday night, I spent that majority of the evening unpacking, organizing and going over the financial details of the trip. Can I just say that driving all the way to North Dakota and back cost me a mere $330 in my Prius? LOVE my car! 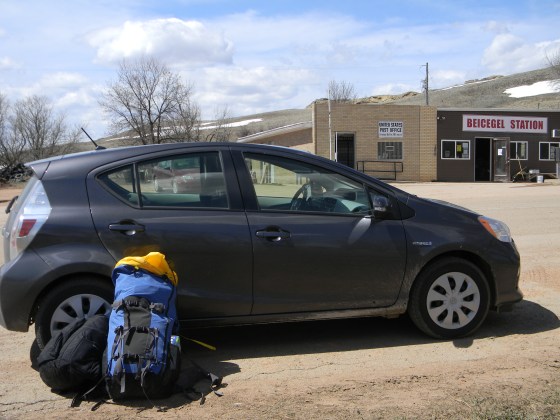 I have gotten a lot of people asking me about my trip. How it came about? How the experience was? How I am feeling? I have a lot of caring people in my life and I figured this is the best way to bring everyone up to speed.

How it came to happen:
A couple Wednesdays ago, I was sitting in my regular spot in Starbucks, sipping a latte and trying to hammer out my column for AJ: The Green Athlete. The latest one can be seen here.

I was short on time and I was scrambling to find an organization that connected athletes and environmentalism. I forget exactly how it happened, but I landed on Adventure Science out of the blue and read their information on 100 Miles of Wild Trek in North Dakota this spring. I began furiously typing up my piece, getting more and more excited about the organization.

I thought it was an American company, but I felt a compulsion to email the founder, Simon Donato, and said I wanted to get involved somehow. I was thinking helping with the website, content, copy or promotion, but within 10 minutes, he had emailed me back and said that one of his athletes was hit by a car and potentially could not participate in the trek and would I be interested?

The days before leaving were a blur of requesting time off from bosses, cancelling appointments and a surgery, borrowing gear from friends, getting travel insurance, buying gear from Adventure Guide and figuring out how to tell my mother who had left the country for a short trip and had no idea that I would up and leave for a 100 mile trek while she was gone. (She has known me for over 23 years, I cannot understand why she would be surprised anymore).

My favourite conversation was with my AJ boss before I left. I called him to ask permission to go:

“So, it is going to the badlands of North Dakota and running 100 miles and it would be my vacation time and I will get everything done that I need to when I get back and (Insert other run-on, desperate pleading sentences here)”

He was silent for a moment. “Jessica. I knew you were an unusual human being when I hired you, but I can never get used to the requests you keep throwing my way. But GO!”

So I went. I had a brief conversation with my father as I headed to the border so he could tell my mom and break it gently. He gleefully crowed “THIS is the reason I held you over the banister by your ankles and swung you around when you were young – so you wouldn’t be afraid of anything!” (Do not jump to thoughts of child abuse. We loved it and always asked for more.)

Anyways. So the drive was a LOT longer than I thought. I taught a spin class before heading out and was on the road by 8 am on the last Friday of April. I had loaded up my iPod with new music and an audioversion of Wild by Cheryl Strayed, but the roads blurred into each other and I was almost hallucinating when I reach Minnesota for the evening to stay with one of the trek leader’s houses. 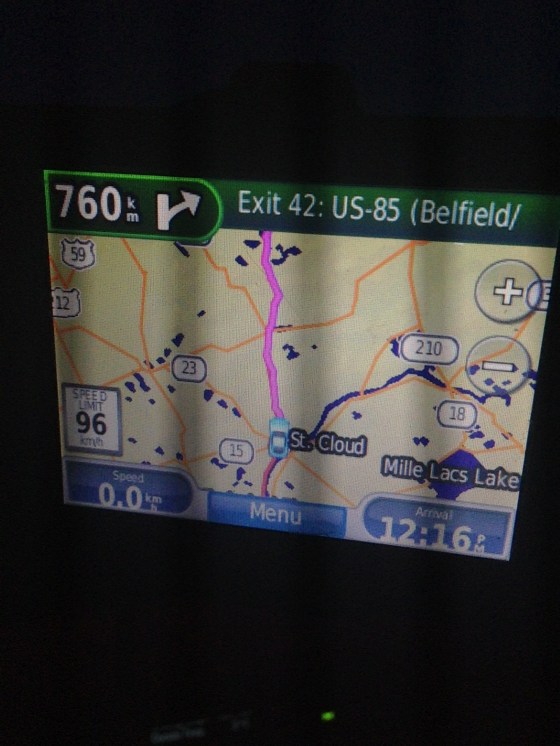 Soon, I was in the barren world of cactuses, oil trucks and country music. I heard advertisements for liquor stores that were leveraging cattle branding parties as a reason to come in and buy booze.

I arrived on the Saturday to the tiny town of Grassy Butte where I abandoned my car, picked up my huge back pack and headed to the base camp with the leader of the trek, Richard.

From there, I met the team and was briefed on what we were to expect for the week. We were to head out into the badlands and would cover territory that people have never walked on and probably will never walk on again. We were to stop every 2-3 hours for “science” as they called it. We entered an analysis of the surrounding vegetation and wildlife into a book and took film and video footage to back it up. 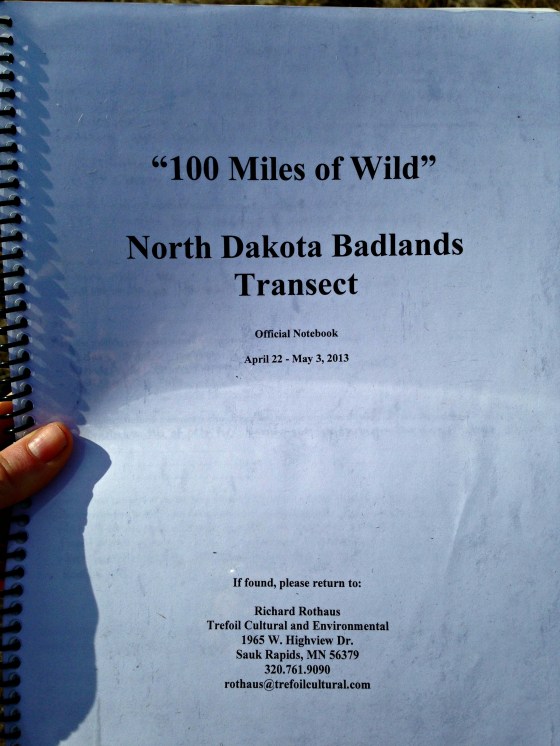 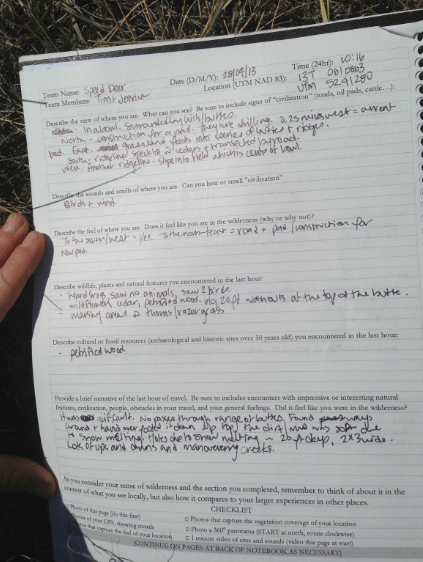 Why? Because they are planning on putting in 30 – 50,000 new oil wells in the badlands over the next 5 years. Our team’s goal was to go into the badlands as a completely neutral group of scientists and ultra runners, go to the wildest and most remote bits of the badlands and report back. The research will be taken to the University of North Dakota and the information will be presented to the citizens to help them make informed decisions when it comes down to the decisions surrounding the oil pads. Also, many years ago, it was the Badlands that inspired Theodore Roosevelt to develop the National Parks System and it was our job to see if the Badlands were as life changing now as they were back then.

I can tell you they are. I spent 7 days immersed in them, outside every day. Some days it was so cold that we woke up with frost on our tent and other days I came back with a sunburnt nose. We saw every form of wild life and woke up to sights like this: 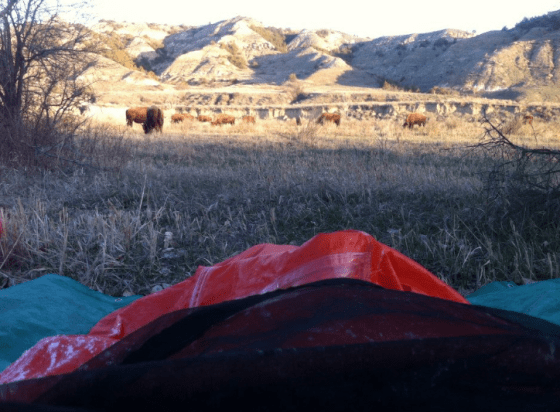 I had experienced a lot of sad and discouraging things in 2013 – a break up, financial set backs, surgery, fear for Jolene. And even though the Badlands didn’t take any of that away, it was a reset button. I met some of the most incredible people who either love science or ultra running and in many cases both.  I was able to learn so much from the people around me. I learned how to orienteer from a US Army Ranger and discovered native flints in the creek bed with a geologist. The badlands broke me open and then filled me again. 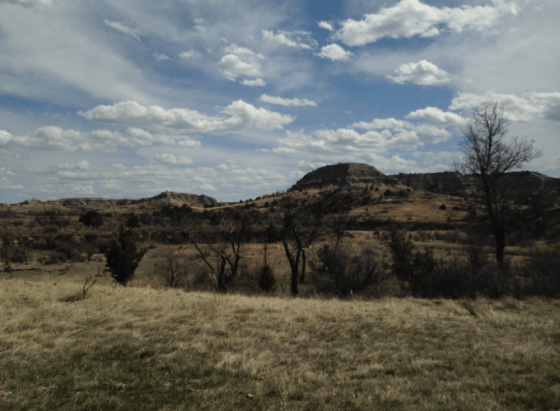 Getting away from the sappiness, an average day out there would begin with this.

We would put on our running clothes for the day (or in my case, almost every piece of clothing I brought to stay warm) and head to the eating area for Stoked Oats. (Buy them).

By around 7 am, we were ready to hit the Badlands with our maps, detectors and garmins. I was either on team Speed Deer or Mountain Kitty and we covered 20-30 miles with 3000-4500 ft of altitude each day. We would hike, climb and run through rolling buttes, grass lands, cattle feeding pastures and creek beds reporting on the wild life, landscape and oil pads, arriving at the last point at around 5-6:30 pm each night. 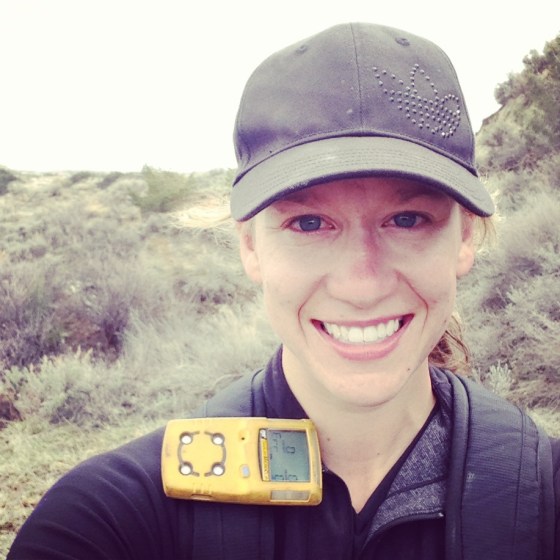 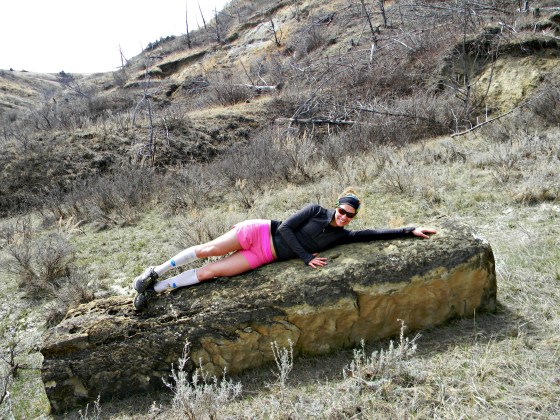 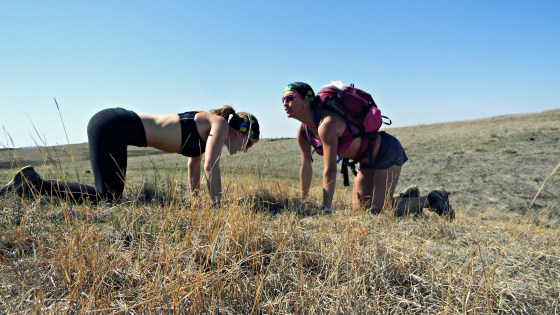 Taken on the last day. They told us to take fun pictures but after running through miles and miles of cattle grazing, this was as creative as we could get. 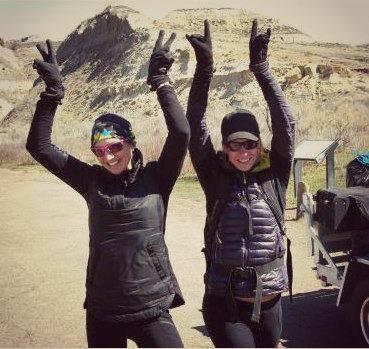 We were picked up and taken to base camp, which moved about 3 times throughout the course of the Trek. From there, we would “shower” (baby wipes), change into every article of clothing we had and gather around the fire to eat dinner and discuss our day, which was recorded or filmed to provide additional data.

By 10 – 11 pm each night, we would fall exhausted into our tents and the day would start all over again.

Our Team was the following: 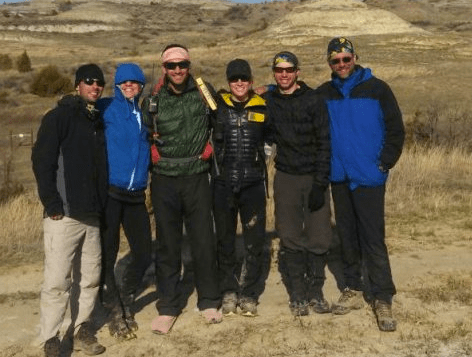 [Photos from the 100 Miles of Wild Blog] 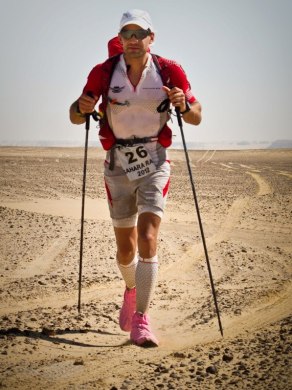 Richard Rothus: Archaeologist, Historian, and Owner of Trefoil Cultural and Environmental and was in charge of Basecamp and Logistics. 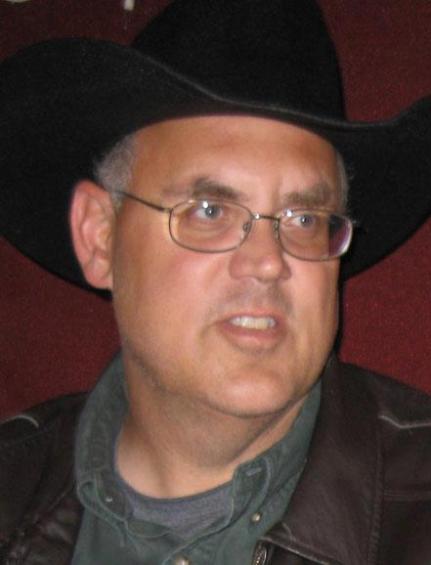 Andrew Reinhard: Director of Publications for the American School of Classical Studies at Athens (ASCSA), Archaeologist. He headed up the control group which walked the trails of the Badlands. 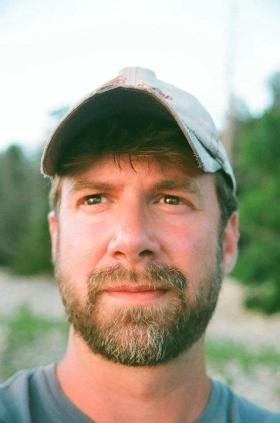 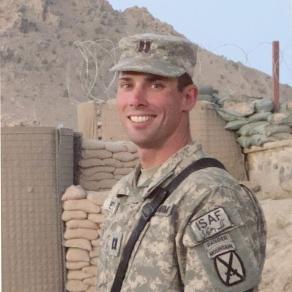 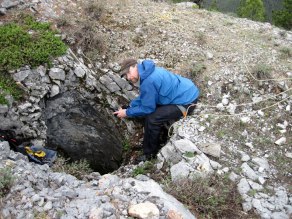 Tyler Leblanc: Our paramedic and member of the control team. 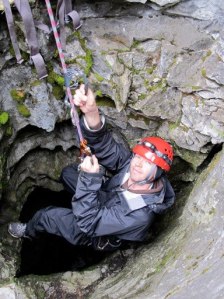 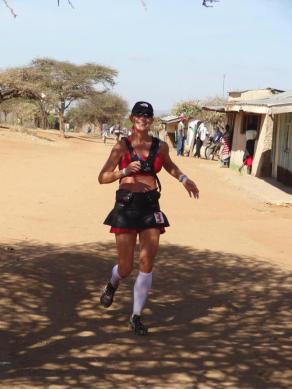 Needless to say, it was a wonderful experience to get to know all of these amazing and accomplished people over the course of a week. Another cool thing about the trek is that we carried the Explorer Club Flag. 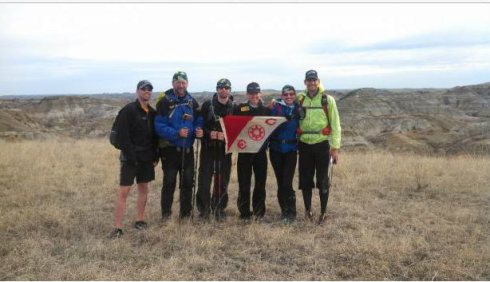 The Explorers Club is an international multidisciplinary professional society dedicated to the advancement of field research, of which Theodore Roosevelt was an honorary member. The flag represents the impressive history of courage and accomplishment, and has been carried by members to the Moon, the depths of the ocean, and around the globe. I am excited to be able to join the club having been on an approved expedition with the flag.

I will be going on more adventures with this team as I am now an ultrarunner for Adventure Science. I was given a huge boost of confidence by some of the ultra runners who told me they didn’t slow down for me. It instilled a desire in me to train harder, race more  frequently and in more international races and the belief that I am good enough to do it. 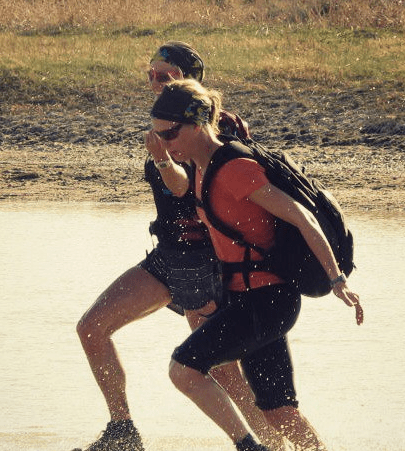 It was sad to say goodbye to everyone on the team, but last Saturday, I dropped Jane off at the airport and began the long trek home. I stayed in Chicago for the night, ate deep dish pizza for the first time in my life (overrated) and slept for a solid 12 hours.

I arrived home on Sunday night and hit the ground running Monday morning.

Needless to say, with 48 hours of driving, I had a lot of time to think, some of which relates to the blog. Keep your eyes peeled for some new changes. Laces and Lattes will be around for a long time, but it will continue to change because I keep changing. Thank you all for being along for the run! 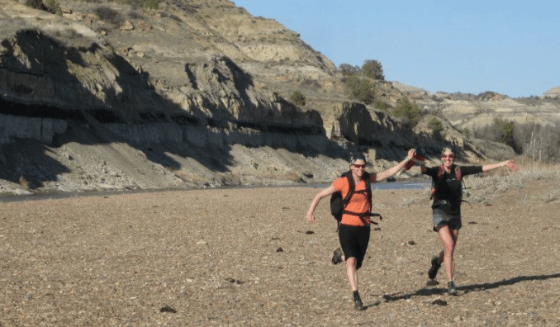 For more reading on the trek, check out:

Article in the Dickonson Press

Article in the Bismarck Tribune