Welcome to the weekend! It has been a huge week of change for me as I started a new position at my work place and it has been non-stop madness. On top of that, it has been a high volume/high intensity training week so I am ready to glide into this glorious long weekend! Per usual, I have a host of “social training” with lots of trail runs, long runs, bike rides all followed by patio inhabitation. I am also headed to Hamilton to visit two of my best friends in the entire world. Basically, perfection of a long weekend.

Last weekend, I raced with my Health and Performance team and my running bestie, Angela. It was the Baden 7 Miler from the Run Waterloo Series  and boy, it was a hard race!

It was an out and back course with the middle portion being a hill climb of the highest point in South Western Ontario. As a hill junkie, I was pretty excited about this, especially knowing that the fastest female runner on the hill would get a new pair of shoes. My training Asics are almost worn out as they have a duathlon, a marathon and a load of spring training on them so it is time for a new pair!

The race hub was at Wilmot Rec Complex. I arrived in decent time, stretched and went on a warm up run and toed up to the windy start line at 9:30.

The first portion of the race was fairly easy. There were a few uphills and we were racing with the 5 KM racers but it thinned out at the 2.5 km mark and I passed a female runner to come into second. I was racing against Erin Fox and I knew I wouldn’t be able to beat her, so I just focused on my goal for 2014 of podiuming and settled into a regular pace. 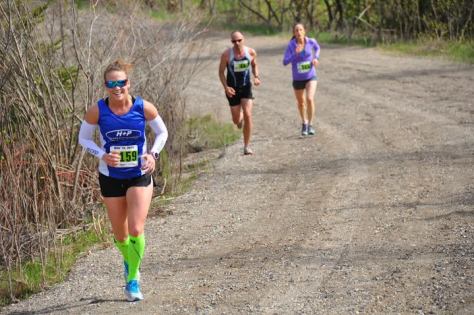 I tried to maintain a 4:10 and slowed slightly coming up to the hill climbs. There is an incline leading up to the gravel hill so I took it back to a 4:30.

At the hill, I focused on proper form and quick foot turn over and rang the bell at the top of the hill (one of the coolest features of the race) and sprinted back down, gasping for air. 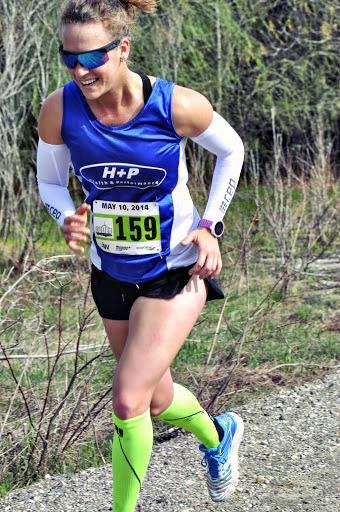 The way back was downhill, but it proved more difficult to me than the uphill beginning. I was able to maintain a fairly consistent pace but the wind was whipping back towards me which was difficult both physically and mentally. I climbed the final hill with two KM to go and realized I didn’t have much left for the finish. 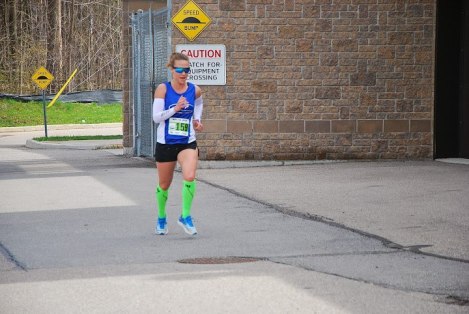 I did the best I could, but with the combination of the big climbs and strong wind, I wasn’t able to negative split like I was hoping. I managed a decent sprint finish for a time of 49:07, second female overall, first female in the hill climb and first in my age group.

It was a super fun race and the RunWaterloo served up the amazing goodies it always does including delicious food (hello watermelon!), post race massages and giveaways including $250 and a RunWaterloo quilt.

My next RunWaterloo race is the Waterloo 10 KM Classic and I race Sulphur Springs 25 KM trail race next Saturday.