It’s going to be another super busy weekend planned. Two races including my first triathlon, one run event in Toronto and a concert all rolled into two days. You always know it was a perfect weekend when you are exhausted on Monday morning… I apologize in advance – my instagram will be buzzing!

Speaking of races, I thought I would do a quick recap of the Waterloo Classic that I ran last weekend. This was a different race for me. I was racing with my team, Health + Performance but I was slowly coming back from that knee injury so I wanted to be cautious. And quite frankly, I race a lot so I mentally was due for a race where I was just having FUN.

It was held on Sunday, June 15 and it was a beautiful morning. I was a bit late to the race and as a result, I slipped up to the start line about 2 minutes before gun time. Let’s just say my heart rate was about 100 bpm just standing there… 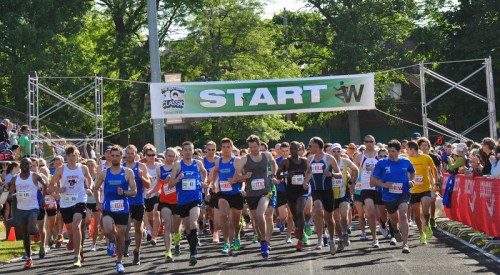 I started too fast, but this was not a race that deeply mattered. I focused on breathing, on form and on feeling happy that I was racing. I tried to conserve energy but keep it in about fourth gear. I am racing every weekend right now so it is not realistic to go full out every single race.

The first 5 KM went well and I did the first half in the low end of 20 minutes. I knew that I would run a comparable race to the Yonge Street 10 KM which is great as that is a speedy course that is mostly downhill. The next 2 KM were a bit laborious but then I hit the turn around point, no longer had the wind in my face and was feeling AWESOME. I started pushing harder. 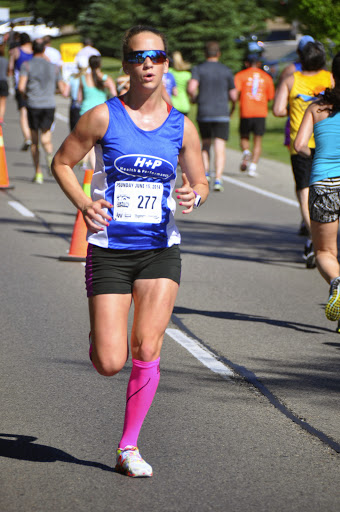 I finished with a time of 42:14, 4th female overall and third in my age group. I was 12 seconds slower than Yonge Street 10KM but I was happy with my race. I have been racing hard lately and it was great to get out there, feel good and have a wonderful time with my friends and team.

What I ate: Dinner was pizza from the best little pizza shop in Hamilton with my best friends in the park. 5 pieces later…
Breakfast was banana, coffee and sprouted toast with nutella. I’m on a nutella kick right now and I am not stopping anytime soon..

The Waterloo Classic is such a great race. I highly recommend it to anyone who is looking for a fun 10 KM. It is well staffed aid stations, fun course and probably their biggest race yet! It is fun to race against some fast people and meet some blog readers as well. The food, as usual at RunWaterloo races is second to NONE. 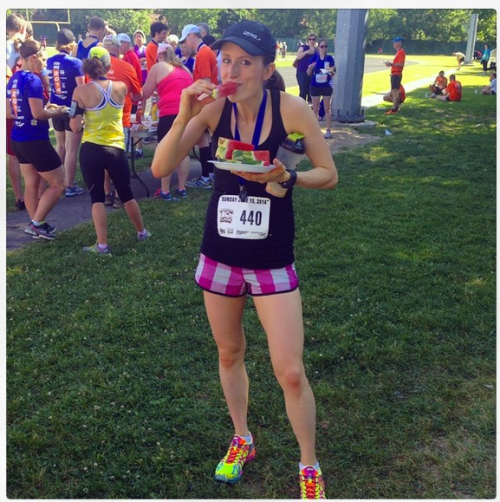 Ange taking back some watermelon after her stupendous race!

You can check out how the rest of my team performed here. The next RunWaterloo race that I am running is the Endurrun. I am on the H+P girls team and I am tackling the marathon leg which means I have 8 weeks to get into marathon race shape. 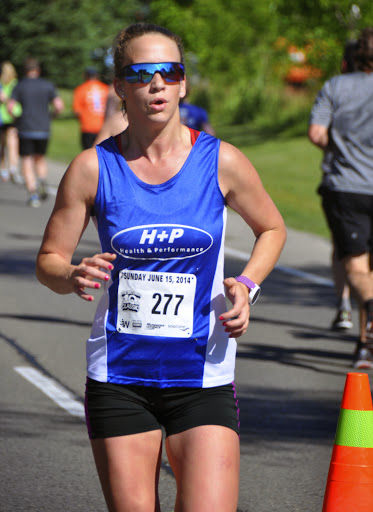 This weekend, I am racing the 5 Peaks Heartlake Trail race and the Guelph Lake Triathlon. If you are interested in racing 5 Peaks with me, it’s not too late to sign up. I am so excited for how many of my awesome runner friends and readers are coming out for the event and would be SO EXCITED for you to join. Email lacesandlattes@gmail.com and I’ll hook you up with a discount code.