I visited my naturopath the other week to talk nutrition and training. I have never talked about this on the blog before, but I am an endurance athlete with Graves Disease which is an aggressive form of hyperthyroidism. Basically, while everyone else’s thyroid decides to slow down, mine wants to ramp into high gear which causes me to lose weight and muscle mass. I am going to do a full post on what exactly it is and how I manage it this August, but it is the reason I work closely with a naturopath and an endocrinologist to make sure I don’t have a thyroid storm in the middle of a marathon. More on that later, for now, my naturopath absolutely floored me when she mentioned that I was doing well with my nutrition. My long time readers know that I have a sister with severe anorexia, so as a result, I am VERY relaxed with my nutrition and probably eat more sugar and fat than the average female runner because my over all goal is balance and positivity towards food of all kinds and well, that whole thyroid thing.

One change that I have made in my nutrition while training is to remove an afternoon coffee which cuts me down to one a day. Hyperthyroidism puts everything into overdrive for me, so inflammation from training will be enhanced. One thing I have added in is beet juice for my long runs and I wanted to talk a bit about that. 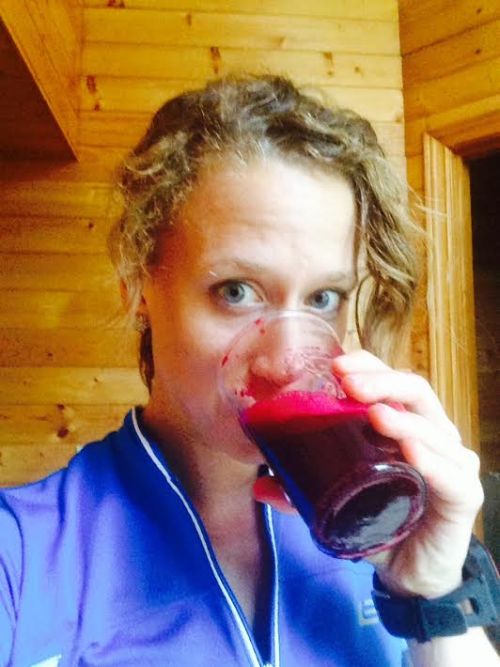 There was a study done by Andy Jones at the University of Exedor which showed that by adding beet juice to training increases the plasma nitrate concentration in the blood, reduces blood pressure, and made exercise feel easier.

Beets are a fabulous source of inorganic nitrate – just make sure you don’t use too much mouthwash before consuming them! The nitrate ends up in your saliva, where bacteria convert it to nitrite. Elsewhere in the body, it is converted to nitric oxide which aids in blood flow, muscle movement and brain transmission.

Here is a graph showing how levels of nitrate in your blood change after increasing amounts of beet juice: 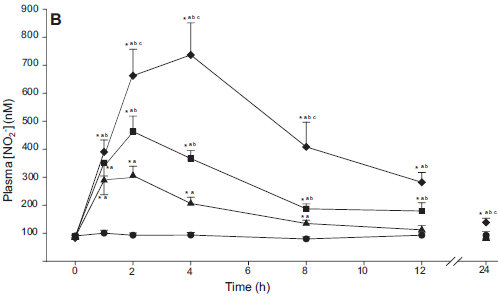 So the more beet juice you drink, the better the effect. It peaks at about 2-4 hours and tapers off at around 12 hours. As a result of these increases in beet juice, blood pressure dropped and the amount of energy needed to maintain a moderate level of exercise decreased after drinking the beets. Basically, it felt easier to run at the same pace than without the beet juice.

I tried it out myself this past weekend and although I had tired legs after a hard week of marathon training, I was flying for the last 10 KM of my 30 KM run. I am planning on continuing to play with it until my marathon in 3 weeks, but my only caution is to not drink more than 500 mL as beet juice has been proven to be synonymous with portapotty stops. 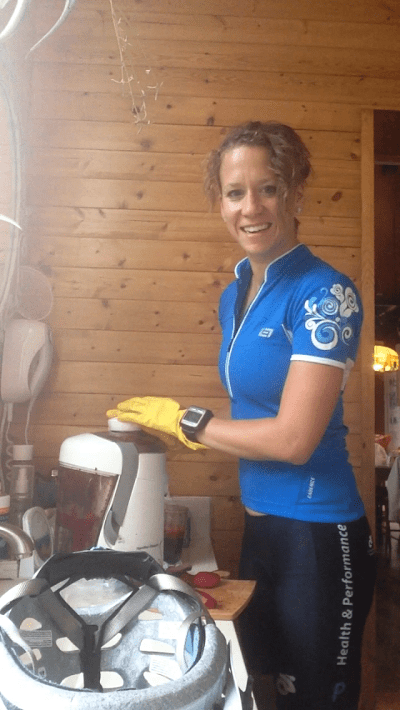 To make beet juice, take 2 large beets and put them in a blender or juicer. Add water or fruit as desired.

If you find it difficult to palate, mix in an apple or pear with water to dilute the mixture and add some sweetness. I will be honest, straight beet juice (which is how I took it down) tasted not unlike alcohol.

How about you? Ever tried beet juice for endurance events? What was the result?

If not, would you try it?