Well this one is sure overdue!

The Week of Three Races is a distant memory, I just finished my tempo workout for the evening and am eating dark chocolate in bed. There is probably not a better time to do a race recap than now.

Five days after running the Boston Marathon, I ran a race.

The day after that, I got up and did another race.

I am going to preface this whole post with saying that I did not go full out on either one of them but followed very calculated paces for both and used them as a recovery. The days following Boston, I did not run at all until the Saturday. That morning, I headed to Terra Cotta 5 Peaks and did an easy warm up with  Michelle  before lining up for the race. This was just an easy run and I knew that my coach would be analysing my Strava account and I would be in trouble if I broke a predetermined pace so I stuck to that.

It was a beautiful, albeit muddy jaunt in the forest with some great people! Michelle did the Sport course and paced me to the finish on the second half of the Enduro course which consisted of planning our next podcast and taking selfies. Taking things seriously as usual. Join us at the end of May for Heartlake. Use code JESSICA for $5 discount.

Following the race, we headed to the Paris to Ancaster expo to scout out the course and get our race kits for Sunday. I also managed to leave my wallet at a random Starbucks on the way which takes my commitment to spending all my money on lattes to a new level.

The next morning, wallet procured (did you know there are like 150 Starbucks in Mississauga? Me neither….) I headed to the Paris Community Centre to start my first mountain bike race…ever. Ok. Can I just take you aside for one second? I am NOT a strong mountain biker. I had never ever ridden my mountain bike with clips, in yet, in typical fashion, I felt like a race would be the best time to try that out. It was just a training ride for me and a low pressure situation because I had no expectations for myself other than finishing. I mentioned to Michelle that I was planning on taking it super easy for the race and she said she was planning on doing the same. I don’t think she understood that I was literally treating it as an event and not a race in any way until I asked her if there was technical portions.

“You actually have NO idea what you are getting into, do you?” she said.

The race began and she was off like a shot as she was on a cyclocross bike and I was riding my new mountain bike. I settled in and enjoyed the ride. I am fairly strong on the climbs but was conservative about passing people at the start. I was a complete beginner for this ride and I wanted to just take it all in.

As the race progressed, I became more aggressive and confident and started picking up speed. Everything was well marked and the people were cheering like crazy! There were a few bottle neck moments because of the mud, but it made the whole experience so much fun, wading through mud with your bike on your back until you reached solid ground again and then riding like a mad woman to the next mud pit.

The race was beautiful and there was a lot of support along the way. I kept a fairly conservative pace and felt great the whole way. The final climb, I chose to walk, as I knew I ran a marathon less than a week before.

I crossed the finish line and found Michelle. 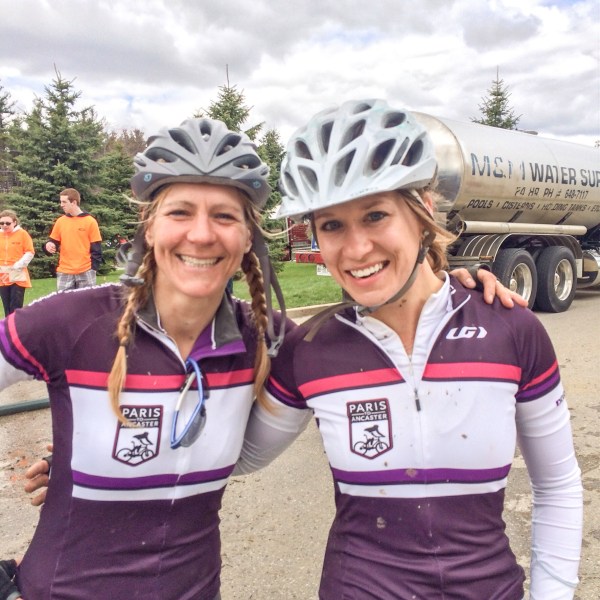 She had a such a solid race! We went inside to celebrate and were half way into our pulled pork sandwiches when they announced that we podiumed?

I have never been more shocked in my life. 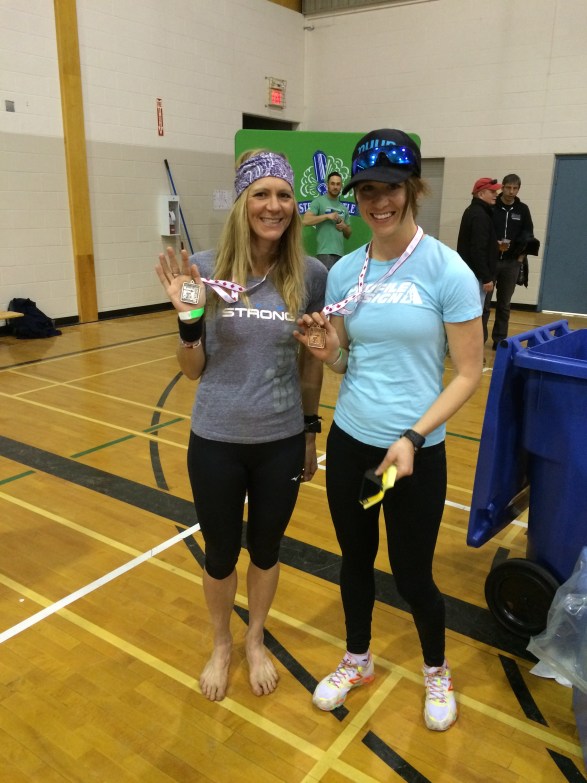 It was awesome to podium my first bike race and it gave me confidence for my upcoming bike races this summer. Paris to Ancaster, which is full of strong and incredible athletes, was also amazing for a new, female rider. It was not as aggressive or intense as I was expecting, everyone was open and welcoming and I will absolutely be doing it again next year.

What has been your biggest surprise at a race?