This has been a year of stepping WAY out of my comfort zone and I love it. It certainly has not been a smooth ride in 2015 but it has been one to remember. I just added another weekend of memories and I feel so fortunate to be able to unplug and just PLAY on the weekends. I divided this into two posts – I am doing a race recap today and will share what I learned on what makes a good pacer on Friday. On to the recap!

Last Friday, I headed to Pennsylvania for the second time in three weeks to pace my friend, Kim Owens at the Laurel Highlands Ultra. 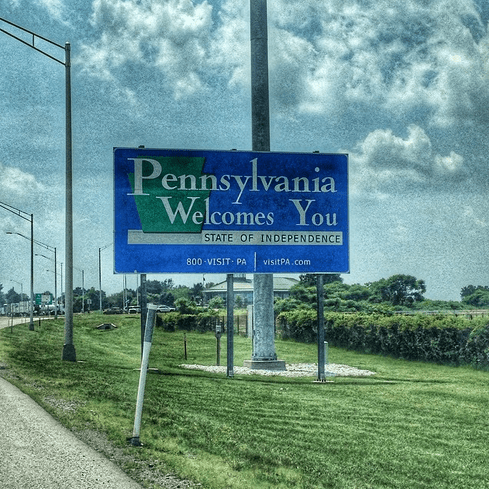 She is a race director for Switchback Endurance races and I highly recommend you run one. I try to get out to at least one a year and they are amazing!

This was Kim’s first race over 54 miles and she knew that she needed a crew who would be able to support her and keep her going when the race started taking its toll.
Enter Nikki and I! 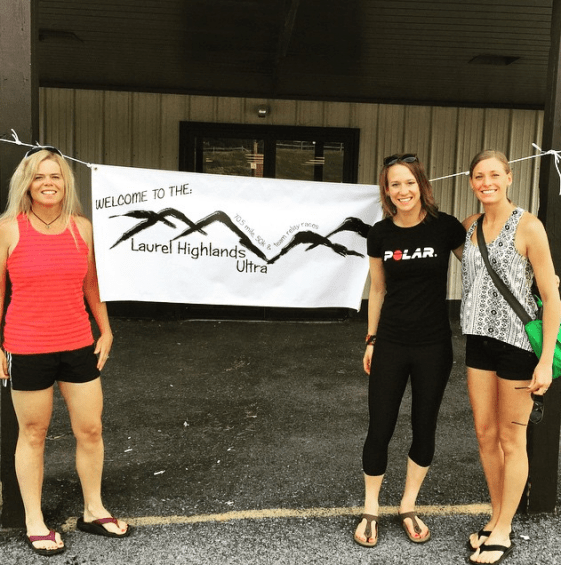 After a day of driving, I met them at the pre-race dinner where we were given race maps and aid station coordinates for the next day. We had a delicious pasta dinner and headed back to our hotel in Ohiopyle to ready our race bins for the next day. I may or may not have had a local craft beer while going over the maps with the ladies – I couldn’t help myself – it was a chocolate peanut butter porter called Sweet Baby Jesus brewed in Maryland. It tasted like a Starbucks drink to be honest. 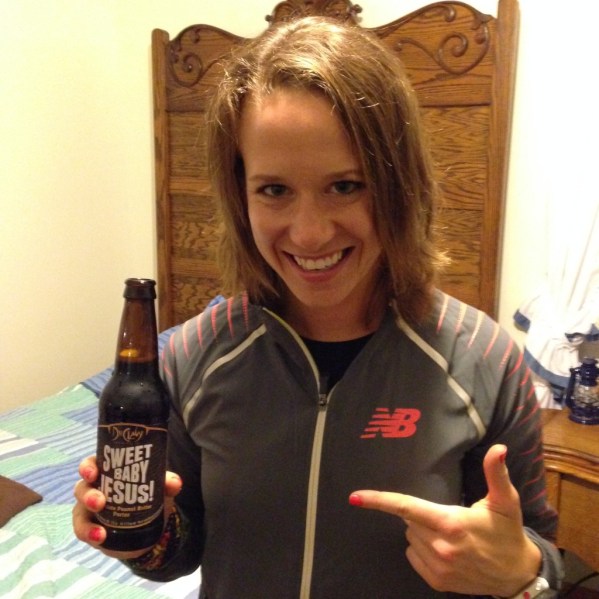 We headed to the local café to order some sweet potato fries for Kim’s race bags the next day and ended up chatting with the locals who claimed they owned the town. It wasn’t hard to believe. Ohiopyle is one of the smallest towns ever with a population of 60 people that gets flooded by millions of people seeking their white water rafting and hill training. They have the highest level commercial white water rafting in North American which makes it the cream of the crop. It is the reason I ALWAYS do it when I visit the area. 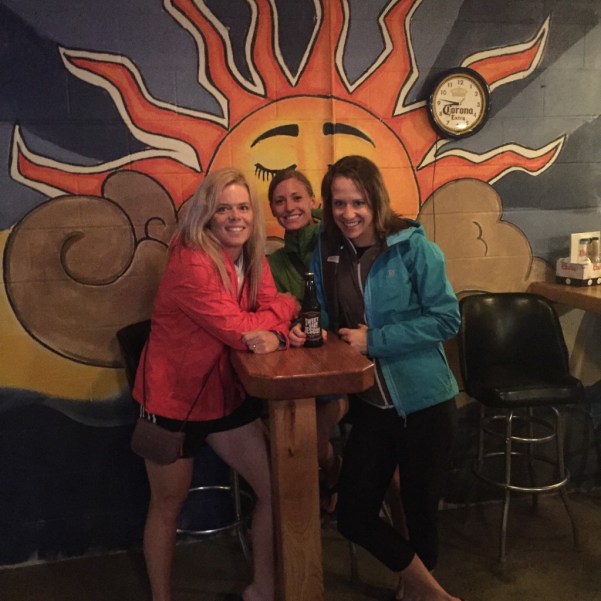 After drawing names for who would end up running the first leg of the 10 that we were doing over the course of the day (Nikki was chosen), we headed to bed to get some sleep for our 4:30 AM start. 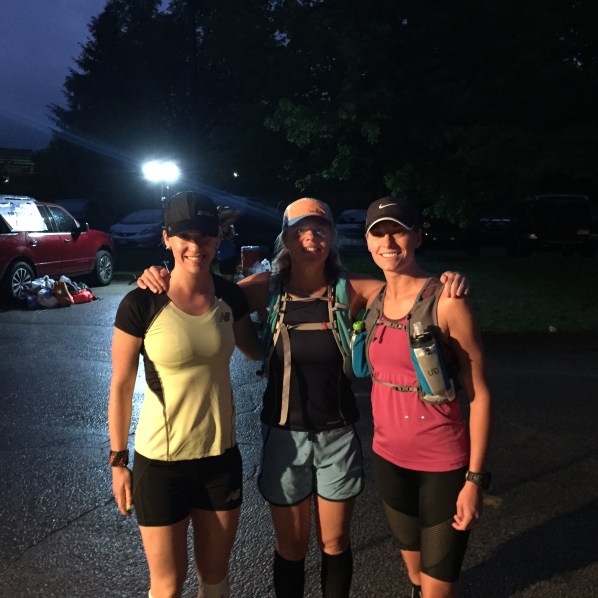 Nikki and Kim began at 5:30 and I grabbed a coffee and a pastry and went to the crew meeting. After that, I hopped in the SUV and followed the convoy of spectators to the first aid station. Once I was there, I got organized and headed down to the 11.6 mile aid station with my cowbell to cheer on the first ultrarunners coming through.

When Kim rolled in, I grabbed my pack and headed out on the second leg with her. This was our most chatty stretch of trail. I filled her in on everything that has happened in the month since I have seen her and we had a conversation on the science of happiness. We were smily and energetic when we arrived at the first check point 19.3 miles in. Nikki and I switched and I filled my face at the aid station table. 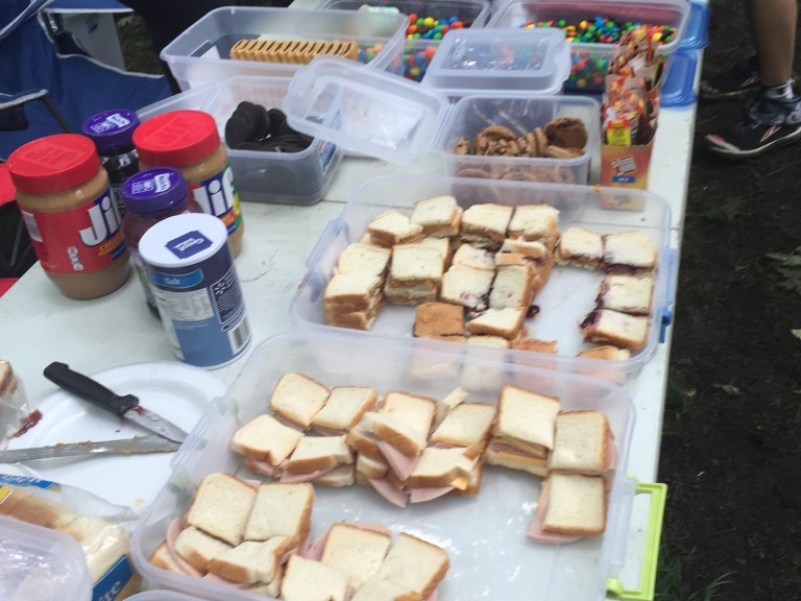 At this point, it was getting more and more humid so there were runners that came through that did not make the first cut off. I gave a gentleman a ride to the next aid station who had recently had a heart attack and was attempting the 70.5 miler. I honestly can say I have never met people more committed to their sport than ultrarunners. With the logistics of the drop off and realizing the aid station was not the same place as the crew station, I realized I had a 3 mile run to the location and took off running as fast as I could. I met Kim and Nikki on the trail about 2 miles and we ran to the cheer station where I had dropped off her bin. She grabbed some food and we set off for the next leg. At this point, we were well on pace for Western States and I was filling her in on the other runners who were coming through. She was very warm and wished she had her trekking poles. I found some sticks on the ground for her to use and we pushed through to the next aid station 28 miles in. 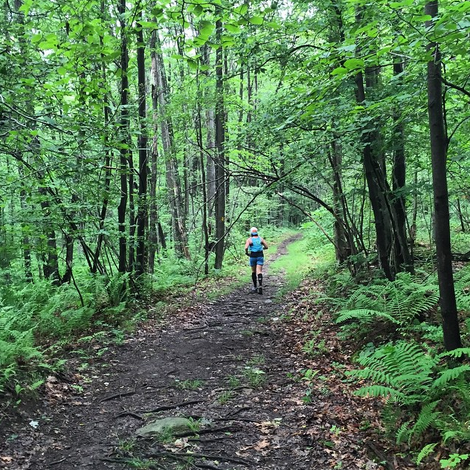 We switched and made sure that Kim had her trekking poles and I hopped in the SUV and headed to the next check point. I parked and carried the cooler in to the aid station 32.3 miles in where runners were starting to fold under the heat. I watched two gentleman come in who were very ill and DNFed immediately. Another runner had not eaten enough at the beginning and was doing his best to remedy his upset stomach and get more calories in so he could continue. There were quite a few runners who needed to drop earlier in the race due to the heat who were waiting to cheer their fellow runners on. I shared my gels with some runners who were missing their drop bags and desperately searching for something their stomachs could handle. They say that an ultra is an eating and drinking competition with some running thrown in and I believe it. 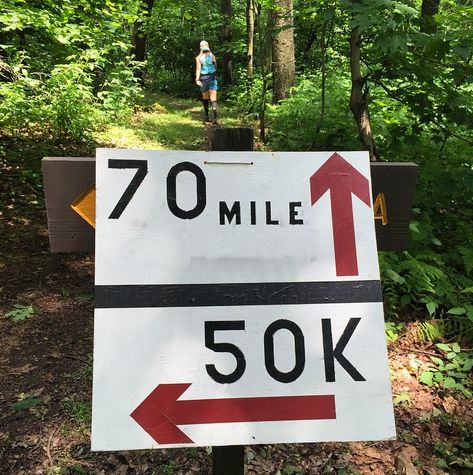 Nikki and I were carrying phones and when she messaged me that Kim was a mile out, I bounced down the trail and began yelling “Well THERE are the sexiest women on the trail…” when I stopped. I saw Kim was a bit emotional. The heat and hills had taken a toll and was slowing her down more than she expected which was putting her Western States qualification in jeopardy. We ran together back to the aid station and set Kim up with some coke (the pop, not the drug, which is an incredible thing to have when you are starting to die and need an instant boost. I don’t know why, but coke ALWAYS works). Kim and I headed out and I spent the next leg managing her expectations for qualifying. The Laurel Highlands trail is an INCREDIBLY difficult course, in fact, it is easier to qualify at most 100 milers than at this race. Not to mention, over 45 % of the racing field had dropped at this point so it was incredible that she was even still racing. We made it the 7 miles to the next aid station and Nikki took her place, just as thunderstorms began.

I drove to the 57.3 mile checkpoint and waited for them to arrive. I parked the car and knew that the stretch of 10.5 miles would be long enough for me to get about an hour of sleep. I knew that I would need it as the cut off for the race was 3:30 AM and I wanted to stay fresh for Kim. I had a quick car nap and went to the aid station where I was eating a grilled cheese sandwich and swapping stories with other crew members when the race director asked me where my runner was. The aid station closed at 11 PM and it was 10:30. I picked up my pack and ran on the dark trail in search of Nikki and Kim. I found them about 1 KM down running as hard as they could. They were caught by the course sweeper and knew they needed to hustle to stay in the race.

Kim and I headed out for the final stretch of the race in darkness. Kim was exhausted from 4 miles of hard running to make the fourth check point on time and rattled from seeing a bear on the trail. To keep her moving and her exhausted mind occupied on anything other than her physical pain, we did a run one minute, walk a minute. This was easier than it sounds as the ground was slippery from the rain and it was pitch black other than our headlights. She was a trooper but about 6 miles in, the course sweepers caught up to us and started hinting that we might not make the race cut off.

At this point, Kim was struggling. She had ran over 65 miles and was feeling the effects. I kept feeding her gels and chomps every 30 minutes and doing run/walk when we could. I stayed absolutely silent other than instructing her when to move and giving her a hand up steeper hills. I was deeply terrified we wouldn’t make it and I would feel as if it were completely my fault because I was in charge of her final leg. I was coaxing her and pushing her as far as I dared. She had started quietly crying because of her pain and I told her to go to her happy place. She was an absolute champion for persevering through pain I can’t even imagine and when we hit the 69 mile mark, I surprised myself by starting to cry as well in absolute relief. I am not an overly emotional person, but I was surprised at how much more invested I was in the race when it involved another person’s success rather than my own.

We were grinning ear to ear when we crossed the finish line at 3:19 AM and Kim was handed her 70.5 mile trophy. 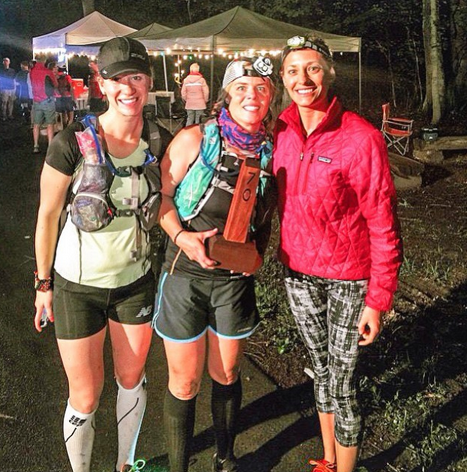 The next morning, we celebrated by doing 6 hours of the famous white water rafting in Ohiopyle which seems to have become a tradition for me. After that, we headed to the hotel to change, we gave Kim a cheers with the famous Michigan Oberan brew and I hopped in the car to head home.

It was one of the most memorable race experiences to date and one of those things that changes your life, just a little. Yesterday, I had a meeting with my coach and he looked at me with a tired face and said, “Let’s be done with the no sleep thing, OK? When I say time on your feet, you always manage to pull extremes.”