It’s been 2 weeks since I headed up to Parry Sound for my final 24 hour event of the year and I figure it is high time to do a race report.

Wilderness Traverse was held October 3-4 in North Muskoka District Ontario, Canada. As usual, I was racing with the boys of Team Ripkin.

Wilderness Traverse is a 24 Hour Adventure Race hosted annually in Ontario, Canada. Teams of 3 or 4 navigate using map and compass over 150 kilometers of rugged Canadian Shield back-country on foot, mountain bike and canoe. It is one of the toughest team-based endurance challenges around and simply reaching the finish line is a massive achievement. 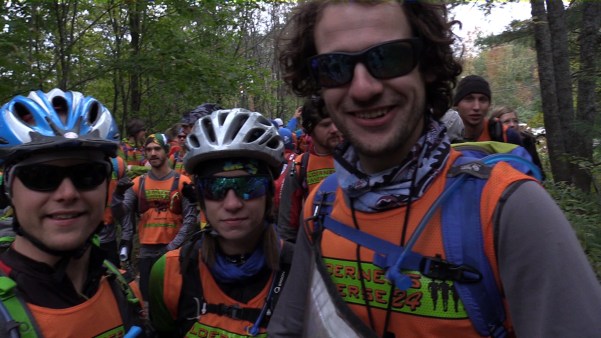 Team at the start line

We headed down on Friday afternoon and set up our drop bins for the transition areas, went to the team meeting to get our maps and plot our routes and camped out in Jake’s trailer at the race start.

The morning of the race, we downed some waffles and headed to the start line for the first leg which was a 4 KM run. 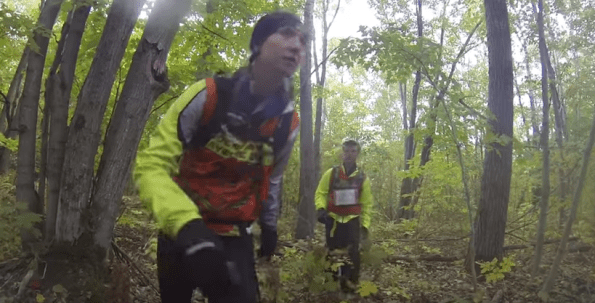 We then transitioned into a 20 KM mountain bike and grabbed a few check points. 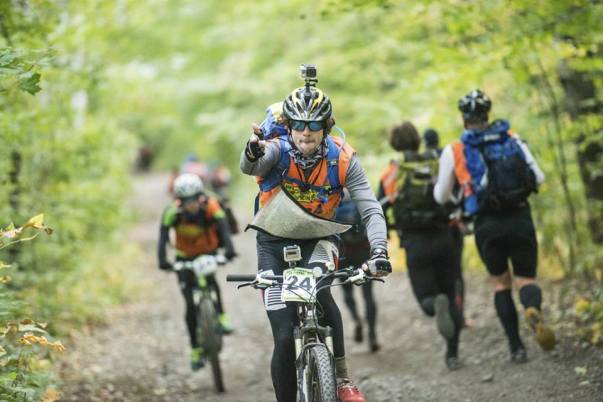 We dropped our bikes and headed out on a longer trek that took us off trail for some bush wacking. We saw a black bear at this point and we were making jokes about the fact that we would be trekking all night as we had a big trek portion that would inevitably take place mostly in the darkness.

Upon completing another fun little trek portion and finding a number of check points, we transitioned into the paddle portion of the race. 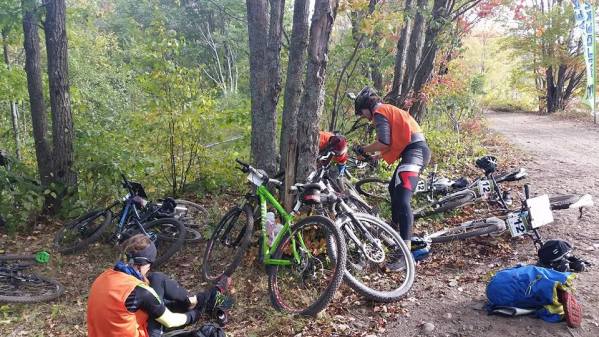 I am not going to lie – there have been more comfortable moments in my life. There needed to be three in a canoe for this 36 KM paddle and I ended up in the middle. I was paddling in an awkward position and water was sweeping into the boat as we were headed into a windy Georgian Bay. We passed the time telling off-colour jokes and to be honest, this will go down as one of my favourite sections. We were cold and uncomfortable but we had some fun portages and we were laughing so hard we were almost crying. 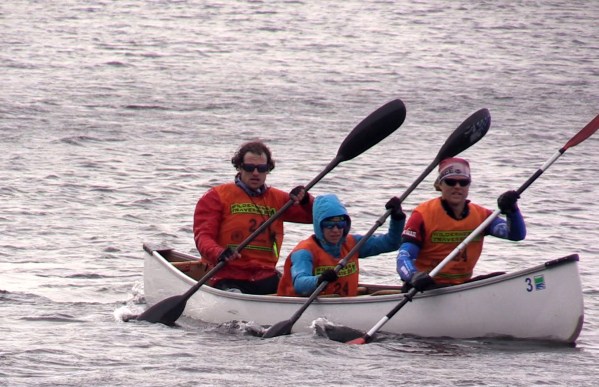 When we completed the leg and transitioned into the trek portion, I was quite honestly the coldest I have ever been. I was violently shaking and needed to change my base layers in the wind in order to ensure that my core remained warm for our overnight trek. I downed a cup of hot chocolate, put on my game face and headed out on the trek. 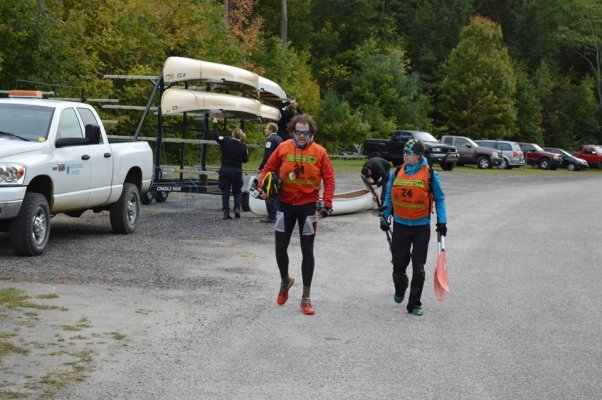 This was a LONG TREK. Brad had been consistent and basically perfect with navigation but we knew that with the darkness and the amount of swamps and bodies of water we were about to face that night time navigation would be a different story. 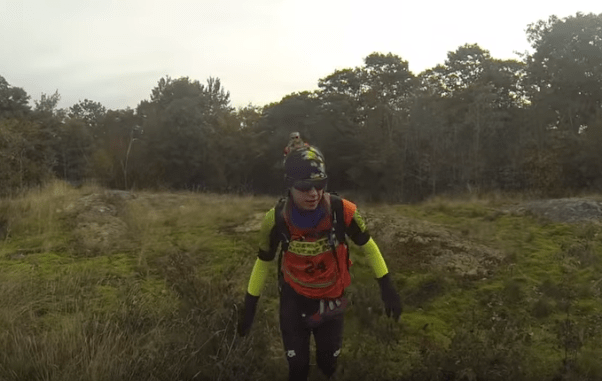 We were trying to be so careful to stay dry and did well as we headed into our last check point before darkness fell. They had a warm tent and we drank a cup of soup and ate some Reeses chocolate before heading into the night time navigation with our head lights on. 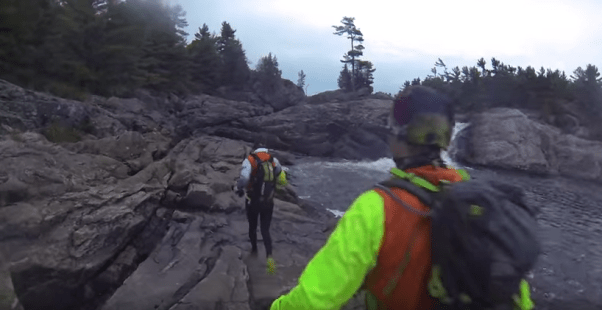 We kept hitting marshy areas that caused our feet to get soaked, but it was only when we hit deeper rivers that things started getting fun. We finally came to a river crossing with a tree that had fallen beneath the surface and we carefully moved across the river by holding on to the tree with our hands and feet and getting fairly wet but keeping our core dry. 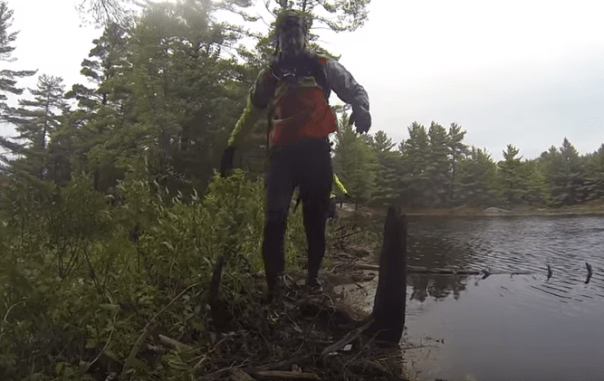 Not the same tree, but you get the idea – lots of water. It was amazing.

We then hit the swamp from hell. It had moving bogs that we needed to jump across and if you happened to misjudge the distance, you were going to get wet. Oh – and it was raining at this point as well. There was one moment where the ground had moved so my team mates were able to get across perfectly and as I went to join them, it floated away. I was standing with a huge gap between me and my only way out. I may have let out a little whimper because I knew I would get wet, but I went for it and we carried on. 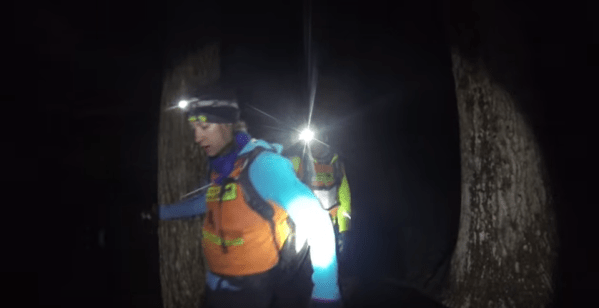 And yes, I was still having a blast at this point. We kept talking about how few people go and spend the night exploring the Canadian Wilderness with their friends. I always feel so lucky when I am doing adventure races because every time, you get this incredible rush that you are doing something that no one else does and it is one of the most fun things in the world. Everyone else is getting married and having babies and I’m just running around in the wilderness like a feral little animal.

About an hour later, we came across another river and Brad said “At least it has a tree under the surface so we can get across…”

And we then realized that we had completed a giant circle. I am not a navigator (yet) but it stressed the importance of following the bearings when you cannot see land features. This was the only time that his navigation was not basically perfect. We stood there in a line for a couple miserable seconds and pushed on.

The biggest thing I have learned in adventure racing that you need to keep your attitude in check. If you show weakness, it affects the entire team and I am so fortunate to race with professional and level headed athletes.

The trek felt long but we had the added excitement of running into a porcupine on the trail. We arrived at the approximately 70 KM bike portion and I began to feel exhausted. I find I always struggle the most at all night races about 2 hours before the sunrise. It was raining and we were riding a hydrocut and I became an absolute princess. This was the only part of the race that I didn’t fully enjoy. 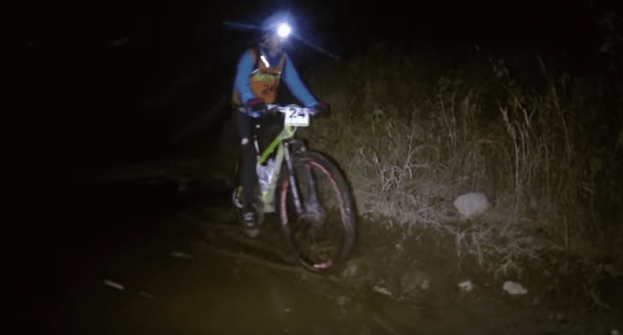 The rocks were wet, my head lamp was dying and I was terrified of falling on the wet rocks so I kept hopping off my bike to run down the steeper inclines which only made the situation worse because then mud became stuck in my cycling shoes and I would feel even more unsafe.

I have mental grit in most things unless I start experiencing fear and then I fall apart. One of the inevitable jokes of the race was that I was basic and frustrated there were no lattes on course…Brad and Jake were so lucky to have me there at that point. 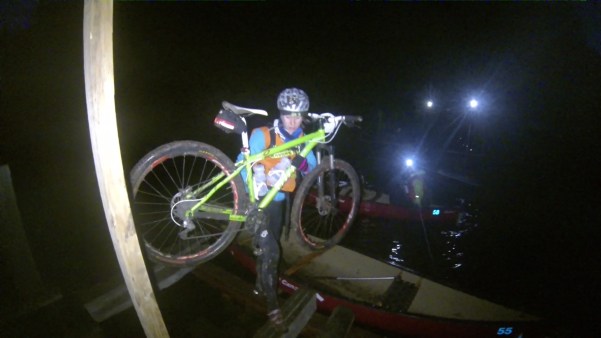 Night water crossing with my mountain bike. At this point, I couldn’t EVEN.

We hit the paved roads and I hit my stride and started having fun again just before the sun came up. We picked off hills and check points and finally arrived at the last check point of the race before setting out for the 25 KM ride back.

With my accident a few weeks earlier, I was not eating much in general and certainly not enough for me in this race which is where I made a big mistake. We were pushing out the hills and paved roads and I was feeling like a rock star and we saw another black bear on our ride. We stopped for food and caffeine pills and I declined both, saying I was good. I was – and we had about 15 KM left. What could go wrong?

At 1 KM TO GO, I hit a wall harder than I have ever hit a wall in my life. We were pushing through sand and I fell behind. I had no adrenaline to push me to the end and I tried to yell out for my team and realized I couldn’t talk properly and panicked even more. Brad was an amazing captain at this point and he rode with me and gave me the pep talk I needed to get to the finish line.

We finished in under 26 hours as the second coed team. I gave a weak excuse for a post race comment for the camera and crushed a chocolate milk and headed to the trailer to sleep for an hour or two before the awards ceremony.

There is no sleep in the world that feels like the sleep you have after an adventure race, even if it is just an hour. This is my second adventure race 24 hours or longer and I was excited to see I have improved. I was explaining to the team that I am starting to figure out where my limits are, what speed to race and how much to fuel. I am looking forward to seeing where I will be in a number of years when I am more comfortable with the time out in the wilderness, the night-time racing and the disciplines of adventure racing. It is by far the most exhausting, demanding and rewarding type of racing I do but I find I need to take a much longer time to recover from it than most other races I do.

Will I do it again? ABSOLUTELY. 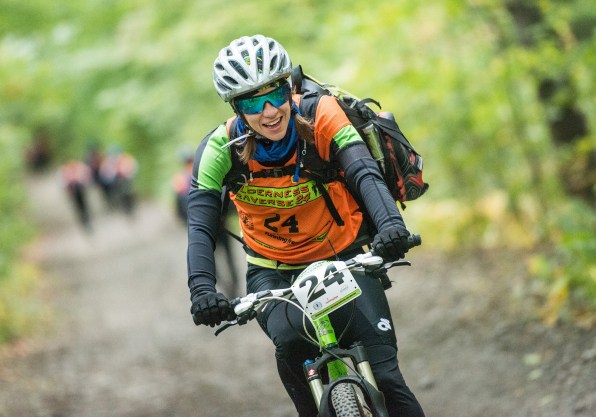 I just am taking a bit of an off season right now to get back to full health and get ready to crush my race goals in 2016!

Want to see more? There was a documentry filmed on the race which I will share when it is completed, but my team mate Brad did a full race report here: