Todd (one of my very best friends) and I were on a late summer long ride last year and we started talking about what we wanted to challenge ourselves with in 2016. Todd mentioned he was thinking of doing a half ironman. I had announced last year that I was planning on doing the Muskoka full, but as it was cancelled this year, I decided to tackle the half in July.

We brought the idea to some of our friends and because they are just like us, they agreed in a heartbeat. We know we are all pretty new to the triathlon world, so Genuine Health agreed to help us with our sports nutrition while we are training for the notoriously difficult Muskoka Half IRONMAN. The athletes come from all walks of life and share one similarity – this is the first half IRONMAN we have ever done.

I will be doing a monthly feature where I update you on how we are doing in our training, nutrition and some of the biggest things we have learned that month. This month, I wanted to introduce you to the Genuine Health Half Ironman Dream Team. For the rest of the week, I will be rolling out the athletes. We are starting with Todd Shannon. 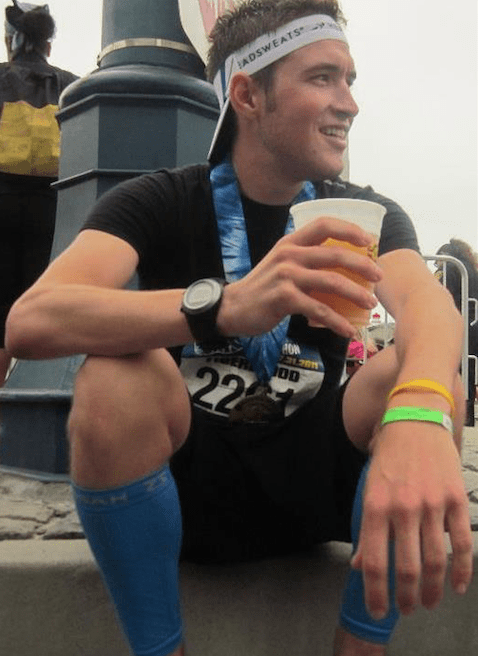 A Little About Me: I’ve been running for just over 9 years, and have since finished 10 marathons, around 15 halfs, and a handful of ultra-distance runs. In that time, I’ve deviated between serious training and just running to stay fit, with the majority of my time usually landing somewhere between the two.

That said, I am the very definition of a middle-of-the-pack runner. I’ve never come close to placing in the Top 10 of a race; never done better than 3rd in my Age Category (and even those were fluke-ish and more dependent on who else showed up) (EDITOR’S NOTE: This is actually a lie. Since sending me this, Todd placed fourth OA in a race. Apparently it just needs to be -40C) ; I’ve never qualified for Boston (despite trying my darndest); and often use running both as a relaxation tool and for brainstorming for my day job.

I’ve been involved with the non-profit impossible2Possible for a number of years (which educates, inspires and empowers youth) and I’ve recently started volunteering with the Achilles Foundation as a guide for blind runners – which, so far it’s been an incredibly uplifting experience. More importantly, it has helped me remember the true reasons of why I run, and helped reset my priorities and ensure that I don’t take my performance too seriously.

My training load from running is probably considered “intermediate” – 3,200km last year (a weekly average of 60K and between 5-10 hours of training), and I’ve been (knocking on every piece of wood I can find) pretty-much injury free in my running career. My endurance engine is not terrible, as I’ve been able to do 220km on a bike in one shot (featured on this very blog!), and ran for 12 hours (and 105km) in 2014 as a fundraiser for Movember and in memory of my Grandfather who passed away from cancer (shout out to Gramps!). 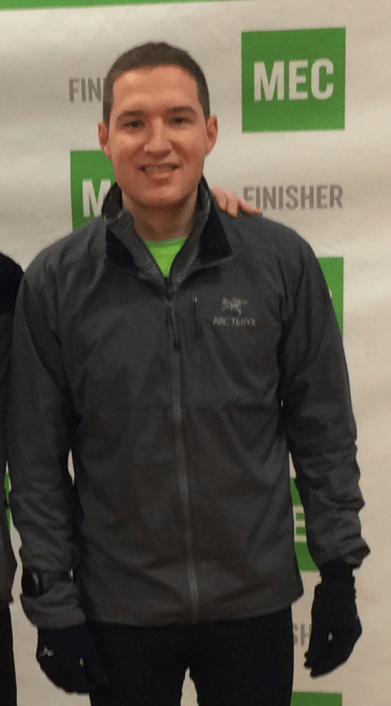 The Why: So, why am I doing a half Ironman? After steadfastly focusing on getting faster and gunning for a BQ last year (I fell 36 seconds short…), I was looking for a change of pace mentally and physically.

Throw in that some of my favourite people had wanted to do a 70.3 (spending time with them in training is truly the best), and here I am. What’s more? I’ve never done a triathlon in my life….not even a Sprint, and I don’t intend to before the big day. I figure it’ll be more fun that way (both for you and for me)…

The How: It’s an understatement to say that I have a demanding day job, but I do make it a priority to fit in exercise where I can, and from now until July I’m setting the unofficial goal of doing each discipline at least once a week. (EDITORS NOTE: He is rocking this)

I’m going to more or less stick to the 5-10 hours of training a week I’ve done traditionally, but just distribute that amongst more sports than just running. Below is a recap of my current baseline for each discipline, and where I hope to end up in July. 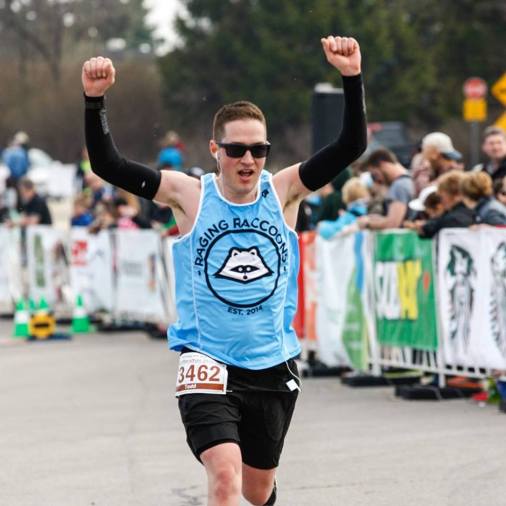 Swim: I’d rank my current capabilities in the water as 2/10. I’m not particularly buoyant, and as a child I was petrified of the pool (thus avoiding it to mostly play Super Nintendo instead) so I’m starting more or less anew. So far, I have mastered alternate breathing (thanks to Youtube videos), but this will definitely be my biggest challenge in Muskoka. I have been swimming about twice a week since last November, and I have found that by focusing on keeping my heart rate down, relaxing, and having good form, I can at least get by.

Currently, I have been completing 2K in the pool in around 47 minutes, so that correlates to around 45 for 1.9K. So I figure if I can come in at 45 minutes on the big day I’ll consider that a win.

Cycling: While thunder thighs definitely don’t exist on my body, I consider myself a 5/10 on the bike. I’ve done many rides in excess of the 90K required in the 70.3 event, so it will really just be a matter of speed and nutrition. This past year I bought a bike trainer (on black friday, on sale – see below…) and have been using it indoors for a few weeks now.

I can ride all day at 25km/hr, so am hoping to push it to nearer to 30km/hr on race day. Factoring in some big hills, and I’d like to finish the bike portion in 3 hours and 10 minutes if I can. 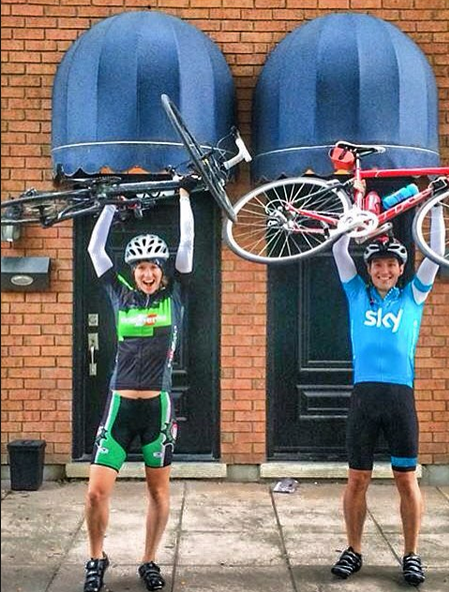 Running: As per the above, I consider myself a 7/10 on the road. Perhaps naively, I’m hoping this will be the easiest part of the event. My half-marathon PB is 1:26, and factoring in some mega hills on the Muskoka course, and the fatigue of being 4 hours deep, I’m thinking 1:45 or faster would be a decent guess at what I can expect to cap off the race.

The Goal: Budgeting 45 minutes for the swim, 190 for the bike, and 105 for the run adds up to 5 hours and 40 minutes. Factor in 10 minutes for transitions, and I’ll be more than pleased if I can bust 6 hours on race day. 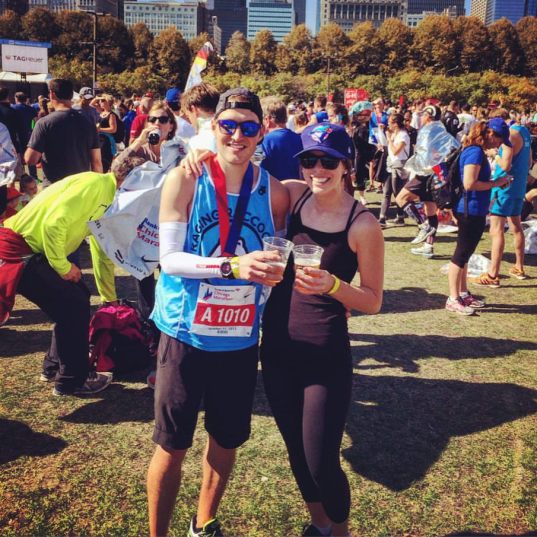 Epilogue: Some other fun facts/tidbits for you:

Sir Bonksalot: My biggest potential foil on race day is the possibility of the bonk; I basically have a Ph.D in bonking. I lose a lot of sodium in my sweat, my blood sugar sensitivity is precarious, and I tend to have some issues with not eating as often as I should in a race. As a precautionary measure, I’m recruiting Latte to be my nutritional conscience/sidekick for the race and asking her to force-feed me at pre-determined intervals in order to be able to Rise up and Overcome. (EDITORS NOTE: I have the wonderful fortune of owning the moniker of Latte among my nearest and dearest.)

Egg Beaters: It has been observed that I have a bit of a leg whip when I walk. When running, it turns into a full on centrifugal sideshow. That said, it acts as a good marker for spectators. So, if anyone will happen to be there to watch…you’ll see me coming from miles away.

Nutrition: I consider myself to more or less follow the tenets of good nutrition. As a heavy coffee drinker, I focus on balancing my pH levels, and like to begin each day with a green smoothie. This also led to a relatively hilarious situation recently where I put a hefty scoop of some new Protein Powder in the blender, whirred it, and drank the container nearly empty. It was then I discovered a gritty texture and little bits of paper in the bottom. To my chagrin, I had blended and consumed an entire Silica packet that was in the container (it was totally buried in the scoop). After some frantic Googling I determined I was not going to die, but vowed to more carefully “watch what I eat.”
I also like races that have Peanut Butter or Beer or as part of the finish line spread…(I hope you’re reading this, Ironman organizers…)

Budget-minded Bert: As a notoriously cheap (or value-conscious…whatever you prefer) individual, I am vowing to do this race without incurring too much of an expense. This means no coaching, no fancy fitness memberships, and no snazzy new gear. I acknowledge this will probably make things harder on me, but that’ll be part of the fun.

Here We Go: I’m hoping that our dear readers will view me as “the everyman” of our group. I don’t intend to take myself too seriously, and I’ll probably survive – but it won’t be easy – and hey…if in the end I can do it, hopefully others will see that they can as well. 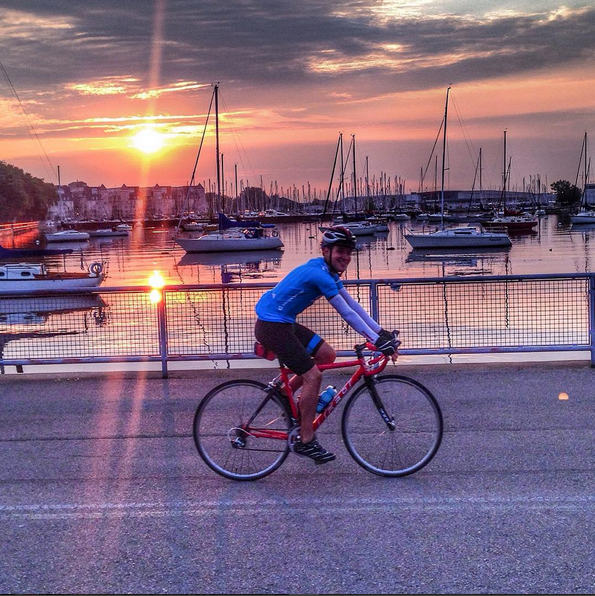