Last month, I rolled out the dream team for IRONMAN 70.3 – a group of newbies to the triathlon sport who decided to tackle the first triathlon together and put it out there for everyone to read.

It has been one month since we made introductions to Mark, Clare and Todd and it is high time to check in and see how their first month of formal IRONMAN 70.3 training went. 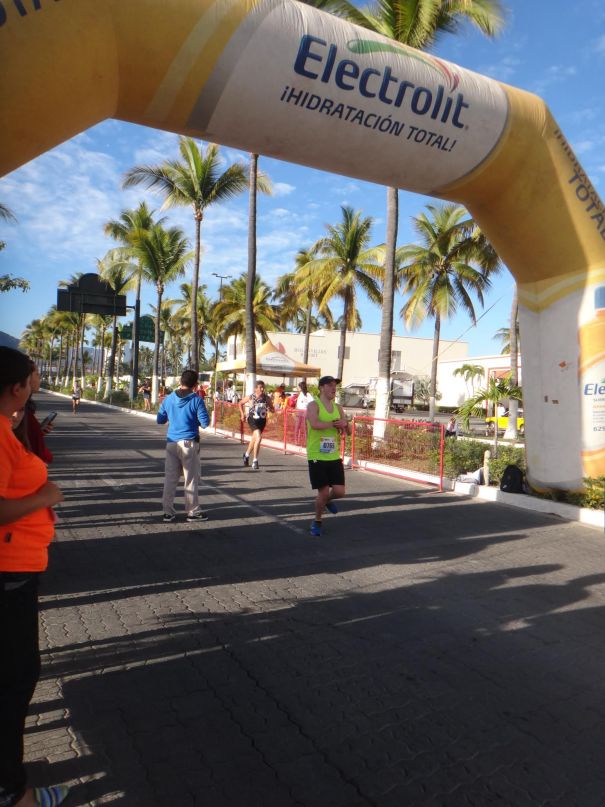 Training has continued to be consistent through March. I spent a week in Mexico with my grandparents, which was a nice change of pace, but led to some challenges with cycling (zero km) and swimming (doing laps of a circular pool adorned with fake rocks and palm trees and avoiding children barreling down the slide at Mach 5 was less than ideal). That said, the running was AMAZING, and I even found an impromptu 5K race to enter and some hills to mimic the Muskoka route.

Been keeping strength training up, and that’s been continuing to add some newfound stability and balance. Only folly was when I did what is coined “The Prison Cell Workout”, which is the max number of burpees in 15 minutes, and woke up the next day unable to move my left leg. It seems that when I come off the ground back to a standing position I would lead and plant my left foot, which repeated 200x led to being crippled… Small roadbumps in my quest to go from a body composition of 0% muscle to 1%. At least I got to eat homemade dessert every day (my grandmother is a wonderful cook)…

• Swimming:
I’ve been hitting my 2k weekly goal so far, and while I’m not getting any faster in the water (picture a barge full of garbage and with no working motor or controls and that’s how I appear in the pool), I am finding that I am expending less effort with each session. Clare has helped me make little tweaks (like closing my fingers so that water doesn’t pass through my hand) that I think are helping the cause. 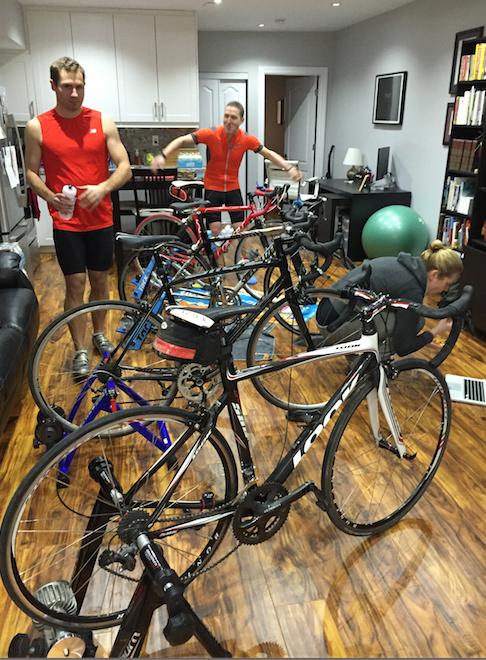 Ermmm. Apart from our 4 hour team ride, this area has been one of neglect. Marky and I did get out for a tour of High Park, but after being repeatedly dropped on hills (a passerby actually stopped and said to me: “Doesn’t it suck that some people can go up hills like they are in an elevator, and here you are sucking wind?) I decided to just wait for better weather. EDITORS NOTE: You have not biked until you have been dropped like you are standing still by Marky.  I DID take my bike for a tune-up and new tires, and once the thermostat hits 5 degrees or warmer I intend to start doing at least one long ride a week.

• Running:
At last, my strong suit. I was more than pleasantly surprised when the impromptu 5K race turned out a 15-second PB. My weekly mileage has held steady around 50-60K, and I’m feel really good so far this year. Ramping up for the Ottawa Half Marathon in May (though the Genuine Health 70.3. Team intends to test our fitness again at the Elmira Pancake Mile – you can tell I am excited about this) which should be a good gauge of where things sit for Muskoka. 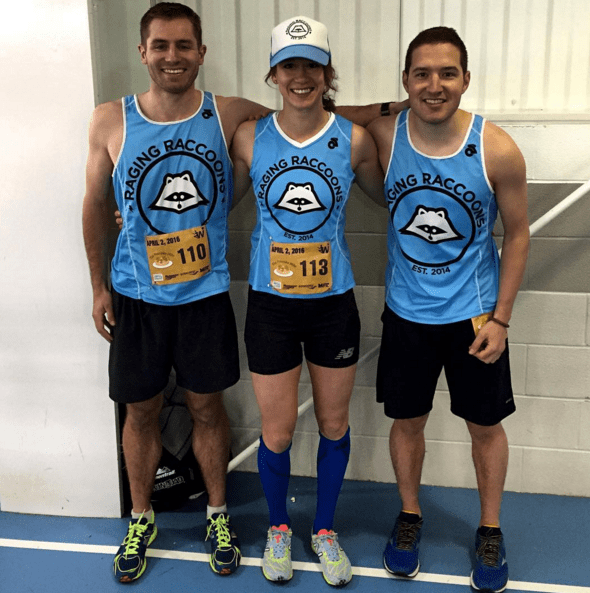 • Nutrition:
Not-so-shameless plug, but I think it’s important to mention: I’ve started taking Greens+ in the morning when I get up, and have found that my energy levels have been much steadier throughout the day, which is important now that I’m beginning to do some after-work workouts. Usually I would workout in the morning, crash in the afternoon, and want to do nothing but sleep at night. So there is relief if that describes anyone else’s day.

Otherwise, I’m subsisting on a steady diet of Rumble Shakes and PB sandwiches. Onwards to April! 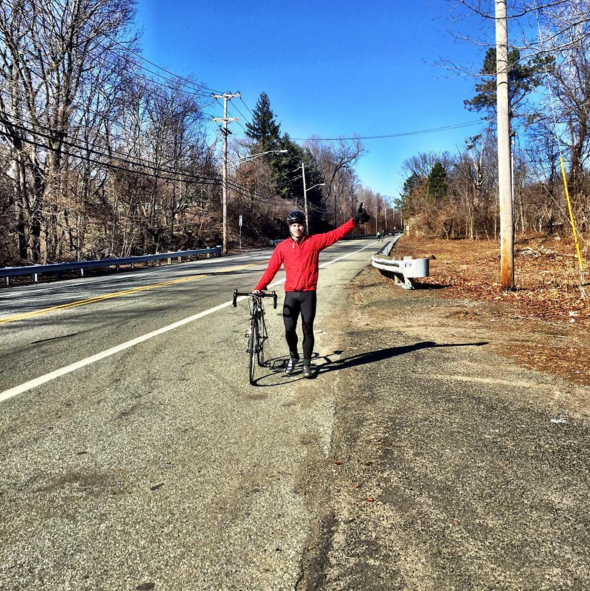 March was an exciting month as I made my return to running after a nagging calf injury. The improvement in weather allowed for more outdoor rides which was a nice change from the trainer slog. I joined Peter, Clare and Jess for a little retreat to take on the IRONMAN 70.3 Muncie Bike and Run courses. 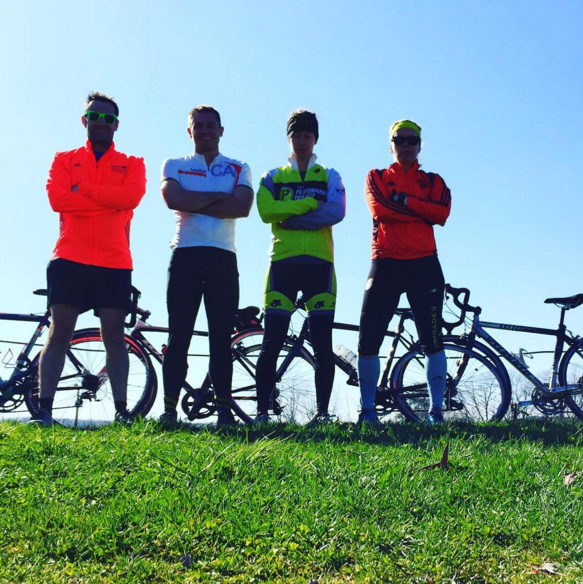 Running:
I’m very excited to return to running after a calf injury that put me out of training for a month. It is all healed but I am still thinking long term and am doing a slow mileage build with a slow reintroduction to speed work. This month, I tackled the Pancake Mile in the RunWaterloo series and plan on doing the Angus 10 miler in my hometown and running the Boston Marathon as a tempo workout.

Cycling
This has been my strongest discipline in March and I have averaged 120 KM/week. I have been doing a long ride and have worked on some solid one hour sessions and sustained effort at the IRONMAN 70.3 pace. Climbing and speed has started to feel more comfortable which is reflected in my heart rate being lower at the same intensities. It is exciting to see progress. I have done two 100 K rides in March and kept the streak of monthly century rides alive.

Swimming
This one, I have been slacking on. I have made it a personal goal to swim twice a week, starting on April 1. EDITORS NOTE: We are holding him to this.

Nutrition/Strength
Strength work has been a huge key to my return to running and something that I am sustaining to help stave off injury.

Nutrition has been great. I have made a big effort to bring lunch to work every day which results in healthier eating for me. I have also been using my Genuine Health Greens+ and protein powder in post workout smoothies and noticed a huge benefit to my recovery. 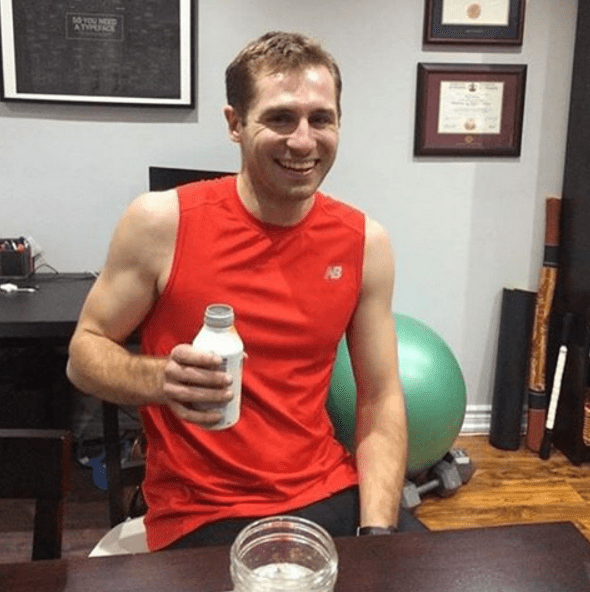 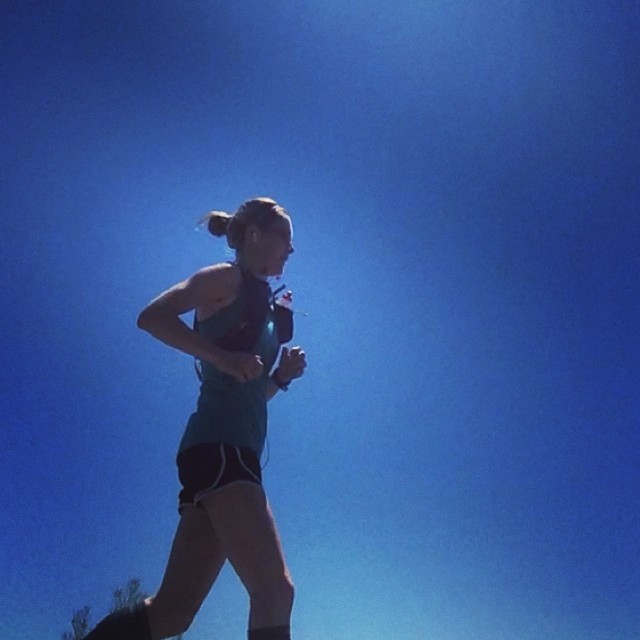 I have been concentrating on building a base for all three sports and have hit 18 ½ hours; 17 ½ hours; 18 ½ hours and 16 ¼ hours for the month of March. However with some sign of a return of some running fitness and Boston marathon looming, I decided to introduce some speed work into my running schedule. I don’t LOVE speed work and I am not fast, I really am at my happiest at a nice steady pace but in order to try to maximize my training, I’ve introduced two speed sessions a week.
Todd has been focusing on strength training, and I have been trying to mimic his lead but I am finding it difficult to find time for more than one session a week. The Academy of Lions on Ossington, hosts community classes 4x a week (Tuesday, Thursday, Saturday and Sunday). The community class focuses on body strength and functional fitness and is open to everyone. The classes are 45 minutes Tuesday and Thursday and an hour on Saturday and Sunday. I have been making the Sunday class but my goal to get to one of mid-week classes too. 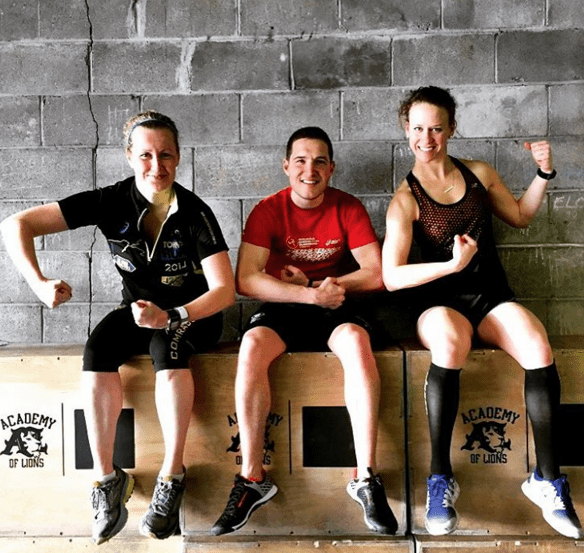 Swimming:
March Recap: I’ve been hitting my 2x weekly goal so far, and while I’m not getting any faster, I am much more comfortable and feel less and less like I am drowning. The coaches at Atomic (I go to one session a week) are very experienced and talented bunch and we continue to make progress on stroke and breathing, etc. that are helping me feel more in control of what I am doing in the pool. At the Atomic session we do drills and speed work and then on my second swim when I am on my own or with Todd, we tend to focus on endurance.
April Goal: To step away from the slow endurance only sessions and to ensure I am doing some speed work in every session.

March Recap: I have been able to get in the hours and have been trying to get on the bike 6 days a week and averaging five 60 – 90 sessions with some speed drills and one long cycle of 3-4 hours. I completed nearly all my rides indoors including an awesome 4 hour team ride/ trainer party at Todd place. Marky, Jess and I did get out for a quick spin out to Port Credit and a couple of laps around High Park, (cycling with those two on hills is soul destroying……) but with my chain jumping and slipping when I tried to climb I realized I need to take my bike for a tune-up (which involved a new chain, cassette, break cables and new tires- i.e. more than I initially spent on the second hand bike). But now that all my excuses were gone, Marky, Jess, Peter and I took our bikes down to Indiana to train on the Half Ironman course in Muncie! Down there I completed my first outdoor metric century!!!! I was thrilled at how my fitness had improved and was thrilled that the 100km didn’t take that much out of me (disclaimer: the course was pretty flat – 389m climbed and I was ~20 minutes behind Marky and Jess). EDITORS NOTE – She neglected to mention she kept circling back for her partner, Peter and was able to hold a comfortable 30+km/hr the next day on a cycle. She is a force on the bike.
April Goal: To get outside for at least 2 rides a week and concentrate on hills!!!!

Running:
March Recap: I finally feel like I am making some progress with my running. As I mentioned above I have been adding in two speed workouts a week and have really started to notice that my average pace is improving (slowly moving away from the 5:45-6:00 range) and my average heartrate has really come down from an average of 170ish to 150ish. The half Ironman course in Muncie was satisfyingly difficult, it was full of rolling hills but none too hard that would crush you but hard enough for it to be a solid effort. I ran my fastest half time in over a year and felt reasonably comfortable in doing so. I am running Around the Bay this Sunday and going to try to run it as 10km easy; 10km effort; 10km easy…….. fingers crossed! I don’t want to work too hard as Boston is only a couple of weeks away but as this 30km will be my one and only 30km+ run prior to Boston, I want to make it count! Unfortunately the weather is not looking good but either way I always enjoy the course! EDITORS NOTE: She crushed it.
April Goal: Enjoy running Boston!!!!!

Looking forward to April training with the group and getting in some more training weekends!!!

Some team training photos from March: 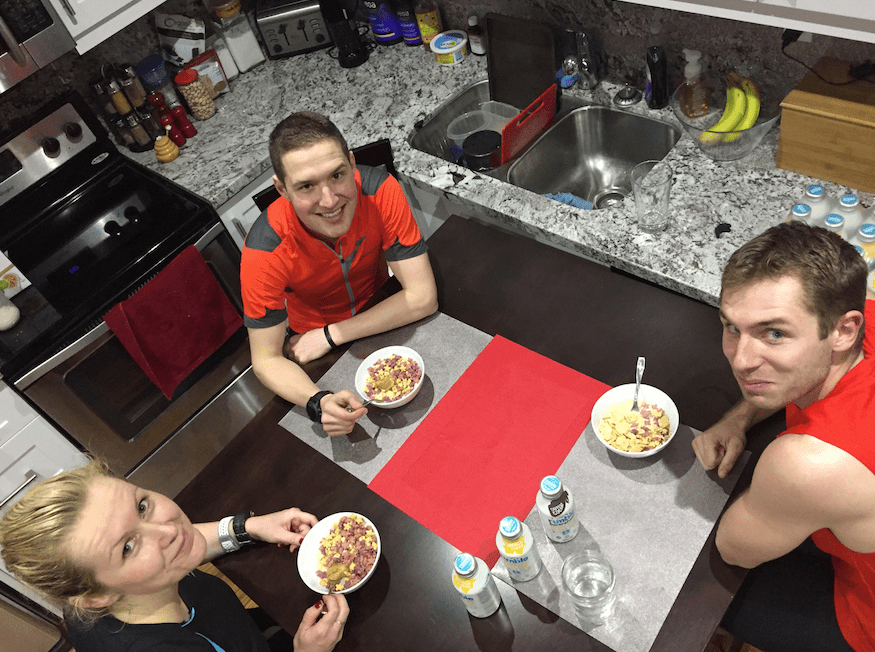 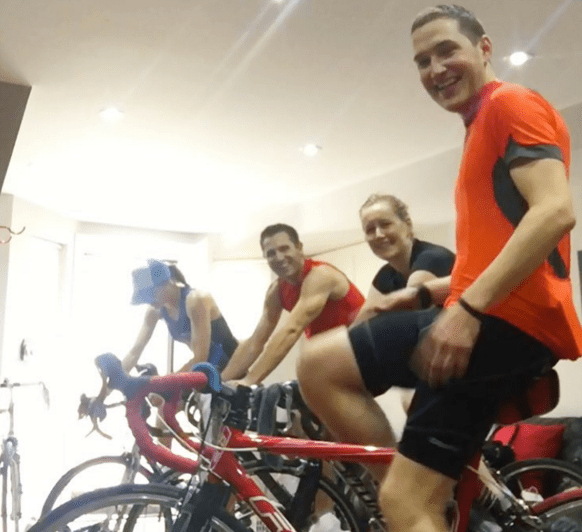 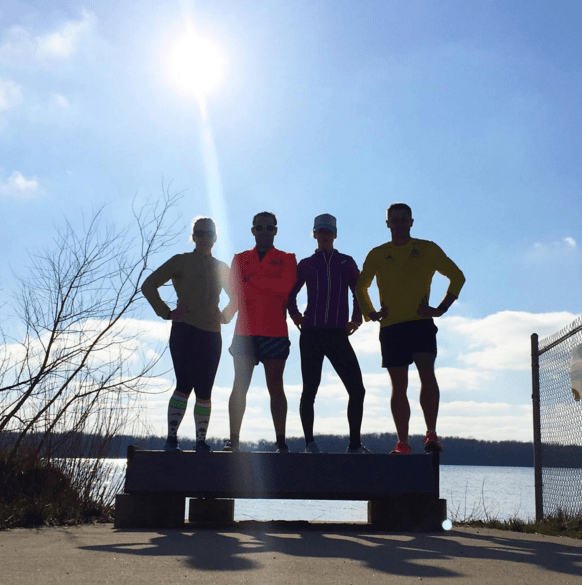 This team is being supported with coaching programs from Dave Galloway of the Performance Project and with sports nutrition from Genuine Health.