This past weekend, I headed to Lake Placid for my first triathlon training camp. My coach, Dave Galloway, was putting it on as he has a number of athletes competing in various triathlons this year and he had an awesome weekend planned with open water swim coaching, long rides and practice running the IM Lake Placid course.

I felt a little out of my element but of course I said yes and headed up on Thursday night with Clare from the Genuine Health triathlon team. We arrived at 2 AM and had a quick sleep before meeting the rest of the crew at the training camp the next morning.

What an amazing group of people! We began the first day with a 90 KM ride out on the course and it was stunning. It was a challenge with all of the hills but my training plan from Dave and adventure race mountain bike background this season kicked in and I had a blast on the course. 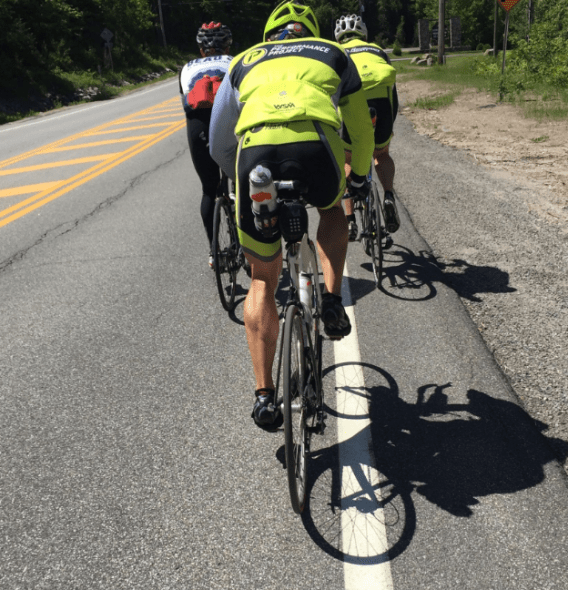 The afternoon was an open water swim where my coach was in a kayak and working alongside the athletes, giving adjustments and suggestions for improvement. I was an interesting case because I was working from ground zero but from the first day, we established through a closed eye drill that left to my own devices, I would turn a full 180 in 40 strokes or less.
Needless to say, I did a lot of work on smoothing out my stroke and working on my sighting. 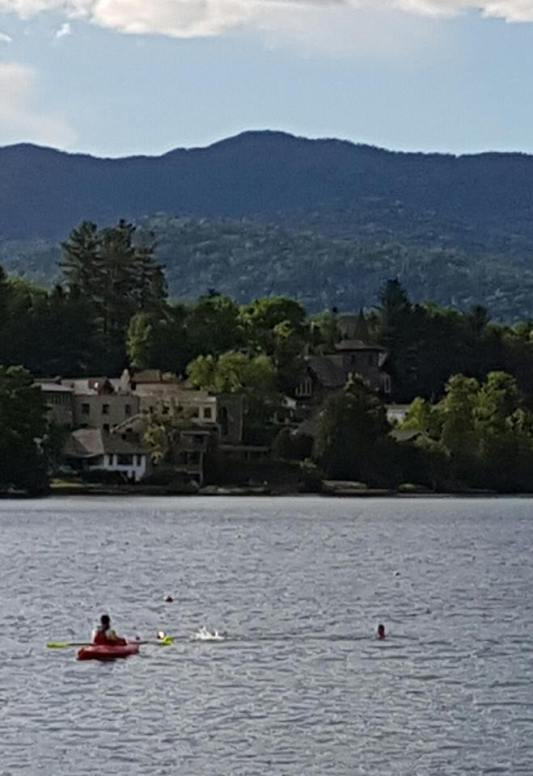 The second day, we cycled 65 km which sounds underwhelming except it was up one of the highest peaks in New York, Whiteface Mountain. It was 13 km of solid climbing with an elevation profile like this:

What a climb. We faced incredible wind and rain while doing this ride. It was all I could do keep my bike upright and keep it moving forward at one point.
It was such a celebration to get to the top and we spent a while drinking coffee, warming our base layers by a heater that was there and taking in the view. 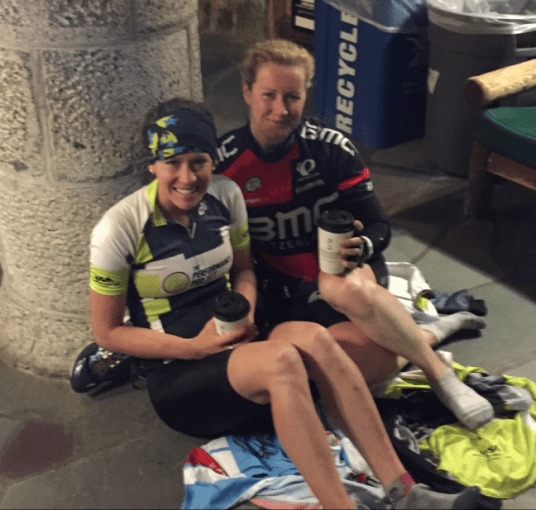 Clare and I stationed in front of the heater. We were doing our best to heat up our base layers. 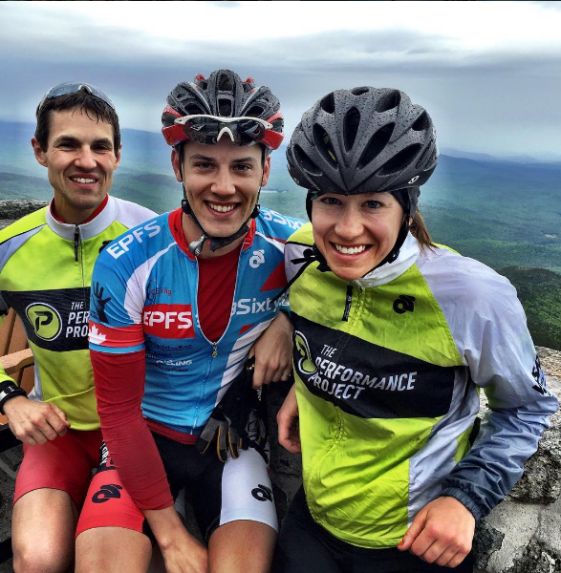 When we saw a break in the rain, we headed back down and what took over an hour to climb took 20 minutes of careful descent. 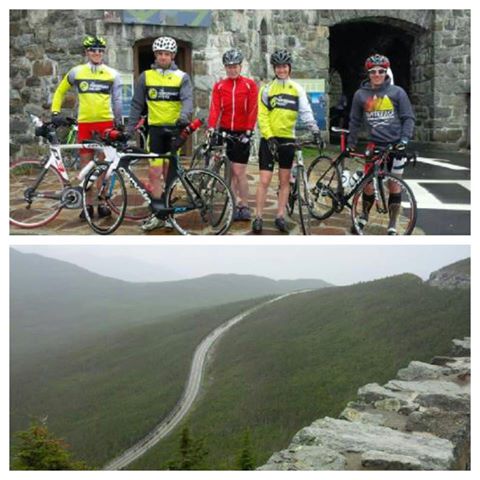 After warming up again, we pulled on our wetsuits and headed out to the water for another open water swim to work on our race starts. This was a short swim but I already noticed an improvement from the day before. 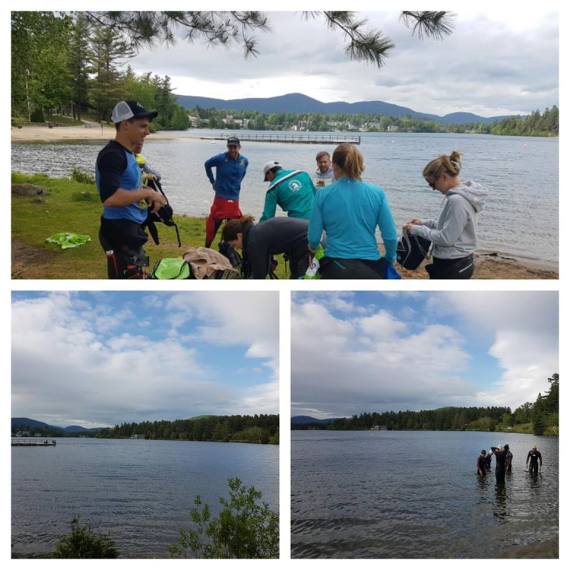 That night, we had a taco team dinner and went to bed before midnight to prepare for the race simulation the next day.

The morning of the race simulation was one to just suck it up and go. 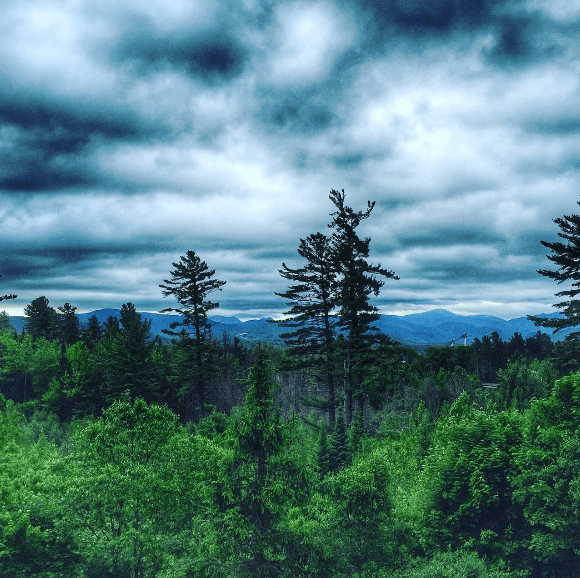 It was about 5C and threatening to rain. It was not fair weather in anyway but we all diligently had our pre-race breakfasts and headed down to the water where we did a 2 KM open water swim. I didn’t push this hard because it was the first time I have ever swam point to point this far so I focused on keeping my stroke smooth, moving efficiently and ensuring I felt amazing the entire swim. 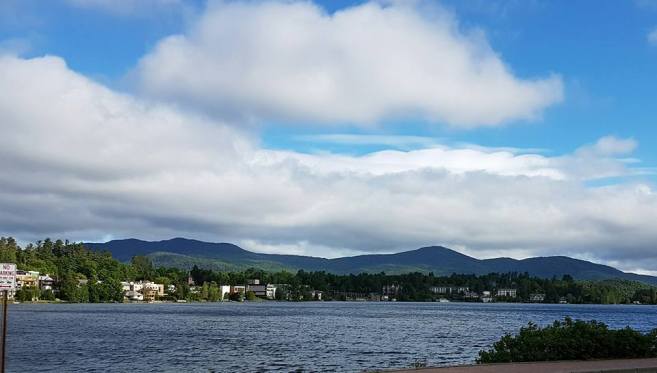 We headed back to the team house to have a quick snack before bundling up and heading out for a ride at race pace.
It was so cold that I had a shower to warm up and wore a merino wool base layer on the bike.

The first 40 km were amazing. I was moving quickly and had a faster average pace than I was expecting. I focused on some of my new learning such as not drafting other riders (fairly vital piece for triathletes, I’d say…) and efficient hill climbs. Then we hit the turn around point and the heavens opened up.
We were riding against a heavy wind on the way back and with the cold rain, it also began to hail and there was later rumour of ice pellets. All I know is that I had not packed my cycling glasses and it was a struggle to even see, much less hold race paces, especially as my hands and feet began to freeze.
I focused on just moving forward, occasionally taking a drink and reminding myself to eat something.

I was so relieved to arrive back at the cottage and took my time before my run, taking a hot shower and eating to replace some of the large deficit I had built up on the bike and stubbornly not replaced because I was too cold to eat.
About an hour later, I headed out on a run and found a gorgeous little trail with some steep climbs. I only went out for an hour but I felt very strong and confident coming back in.
Overall – this camp was a perfect set up for the half ironman and I am feeling very confident going into the race. 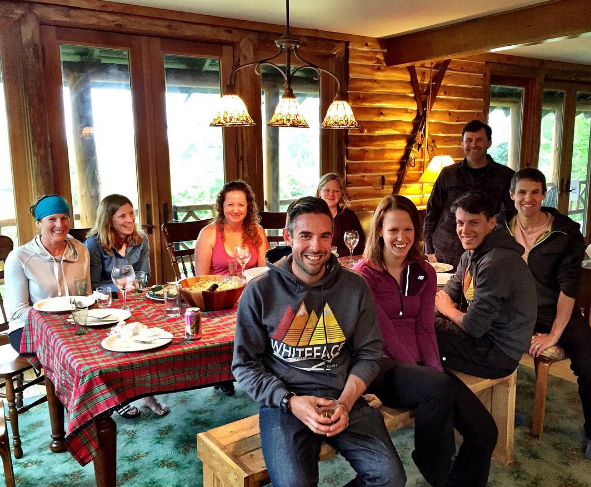 Some of my biggest discoveries? (This will seem obvious to you seasoned pros, but these were invaluable to me)
– don’t lift your head out of the water to sight. Incorporate it into your breathing. This keeps your feet high and swimming effort low.
– you should keep your wetsuit inside out to put it on, not just yank it on and hope for the best.
– when you are climbing, keep your bike pedal stroke even. Envision kicking over the top of the pedal and keep your circles smooth. No mashing.
– Take your bike nutrition out of packages and cut into bike sized pieces so you do not find yourself ripping open a Honey Stinger waffle with your teeth in the driving rain.
– Do not charge up hills. You want to save your legs for the run. Put it in a low gear and stay in zone three throughout the climb.

It was an incredible weekend and I am so fortunate to work with such an incredible coach and alongside such fantastic athletes. I have received a few questions about my coach and the Performance Project – you can see everything here but feel free to send me an email if you have additional questions. I also wrote an article on working with him over at Canadian Running Magazine. 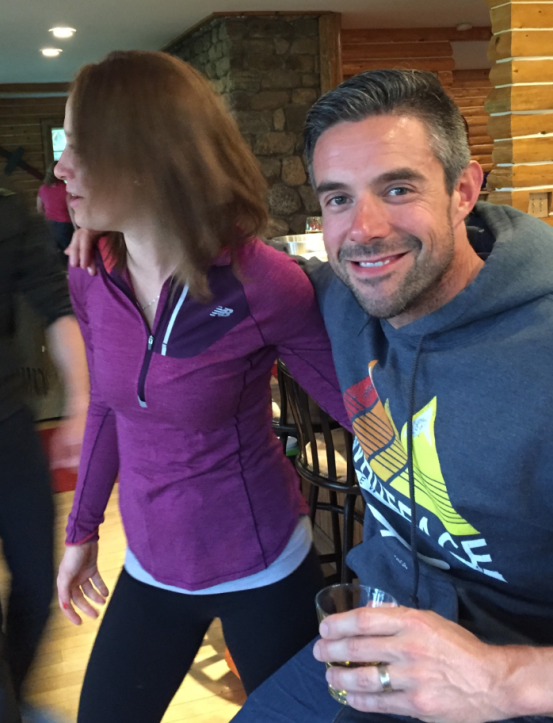 This photo perfectly captures why I need a coach. I lost focus while posing for a picture – I cannot imagine maintaining a smart or healthy race season without his guidance.

This weekend, I am doing some training in Toronto including a long ride in Markham, a swim at Cherry Beach and a long run along the Waterfront. I will be following up next week with a full recap of the Happy Mutant Adventure Race!