“So Jess, how EXACTLY do you plan to even begin to explain this race on your blog?” Brad asked me. It was 6 am on our fourth day of racing and we had been canoeing for about an hour. The canoe portion of an adventure race is one of the rare times that we can spend some time just chatting about life instead of strategizing check points, checking our nutrition levels and hustling through the back country.

Honestly, I still don’t know how to answer that question. The problem with adventure racing is that there is an endless amount of things to share because it is just so dang LONG. I knew this race would be different, but I had no idea it would be my favourite one yet. To keep this concise, I will break out each day.

The Team: Get Out There Magazine 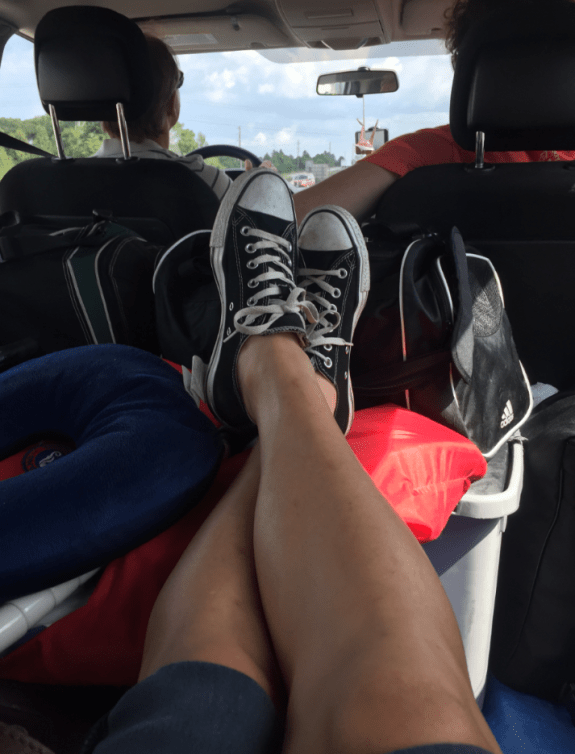 Riding down to the race

When Brad first brought me on the team, I told him that my first year of adventure racing (2015), I would just try to figure everything out, wrap my head around this sport and see if I was willing to stay and seriously commit to it. I did a 48 hour in Pennsylvania, a 24 hour in Parry Sound and a local sprint. This year, I was focused on developing technical skills such as paddling form and mountain biking technique. I told him by 2017, I was hoping to actually be competitive, but I marked this race as the kick off to my competitive race debut. I had a goal of podiuming this event and with some of the best international teams in our category, I knew it would be a challenge but I was gunning for third as a goal.

We arrived at the race location the night before to attend opening ceremonies, receive our maps, trackers and gear and headed to a motel before the Prologue. It was overwhelming to see teams from so many different countries and I just soaked up the experience. 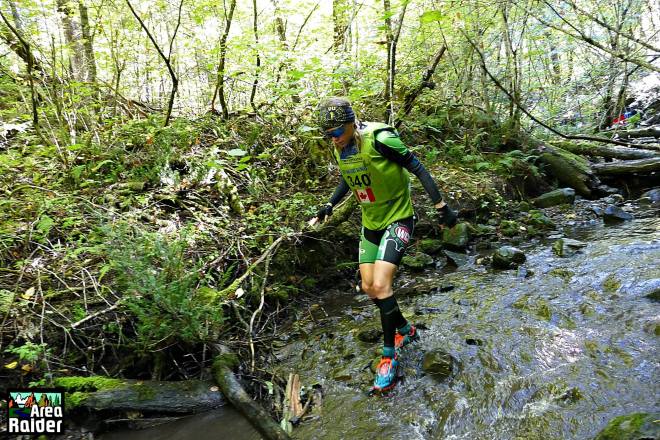 DAY ONE – The Prologue: The race kicked off at 1 PM which felt like forever as teams were hungry to just get out on the race course. We began with a mad run on the beach to canoes. We did a stretch of canoeing and portaging before hitting transition for a long bike leg. This day was riddled with disaster for us as Brad broke a chain and rigged it up wrong, causing us to run the remaining 4 KM to the final check point. The highlight of this day was the manhole that we needed to climb down to reach the finish line. We arrived to the finish line, tired and happy. 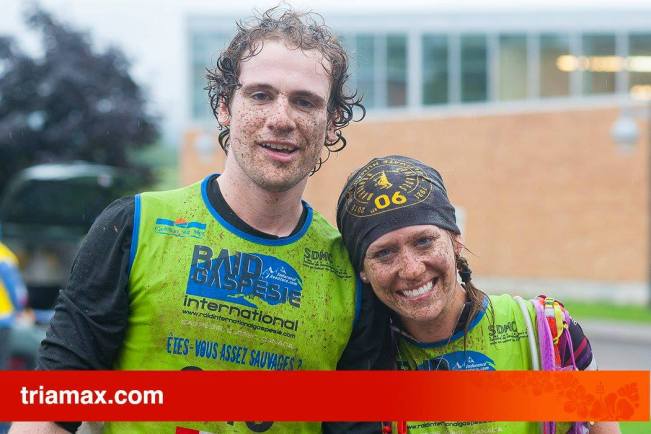 To be honest, half way through the first day, I gave up on my goal of being on the podium. I watched teams and time stream by and as we ran our bikes into the transition area, I decided to let it go. Misadventure IS the adventure and I was at one of the most fun races of my life. 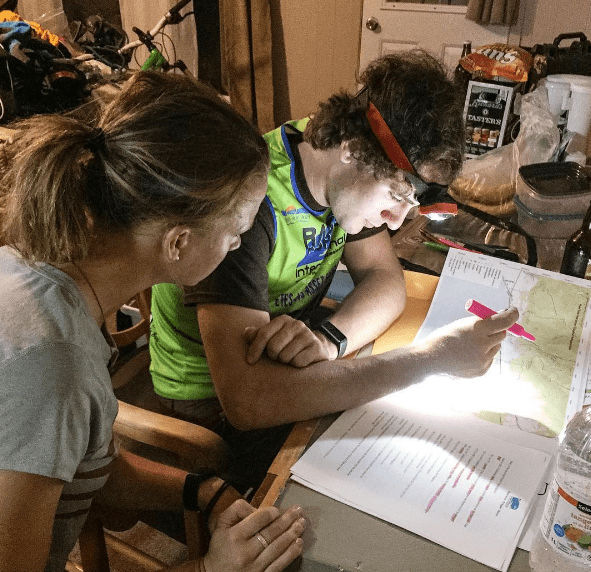 DAY TWO: Day two began with a flat tire. My mountain bike tire had a slow leak overnight from a thorn so we quickly did a tube swap and headed to the start line. We began the day in a cave. We brought our climbing harnesses and I went down into the cave to retrieve the passport for the day and we began the course on mountain bikes. We were not too far into the leg when Brad hit a branch which broke a number of his bike spokes and flatted his tire. We replaced the tube and continued on, but I still had no hopes for our placing with the endless parade of bike mechanical issues we kept having. We did a trek that saw me climbing up rope ladders over waterfalls and navigating wet rocks. 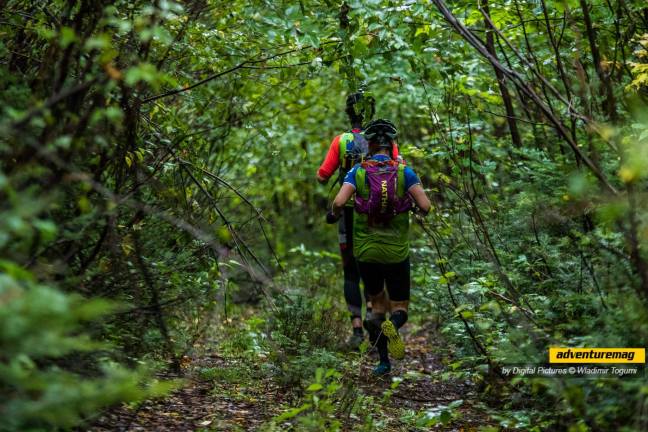 At the transition, we headed out on a paddle with check points that had us scrambling 100’s of metres up, grabbing trees and roots to keep us on our feet. The speed of this race was so different from what I was used to in a multi-day adventure race and it was absolutely exhilarating.

We were concerned about making the 5 PM cut off because we had started later than expected with the cave that morning. We hustled as fast as we could, but there were some unique check points that required a bit of caution, like diving out of the canoe into a salmon pool with a current. We arrived at the transition area at 6 PM to hear that due to the delay that morning, the cut off time had been extended to 6:15 PM and we had just enough time to transition and head out on a mountain bike leg. 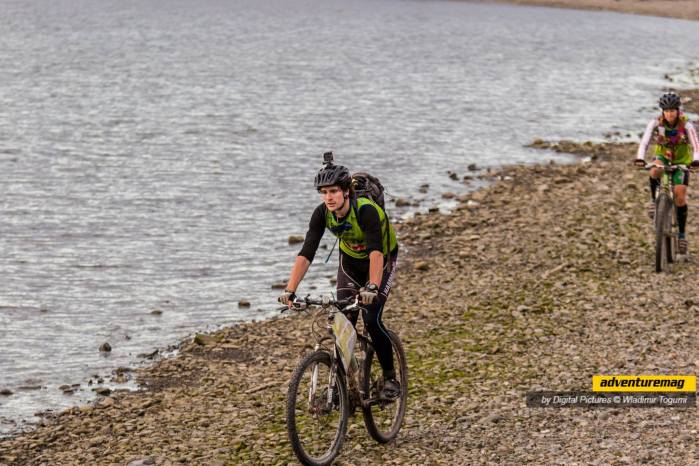 We ended up getting a little confused at a fork in the trail and met up with another team we were competing against in our category. Night was falling and we had a long leg ahead of us and our new friend, Christine suggested we just race together. This was one of my favourite parts of the race – we finished up the bike leg and headed out on a night trek. We swapped stories in franglais and Christine and I did the final zip line portion over the water to the finish line. We crossed the finish line, hand in hand. It was a really fun moment.

We went to our tents, put on dry clothes and prepped the maps for the next day.

DAY 3: The next day started on the water. 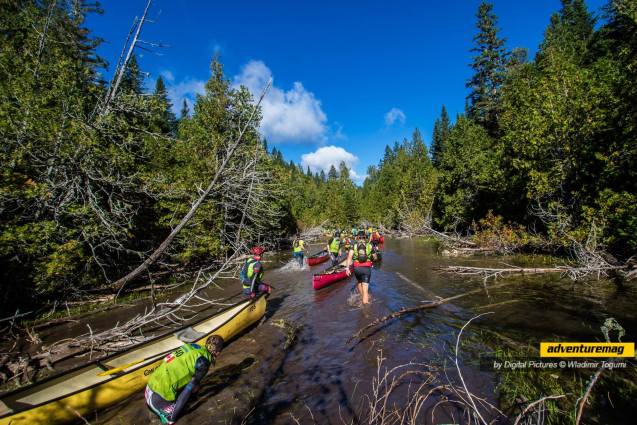 We all canoed to a woodsy area where we portaged a distance and then for a number of hours, we canoed over white water. I was so fortunate to have Brad in the back of the boat as paddling is his strongest discipline. I have never ridden a stretch of white water that long and it was exhilarating. 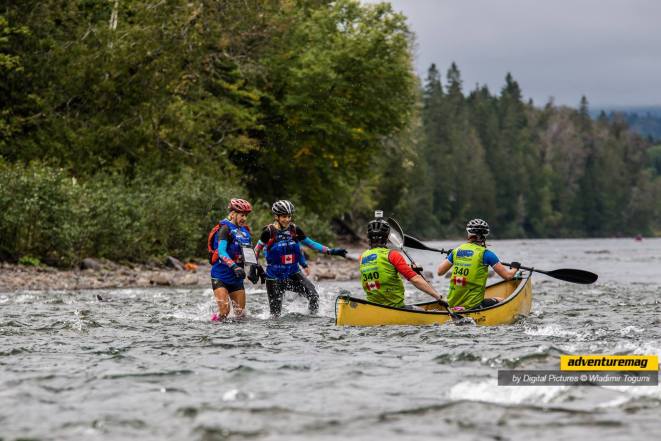 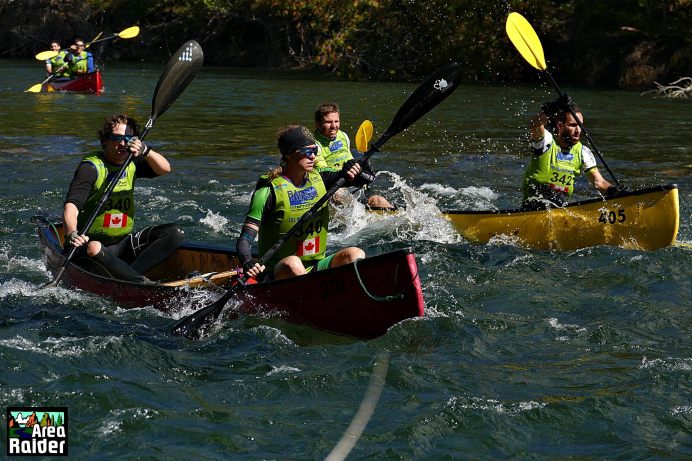 We hopped out of the water and did a mountain biking leg with a lot of fast, flat roads, ending at a transition where we headed out on a trek. We climbed one of the steepest inclines I have gone up in my entire life and it was this day, that I started noticing a twinge in my right Achilles. I had been hopping over rocks and bushwacking at high speeds so I was not surprised and I communicated this with Brad. I adjusted my stride and he put his hand on my back pack to help boost me up the incline to put less stress on my Achilles. 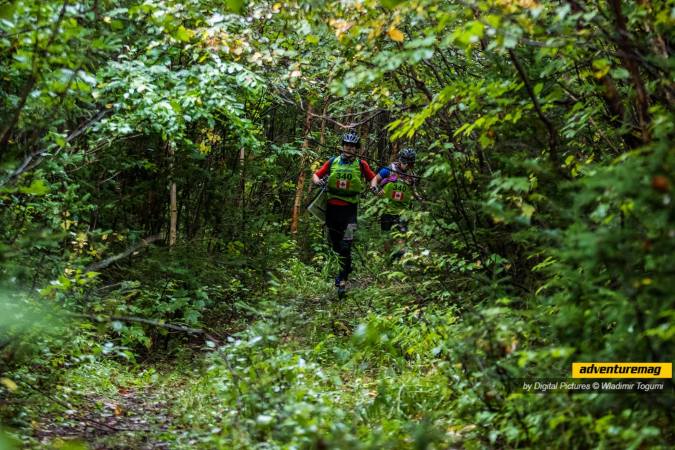 We reached the top and I snagged a checkpoint in the top of windmill. We hopped on the bikes and headed on a hilly cycle to the next transition. We overshot our trail back by a couple KM because it was marked as private property and ended up riding all the way to the bottom of a huge hill. Thankfully, we caught it early and although we had a HUGE hill to scale, it wasn’t that far off. We made the transition and headed to the next leg which featured some fun coastering. This was one of my favourite parts of the entire race – the coast was stunning.

We ended up at a small village where we grabbed a check point at the end of a wharf, snagged the next one in a small bar and grabbed our bikes. The last bike leg was hard for me. We were riding on train tracks and it was snapping my neck and I was not necessarily a happy camper. Thankfully, it was over quickly and we dropped our bikes and finished the day by running 400 m out in the water to an island to grab a final checkpoint. 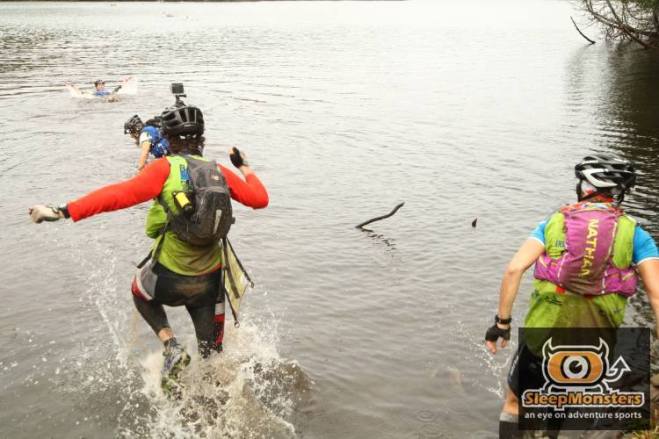 Honestly, with tired legs and inexperience with moving across rocks in water, I struggled with this but I pushed as hard as I could and we finished the day in first place in our category, which was more than I thought possible the proceeding days.

We prepped the maps and headed to our tents for an early morning.

DAY FOUR: We started on the water again and paddled about 10 KM to a house on the beach which housed our first check point of the day and where I ate the best chocolate caramel croissant I have ever tasted. So much so, it caused me to stop paddling to enjoy. 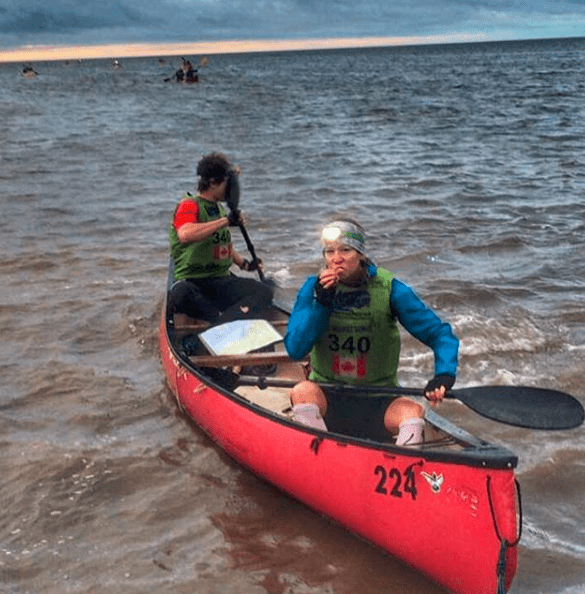 We reached the shore and grabbed our bikes. 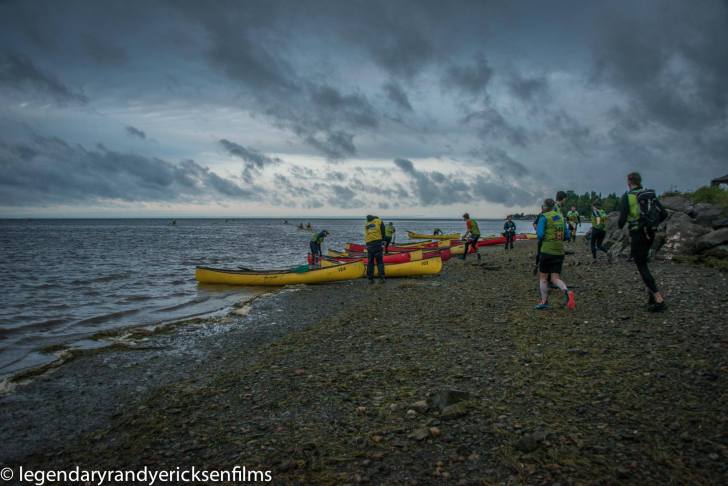 I was TERRIFIED for this day because it was pouring rain and we were to do a big bike leg which featured wet, technical, single track. Nothing terrifies me more and Brad can attest that I was dreading it all day. Thankfully, the first leg was uneventful and we dropped our bikes to hike up Mount St. Joseph. This was another HUGE climb, but thankfully, my Achilles seemed to be holding up. We were watching the time with concern – we were cutting it close to our 12 PM cut off for our bike transition. We had bunched up with a few other teams and we had a fantastic run along the mountain ridge line with the teams. We found all the check points and there was an aggressive downhill that had me running in zigzags in an attempt to minimise the pounding on my tired legs. We made the cut off, grabbed our bikes and headed into the most terrifying part of the entire race for me. 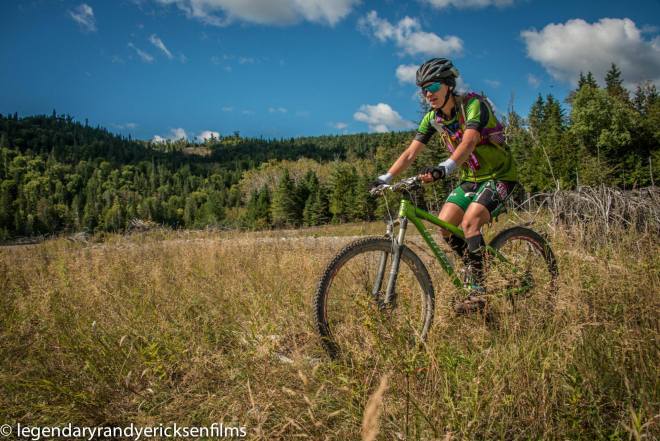 Before the descent, we needed to ascend the same mountain we had just ran down. It was 2 KM of straight UP. 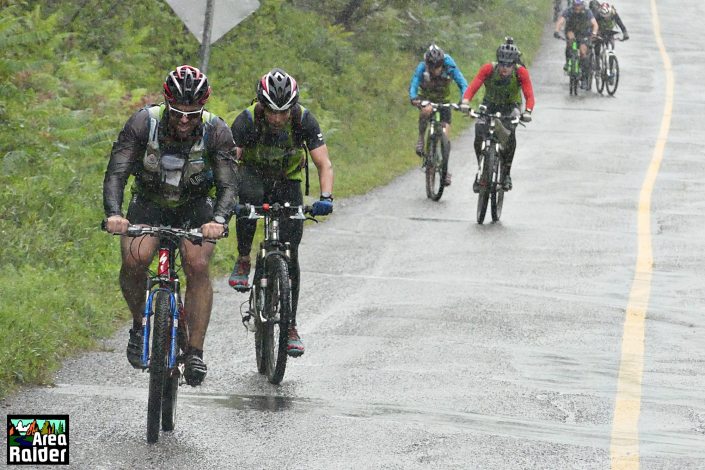 Truthfully, I would have rather gone up double the distance, than do a fast, technical descent. There were areas of the course that the race had placed signs with DANGER marked with a skull and cross bones. I diligently got off my bike and ran these sections, looking at the drop offs to my side. After about 45 minutes, we were off the mountain and we grabbed a few more check points before reaching the bike drop and running into the finish line in first place coed! 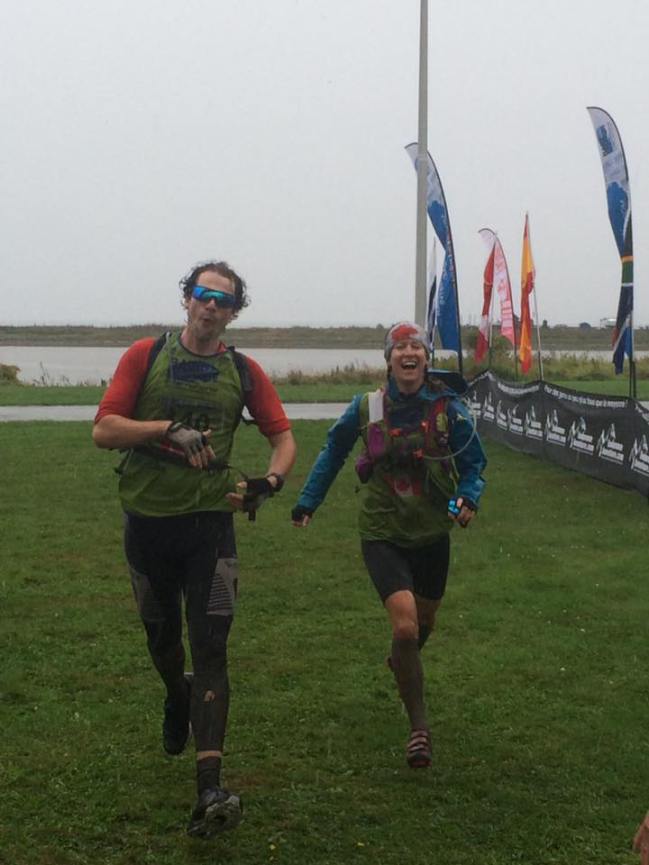 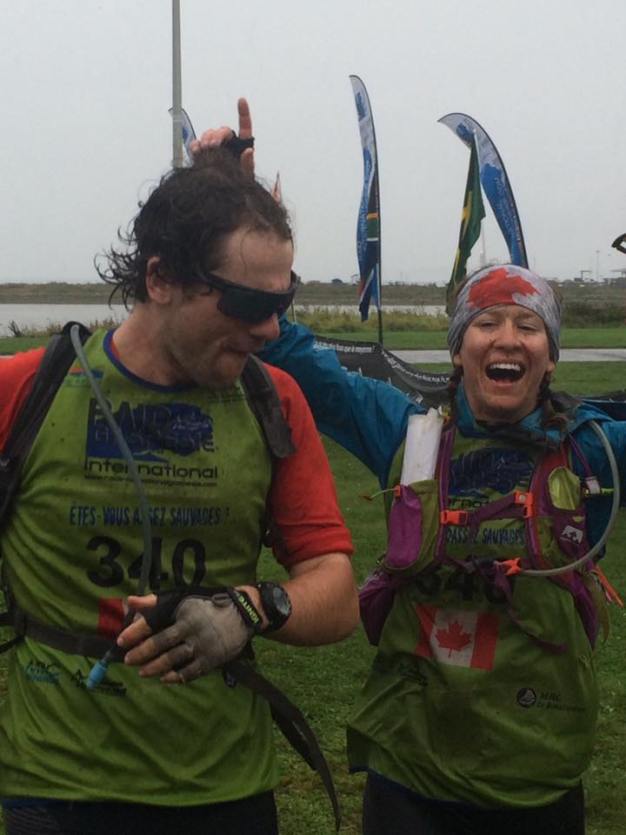 I was so proud of this race. I truly felt like I left everything I had out there and put a lot of my new skills to use. I am excited that I am able to race competitively in adventure racing at an international level and I look forward to building on that next year. 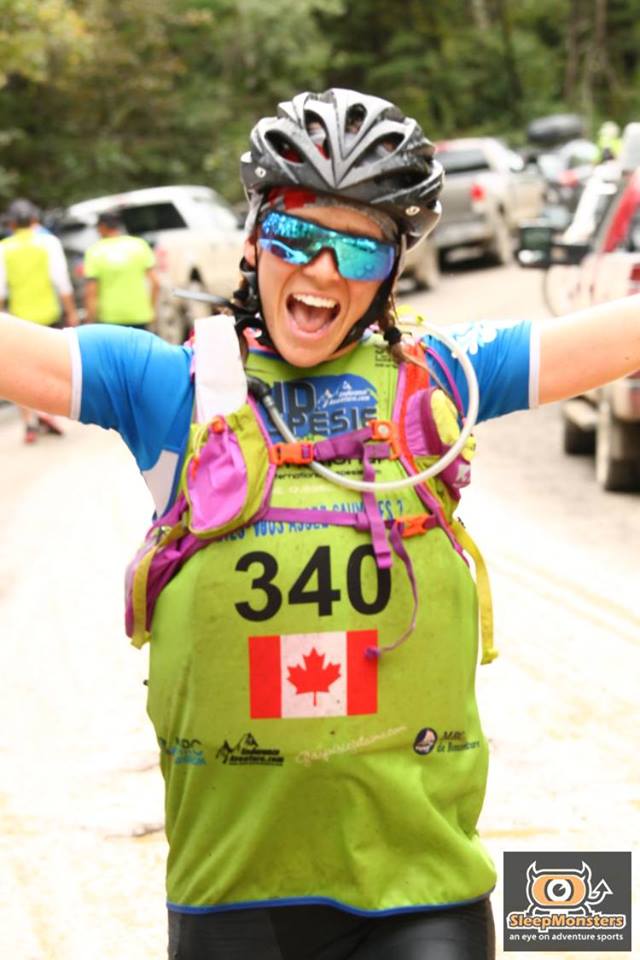 Lifejacket under racing singlet is a great look, no?

As a special note, we could NOT have done this without our crew member, Wayne Jennings, who prepared our meals, set up our transitions and tent, mapped out daily logistics and kept us organized. A good team is only successful with a good crew. 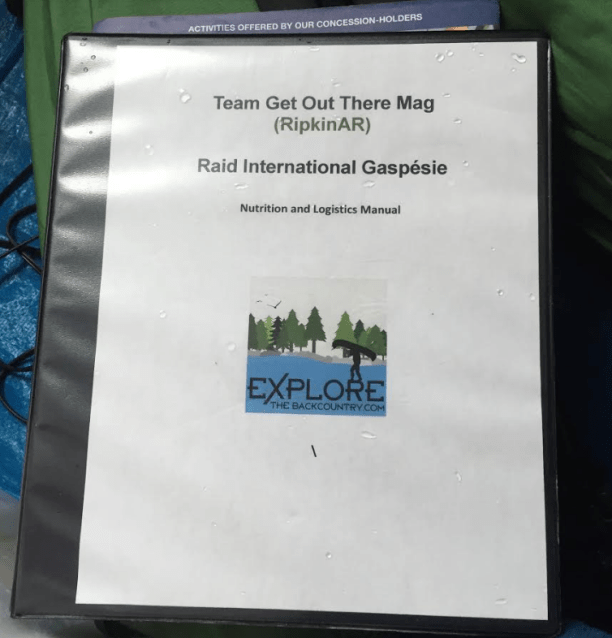 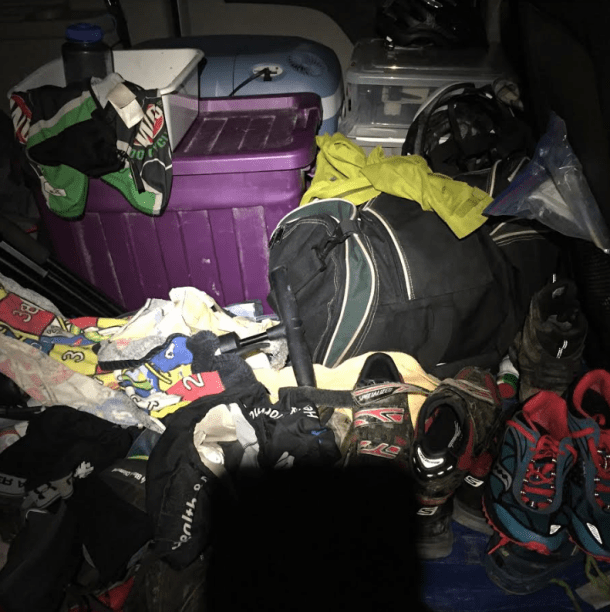 What our vehicle looked like by the end of the race..

I HIGHLY recommend this race. 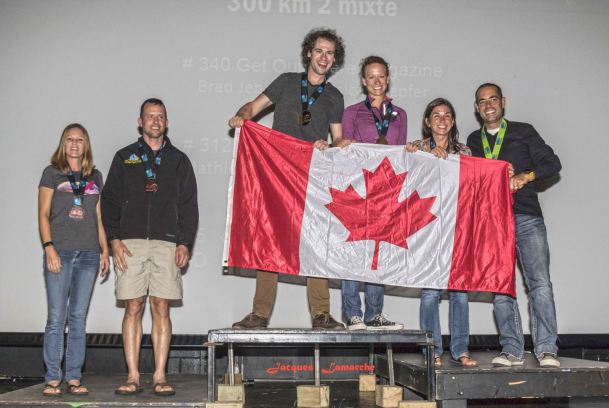 I’m not going to lie – it felt dang good to stand on that podium.

After all this, the best way to describe it is to show you:

So what’s next? I took a solid week of recovery. Like, I ran 5 KM this week, did a strength workout and some hot yoga but that is IT. My achilles is back to normal, but I decided to air on the side of caution. Next weekend, the gang and I are headed to Adirondacks, NY for the Ragnar Ultra Relay and I want to be sure to be able to pull my weight!