It is no secret to anyone who has been following along that I have shifted my racing focus to multi-sport for 2017 and I am really loving the training and lowered impact from increased cycling and swimming. I love the challenge of learning new sports and honing new skills, but sometimes it feels great to be in my element and doing something I am much more comfortable doing. For this reason, before launching headfirst into triathlon racing season, I had decided with my coach that we were going to tackle a spring half marathon to test my fitness.

I chose the Mississauga half marathon because it was local, fast and I had only heard good things about it (and the net downhill). I was hoping for a PR but a lot of my ironman training necessitates training in the aerobic zone so I really haven’t had a focus on speed training. I also did not have a taper as the week before the race week, I had a 19 hour training week, followed by easing up on intensity for race week which was as close of a taper as I could afford in the build for the ironman. All of this was combined with a hugely stressful week at work but I decided that these were all just excuses. I went out with the attitude that I would simply do the best I could on the day, no matter what. I always set a series of descending goals for each race so that no matter what happens, I am successful and can mentally control a race that doesn’t quite go as planned.

The A goal I set for myself (which I always disclose only to my coach and few others) was to run a 1:26:20. No idea where that number came from, it was just something I decided on.

My C goal was just to have fun and to run smartly and bravely. By that, I mean that even if the paces weren’t where I would want, that I would keep pushing, stay positive and move on.

I picked up my race kit on Friday night which left Saturday wide open for me to relax. It had been a crazy week, like I had said, so it was just lovely to sit on the couch, drink water, eat carbs and binge watch Girl Boss in its entirety. It was exactly the relaxing pre-race day I needed and that evening, Mark and I headed down to cheer on the 5 KM and 10 KM runners who battled some serious wind for some solid efforts. 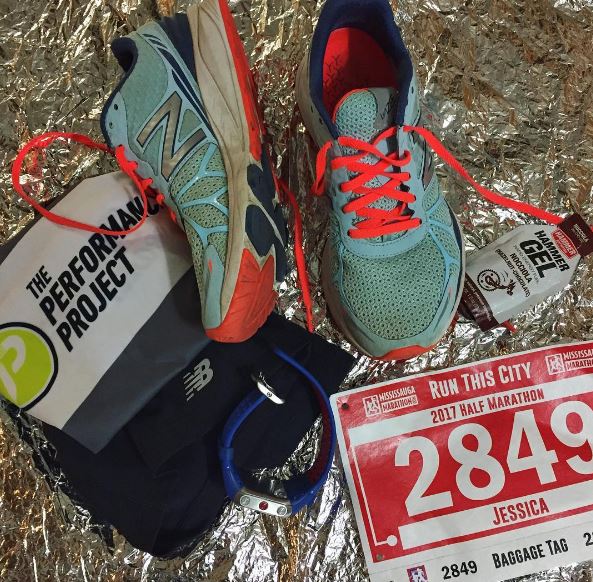 The race day was looking pretty cool but I chose to wear a singlet and shorts with arm warmers to help with the cold. I was hoping if nothing else, that the cold weather would get me to the finish line faster so I could be warm. I ran in my New Balance Vazees which may not be the traditional racing shoe but I love these, have been training in them frequently and my focus was swift recovery because I knew I needed to hop right back into training.

The morning of the race, we parked at the finish line and caught a shuttle to the start line where there was hot coffee, a warm place to wait and plenty of portapotties. This was an extremely smooth and stress-free race morning and at no point did I feel like I uncomfortable or rushed. It was so well organised and the perfect way to start a race to keep nerves at bay.

Mark and I did a quick warm up with 15 minutes to go and headed to the start line. I found a place a bit behind the start line and waited for the countdown. I have broken out the race the way I separated it in my head while I was racing.

KM 1 – 5 – The course is pretty downhill for the first 5 KM so I knew it was important to hold back and not burn my quads too much in the first bit. We were also fairly exposed to wind so I did my best to tuck in behind groups where ever I could and keep my pace from dipping below a pace that my coach and I had pre-determined. I tend to go out too fast and my focus was feeling slow and steady at the start. I reserved energy and focused on making it feel easy.

KM 5 -11 – In this section is where the work started. There were a few places to work such as the slight climb out of the UoT loop and there is really the only hill on the course at KM 11 but if you don’t know it is there, it can surprise you. I focused on keeping my pace on point and made sure to take the hills easy.

KM 11 – 16 – It was here that my race was allowed to begin. I am a watch watcher and I was instructed by my coach not look at my pace once I hit the downhill stretch and just go at a hard, sustainable pace. I found myself in an in-between section here and really didn’t have many people to run with. I did have some racers as targets in the distance and focused on shortening the time between us. I was feeling decent but it didn’t feel amazing at this point.

KM 17-21.1 – It was here that I started hurting. The final bit of the race is a bit zig zaggy and I started losing a bit of time because I lost power on the turns and to be honest, I just wanted to be done. At 3 KM, I did some deep soul searching and wondered how I would finish. I just focused on the pavement in front of me and repeated the fact that I practised hurting for long periods of time in training and I could do it now. I ignored my watch and just did the best I could. In the final 500 m to go, someone yelled at a runner ahead of me to smile. It was an awesome reminder and I painted a grotesque pain smile on my face and pushed hard to the end. I saw the clock seconds melting towards the next minute mark and truly processed that it was 1:26:5X and was content.

Mark was waiting for me at the finish line and was so excited about my time. I was extremely confused until he got through to me that it was 1:25:52. I had done better than I expected. I am obscene at math so when I saw the KM markings, I tried to approximate finish time and had added a good 3 minutes on to what I thought I would cross at. All that to say, I was pleased. 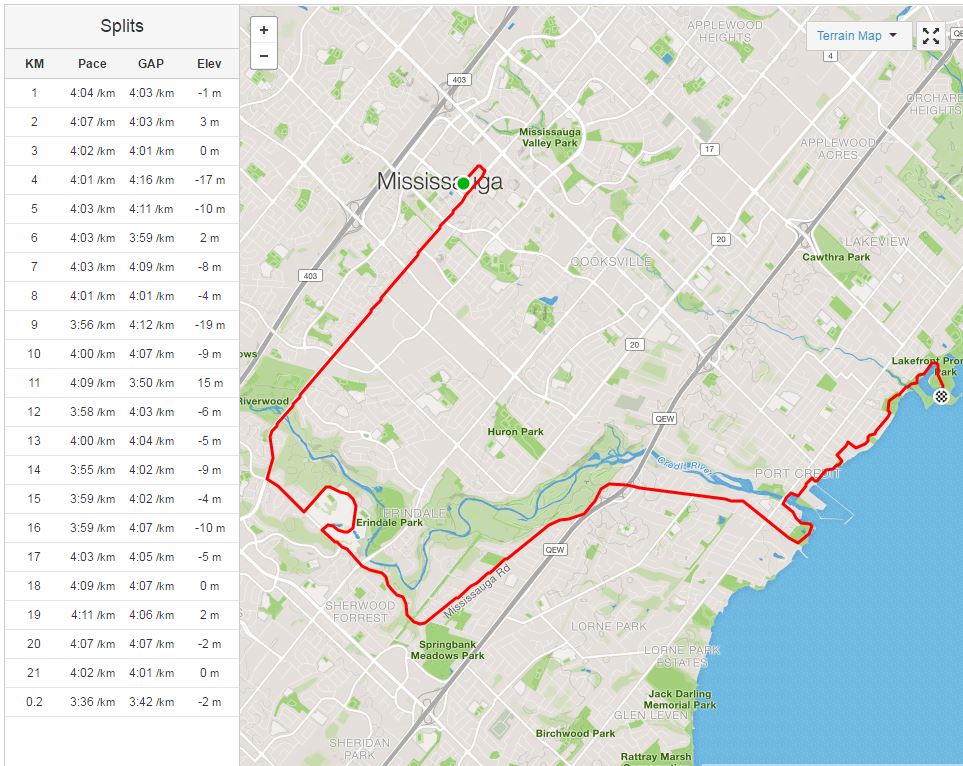 Through the race, there was a lot of support on course in terms of water stations and I took a sip of Gatorade at each one and that was the extent of my fuel. I know this can be improved upon.

I had an awesome experience at the Mississauga Half and will absolutely be racing it again. This was a good fitness test for me going into multisport season and I am looking forward to continuing to build fitness.

There are a few changes to my 2017 race schedule – I will no longer be doing Syracuse 70.3 and will be doing Welland Long course instead due to scheduling and have determined my fall adventure race this week. Brad and I qualified for the USARA National Championships at the Florida 72 hour so we will be competing, alongside another team member in PA this September. It is going to be a great year and I am looking forward to many more awesome races.