Ok – how seriously awesome are summer weekends? I just got back from Muskoka where I spent the entire weekend training, living outdoors and cheering on some awesome athletes at the Muskoka 70.3. 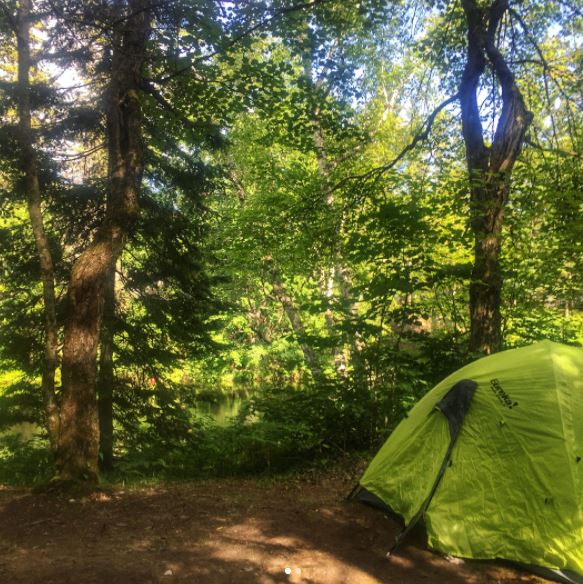 Sadly, summer tends to fly by so I figured it was high time to chat about my last race before I head into my next big one: the Ironman.

At the very end of June, I headed out to Alberta to run the Kananaskis 100 Mile relay, a gorgeous course that begins in Longview, takes you towards the Rocky Mountains and ends at Nakiska for a big post-race party.

How did I end up on a team full of Albertian gazelles? Well, at the Mississauga half marathon in May, there was this speedy girl just ahead of me the entire race. I kept her in sight and kept waiting for her to fade and she never did. When I crossed the finish line, I went up to her, introduced myself, and thanked her for being such an awesome “carrot” to chase. We both walked away with shiny new PBS and an awesome new friendship.

A couple weeks later, she asked me to join her team for the K100 to help cover a girl who was out due to injury. So that is the back story on how I ended up in Calgary eating pasta before race night in Dawn Ladd’s kitchen and I am SO GLAD it happened.

Our team was Critical Speed, sponsored by  Calvin Zaryski, an extremely decorated and talented coach in the Alberta area. He was extremely helpful to the team and provided some on-course nutrition, support and post-race celebrations!

We began the day at 8 AM – the last wave of the day, but not before taking a team photo in our race singlets. 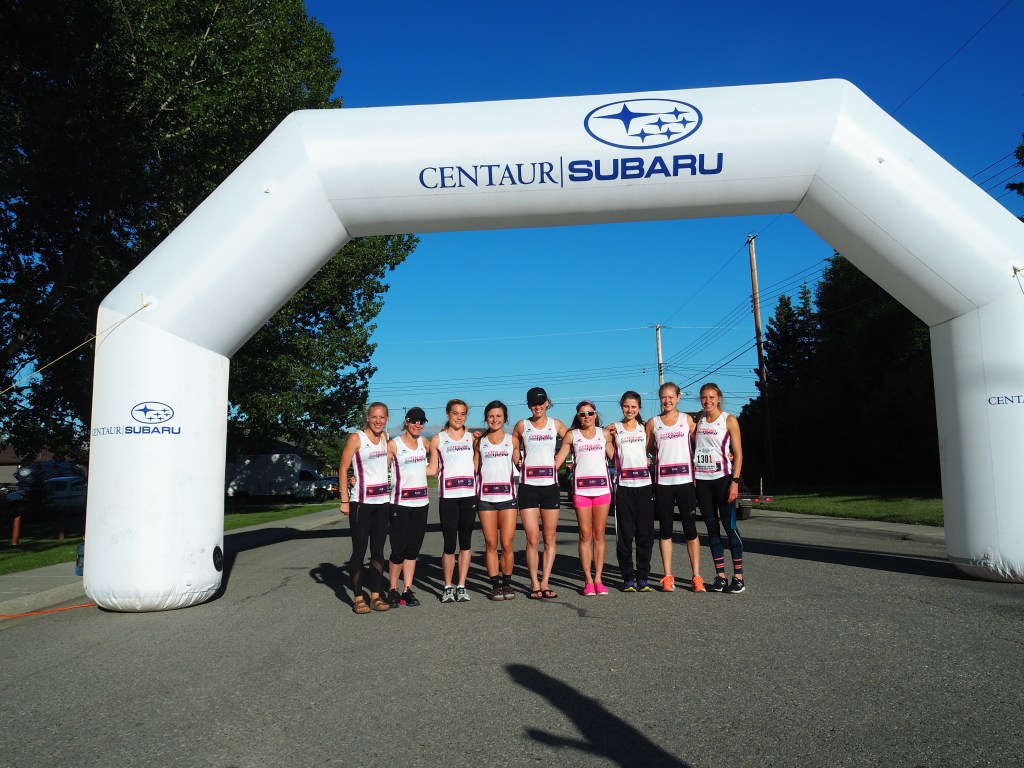 Our first runner was Melissa Jones who ran so quickly and beautifully that we had a spectator come up to us and ask who ran the leg and informed us that he “could watch her run all day.” Us too, sir. 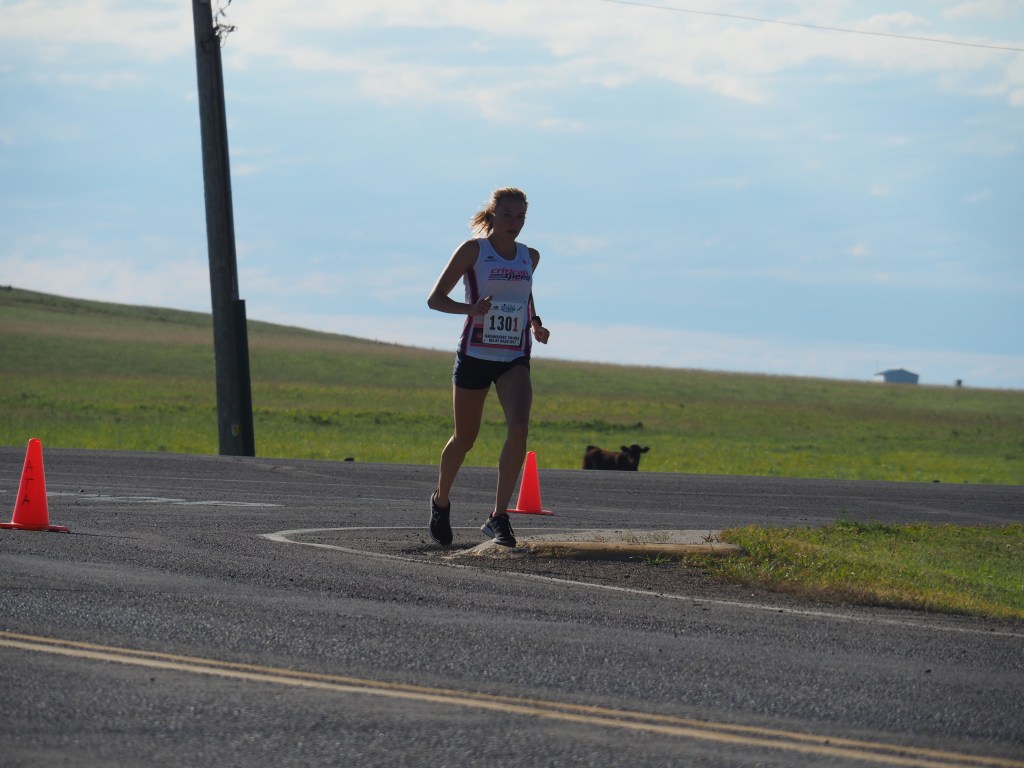 Next up was Grace Kary who held our lead and pushed the pace with a fierce leg. 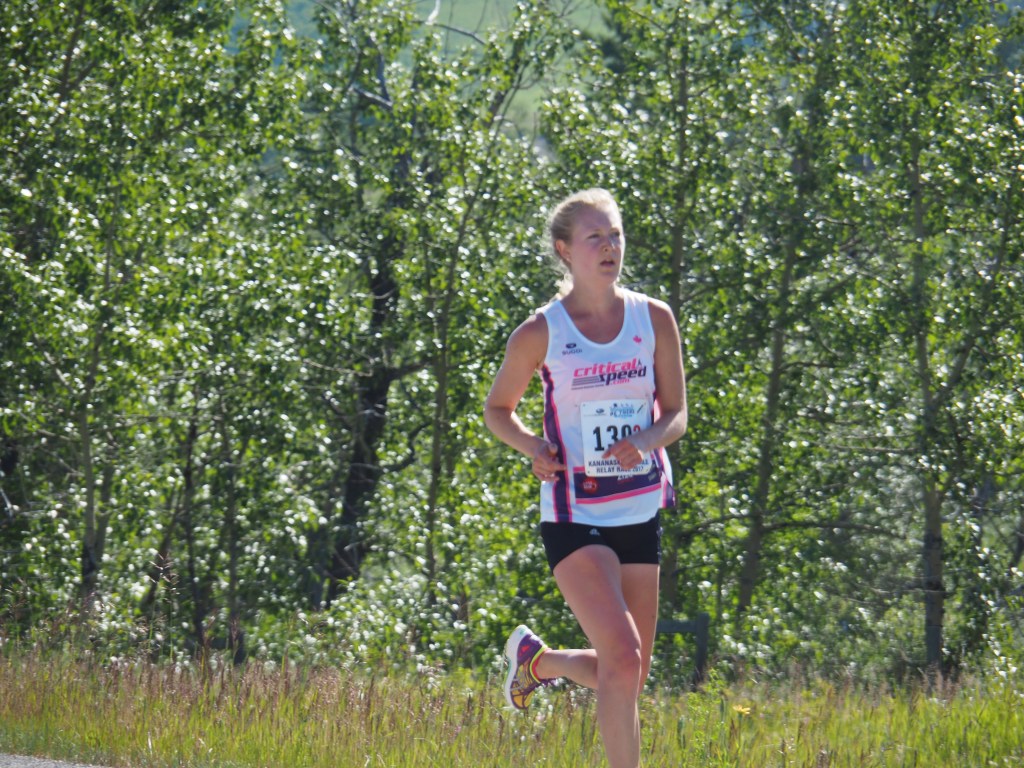 Bridget Pyke was our next leg and we had a male runner come up to us later in the race and just shake his head and simply say “that girl on your team on leg 3 destroyed me.” Competitors and all the hills, complete with a ponytail swish. 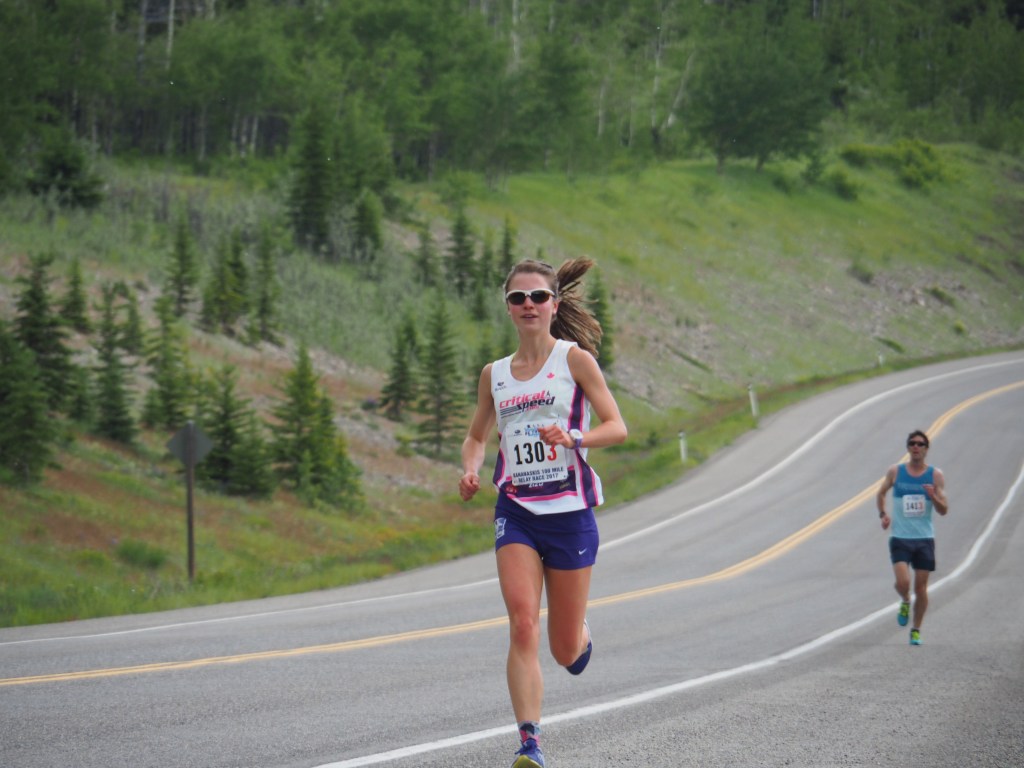 Throughout the day, we would leap frog with two different vehicles which traded jobs between checking in the next runner for the relay and on-course cheering (complete with an incredible playlist).

The fourth runner was Adriana Wild, one of Cal’s athletes. She ran an incredible leg but unfortunately, I wasn’t able to see much because my leg was next and I needed to go get checked in and warmed up. 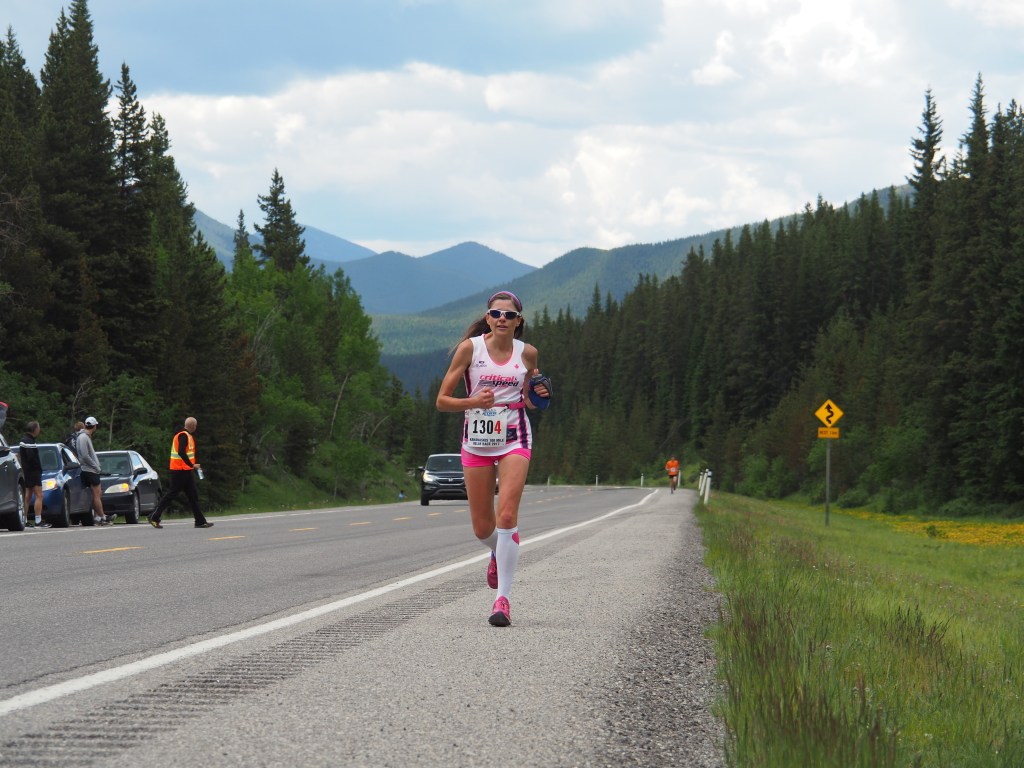 I had Leg 5. People from the area would inquire about my leg and when I told them I was leg 5, they would ask if I knew what I was getting into? 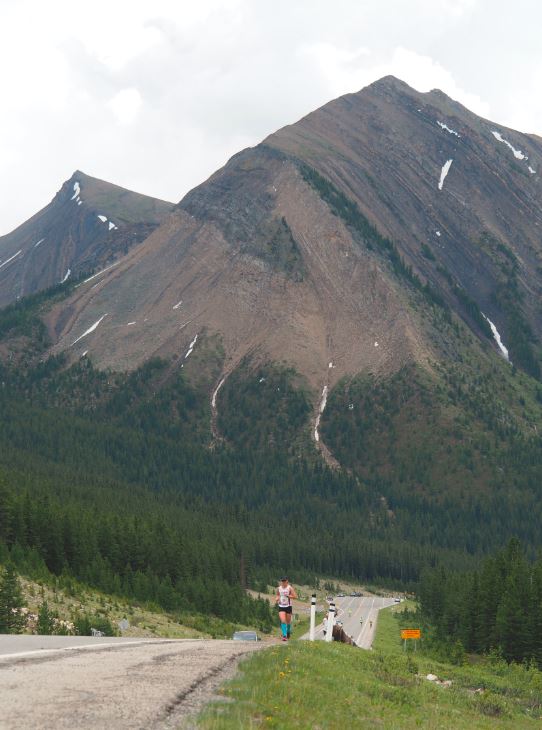 This. I was getting into this.

This was the elevation profile. Now, I was proud I finished it, but it certainly wasn’t a triumphant performance by any means. There were many factors playing into it, but I don’t want to make excuses,  let’s just say, I have unfinished business with this leg.

Next up was Jordanna Cote, a cross country speed demon from Red Deer. She had the mirror image of my run and ran downhill so fast that I think she may actually have been flying. 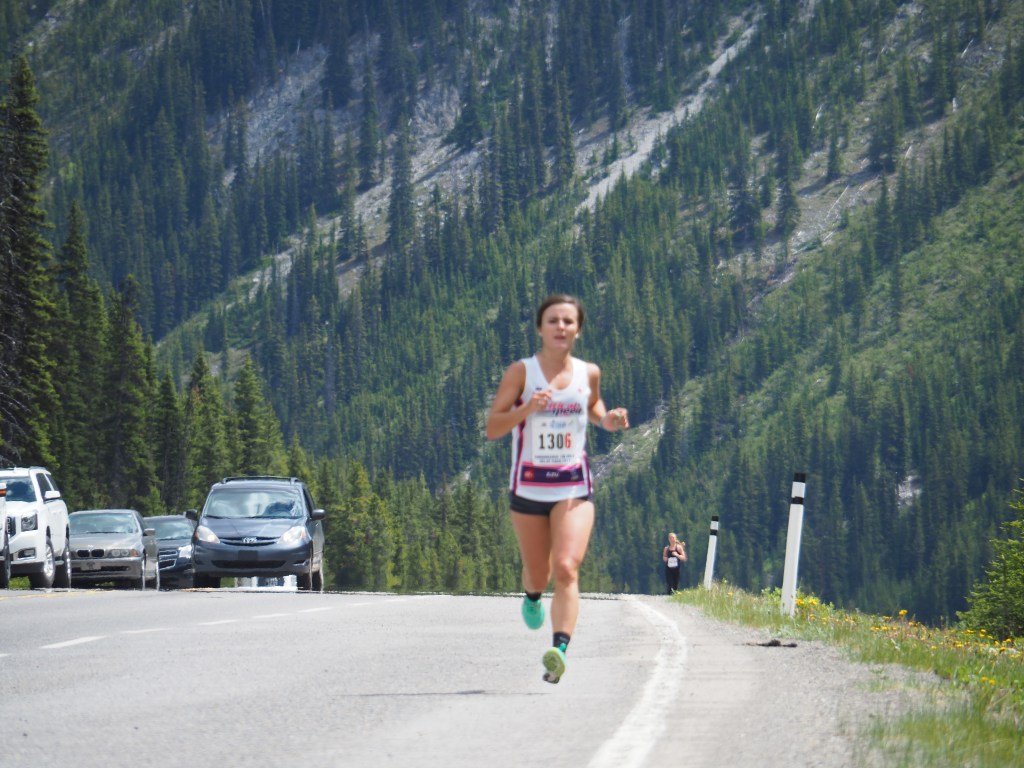 She tagged off to Gloria Kanuka, who unfortunately, I didn’t get to see much of because Dawn and I were hurrying to the trade off point to get Dawn signed in and warmed up for her leg. 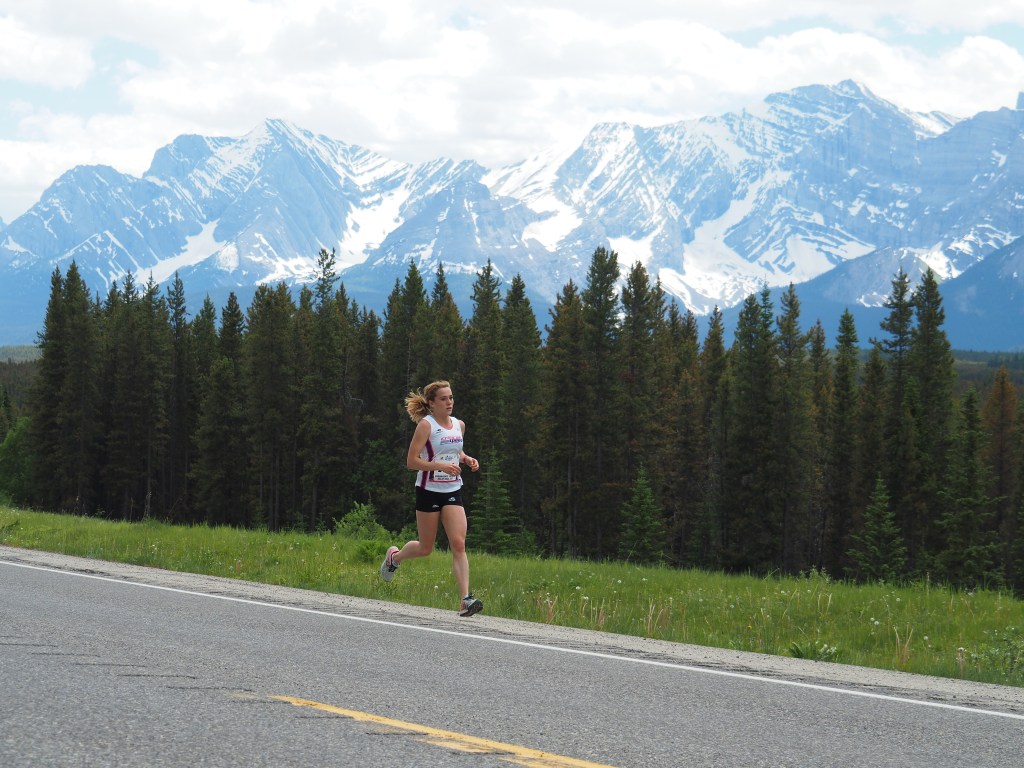 Dawn was ready to go when Gloria tagged off and she had requested to have Gatorade every 3 KM. Jordanna and I alternated between blasting the music and cheering and handing off nutrition. Dawn crushed it. 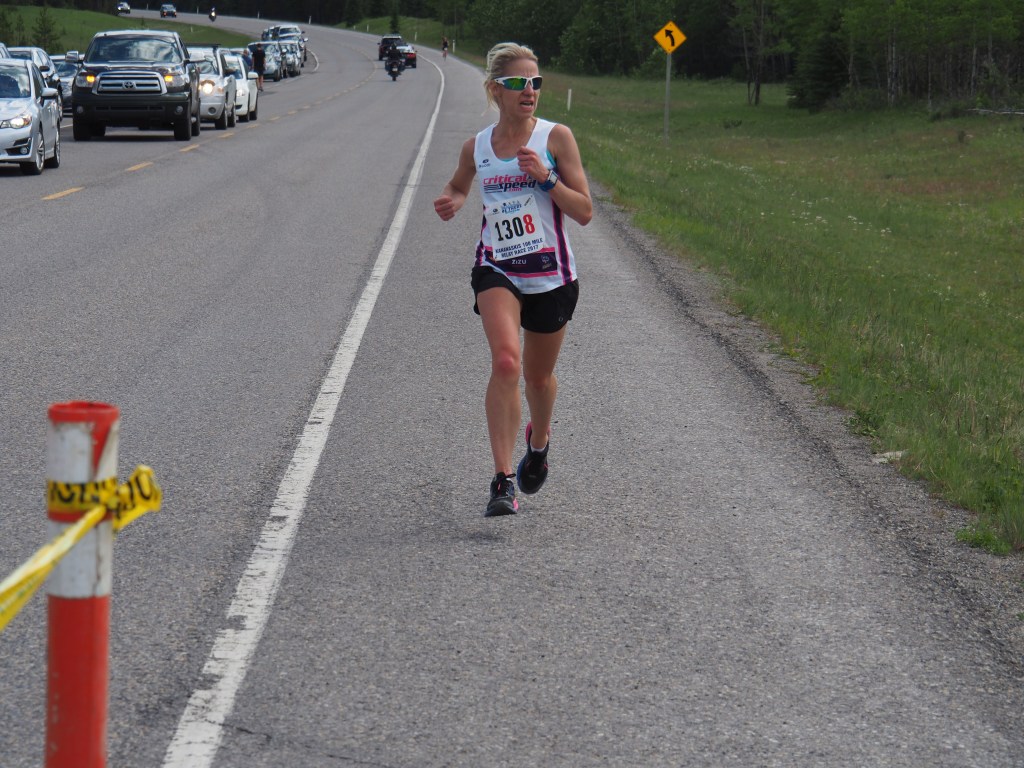 The next leg was Jess Kaiser, the woman behind the camera all day. For all the support she gave all day, we were not able to properly return it as she headed to an 11 KM leg on trails that were inaccessible by vehicle. So while she was taking one for the team, we were already at the finish line tucking into burgers. 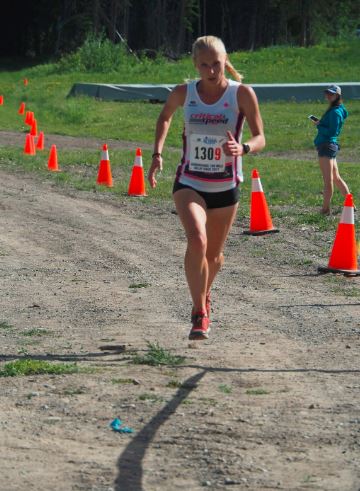 I should add that the competition for this race in the female category was FIERCE. I can honestly say I was blow away by the caliber of athlete both on our team and the girls we were racing against. At this point, we were minutes behind another team and were biting our nails.

Our final runner was the small, but fierce Shari B. She had 16 KM and the expectations of the entire team resting on her shoulders. 2 minutes before she came in, the speedy runner from the other team rolled in. We went over to congratulate them and they said that there was a forced start on an earlier leg which means that they needed to start before their other runner was in. We may still have a shot.

We communicated this to Shari who blazed into the finish line and we all proceeded to wait for an hour to find out the final results. We found out at the awards ceremony that we were the winners by less than 3 minutes. Over 100 miles, that is incredible. Hats off to the awesome girls we were competing against – I thrive on strong competition.

We received an engraved trophy, a free invitation to race again next year and some awesome race medals. 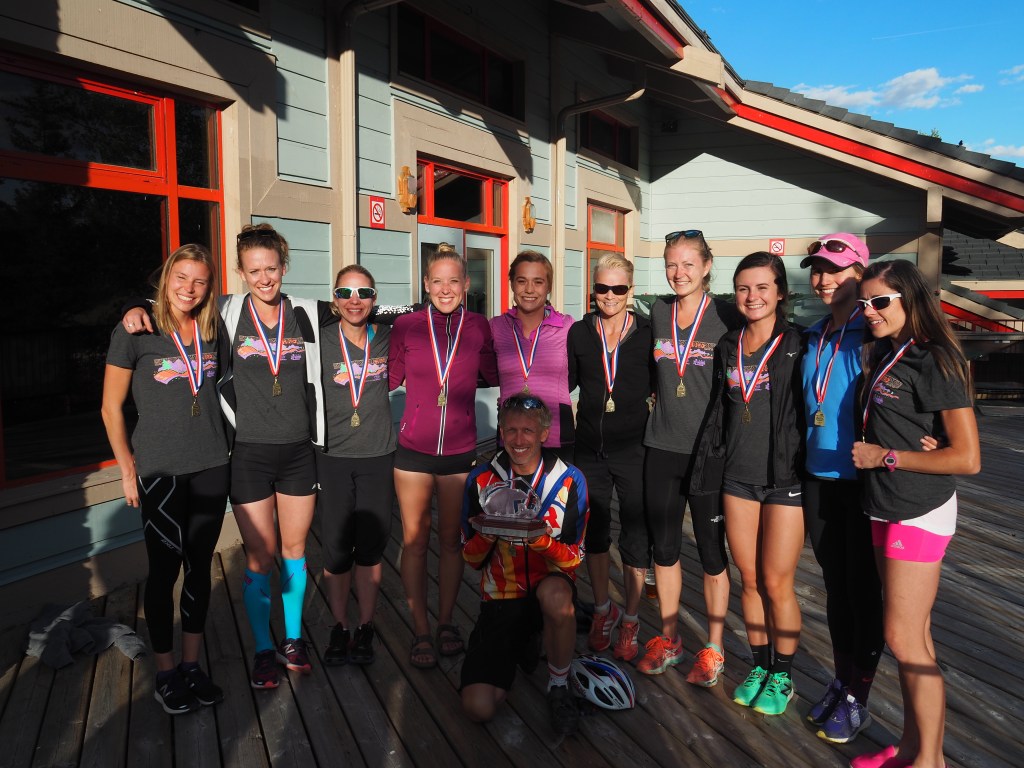 This race was incredible and I cannot wait to do it again. No matter how deep in the pain cave you go, being surrounded by such beautiful scenery, awesome athletes and a well organised event makes it worthwhile. Special thanks to Critical Speed and Dawn Ladds for what is one of the highlights of my summer.