Today in French Conversation class, we were talking about our most memorable Halloween costume. I knew exactly which story I was telling when the topic was chosen.

You see, my most memorable Halloween was also my most embarrassing Halloween. I have a knack for finding myself in the most socially unacceptable situations and gliding as awkwardly through them as humanly possible.

It was a Friday, October 31 of my first year of University. I was planning on going to Guelph for a Halloween food drive with one of my new friends I made in orientation week. (So with a person I barely knew, to meet people I didn’t know, and stay in a place I wasn’t familiar with). We were going to be walking around outside collecting food and it was going to be cold, so I thought long and hard for the right costume. I wanted it to be cute, functional and warm. At last I had it!

You know those ugly sock monkey hats? These ones? 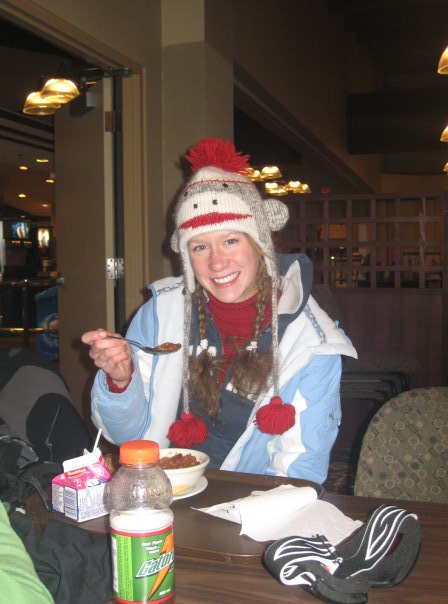 Well, I own one. I was gazing around my room and inspiration struck. “Hey! I have grey sweatpants. I have a grey hoodie. I have a small tail I can attach. I will go as a SOCK MONKEY! Creative, cute and warm.”

So I hauled my sock monkey costume to my friends apartment and  changed in her bathroom. She already had her coat on so I didn’t get to see her costume. She was a train conductor or something?

We grabbed lattes from Starbucks and headed for Guelph. I was mid-swallow when she delivered the punch that turned my Halloween around. “So, they canceled the food drive. We are going to a Halloween house party downtown instead. My friend said we can stay the night at her house.” I scalded my mouth and tried to smooth my composure.

“No problem! Awesome!!….” My voice sounded a bit thready.

We dropped our things off at her friends house and took the bus downtown. Suddenly we stopped in front of the most trendy apartment I had ever seen. We climbed the stairs and it kept getting nicer. The door flung open and suddenly I was an oversized, comfy, grey sock monkey in the sea of mice and bunnies that appeared to have forgotten their costumes. I awkwardly edged to the corner of the room trying to become invisible but it was to no avail, I was the giant sock money that remembered it’s clothing.

It was a conversation starter and I decided it didn’t matter that I was way out of my comfort zone, I could DO this. I spent the rest of the night mingling with the mice and trying to rescue my hat from others who seemed to think it was the best thing ever.

To those of you who doubt it was really that bad, here is a photo with the evidence.

So that is how I ended up being a Sock Monkey at a posh apartment, surrounded by sexy mice and bunnies.