So I promised I would give you all a recap of the race. And as I sit down to write a report on how food determined the social roles in Renaissance England, suddenly I received an unsuppressable urge to tell everyone in the blogosphere how my race went.

So here we go.

I left you at the night before. I woke up at the crack of dawn, had coffee, devotions and grabbed my stuff. I listened to the Titanic soundtrack as I drove into the sunrise (I’m hardcore, I know…) to pick up my number one supporter and friend, Rebecca. She was ready and I stopped at Tim Hortons before arriving at the race site. On the way, the trees were a million colours and the sunrise was show stopping. I am giving lame, tame and plain descriptions of the morning because nothing can describe what we saw. I guess it is because I often am not up before the sun and sitting outside on most fall mornings. Upon seeing a rainbow on top of it all, Rebecca remarked “It’s a sign,…it’s going to be a perfect day.” (Side note: she retracted that statement as the day went on).

So, veering back on course after one of my infamous rabbit trails, we arrived at the expo and I began stretching, had a CLIF bar and another coffee for breakfast and went to the washroom a bajillion times before the start of the race. You can’t blame me when it looked like this 15 minutes before start time: 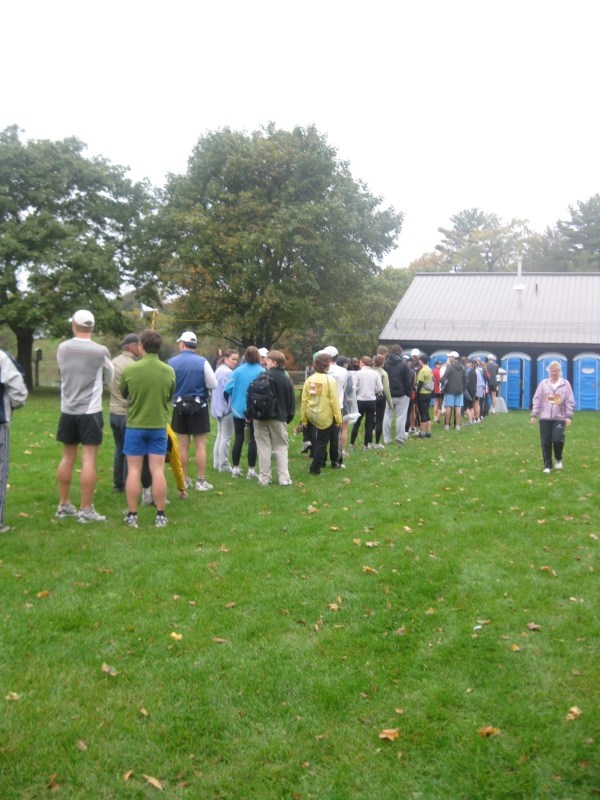 We attended opening ceremonies and snapped a few pictures when I still looked more fresh and alive then road kill. 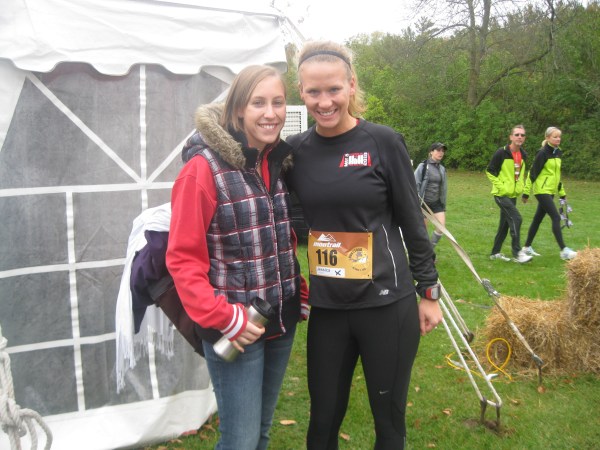 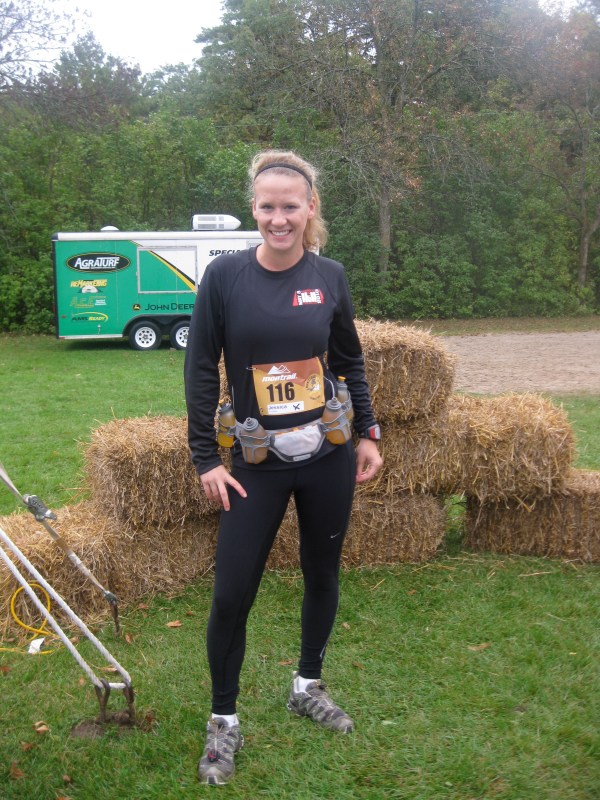 And then I gave Rebecca a big hug and galavanted off to the starting line. It is fun after a summer of training hard and doing a lot of races. Suddenly you have people to chat to at the starting line because they recognize you from training runs, races or running stores. I am an extremely social person so I was happy to chat away any nerves until they drum rolled us to a start. 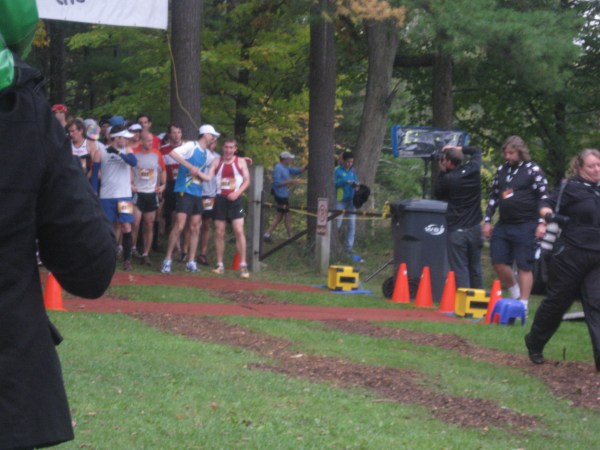 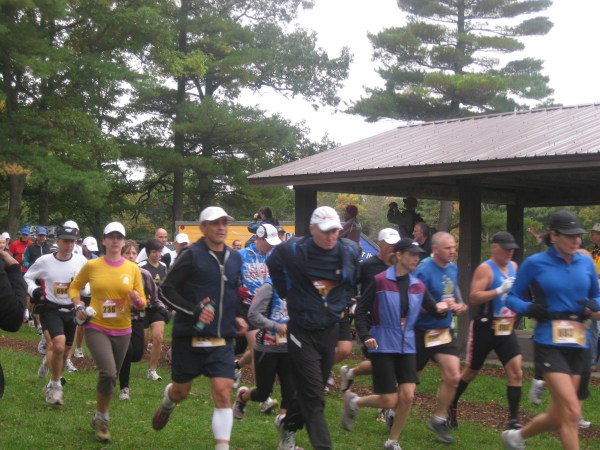 I am not going to lie. I was severely annoyed with the bottle neck effect of this race. There were SO MANY 25 km runners and I felt like this race catered to them, not us. We actually came to a standstill as 1000 plus runners tried to climb the first hill of the 192 I needed to run before the day was over. The atmosphere was jovial for the first 12.5 K loop. The second loop, it started raining and becoming that kind of cold that sets into your bones. I started feeling a bit fatigued around 18 KM; I was pleasantly surprised that I sailed along for this long. I was ready to shake the masses of people and run solo. Despite being a social person, I prefer running alone. I love the quiet rhythm you fall into and the room to think without interruption. As I was approaching the 25 K mark, people were chattering about being “done” and “getting to that nice hot catered meal”. Volunteers were saying “Almost done!” and when the ladies looked at me and began complaining about the distance I finally blurted out, “Well, you get to stop in 2 KM, I am only half done.” They were silenced. (Don’t worry, I was kind.)

I completed my second loop and pressed forward into the hardest loop emotionally and mentally. I stopped at the first rest station and chatted with the wife of one of my fellow runners who was volunteering. I said I would kill for a burger, she gave me some chocolate chip cookies. I was running low on stores and I had not had a full meal yet that day. I was so tired of sugar and the conditions became more and more treacherous. It had begun raining hard and it was the kind of cold that seeped into your bones. At this point, I was wondering how on earth I was going to do another lap and I think this was where I began reciting the “Yea, though I walk through the valley of the shadow of death…” passage out loud. I was knee deep in mud, the hills were slippery, I was tired and hungry. And then I hit 38 KM. Lap 4.

So I kept pressing on. I took my Roctane at this time and I assure you it works. But I was burning through everything I put in my mouth so it was effective for maybe 30 minutes, which in the grand scheme of things did not do very much. The volunteers and paramedics at this race were outstanding. They stood in the rain all day and tried to keep the food at rest stations dry. They cheered us on and encouraged us, even lied to us when it was exactly what we needed. (What? I WAS almost done!!! Only 15 more kilometers….)

It was the 4th lap where I did my damage. I could feel muscles tearing and tendons snapping but I forged on. It was not for me, it was for Jolene. I would cheer at every kilometer marker and I began praying aloud for Jolene. I cannot say enough how emotional this race was for me; it actually meant something to my family that I finished it. It was run for Jolene and if I didn’t finish a race that I dedicated to her…well, I just had to finish.

I teamed up with an Ironman competitor until I lost him at a rest station. We swapped stories of our families and races. When I fell behind him, I met up with a Marine and Army Officer. It was fascinating to hear their stories. I was able to speed up so I said goodbye and splashed through mini-ponds and wallowed through mud pits. I finally hit 49 K and went as fast as my trashed little legs could carry me. 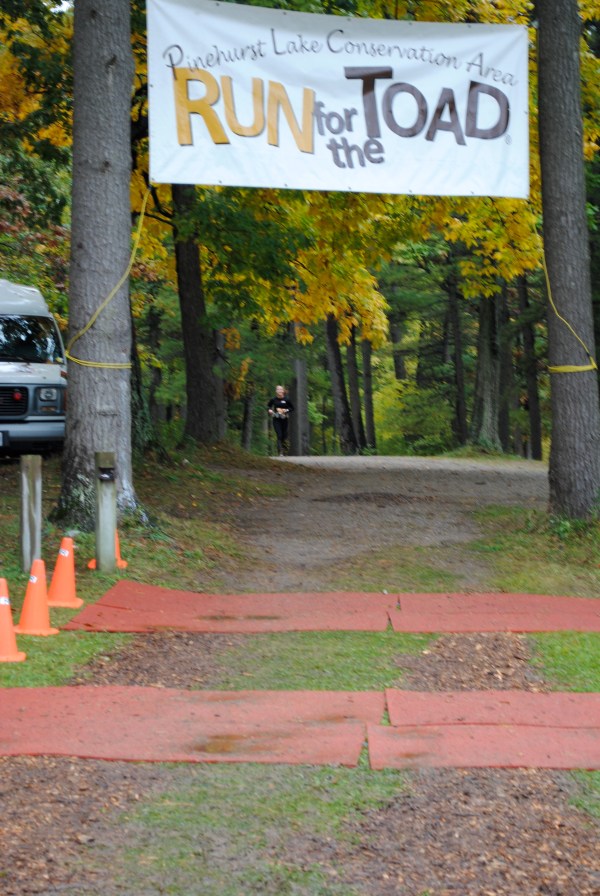 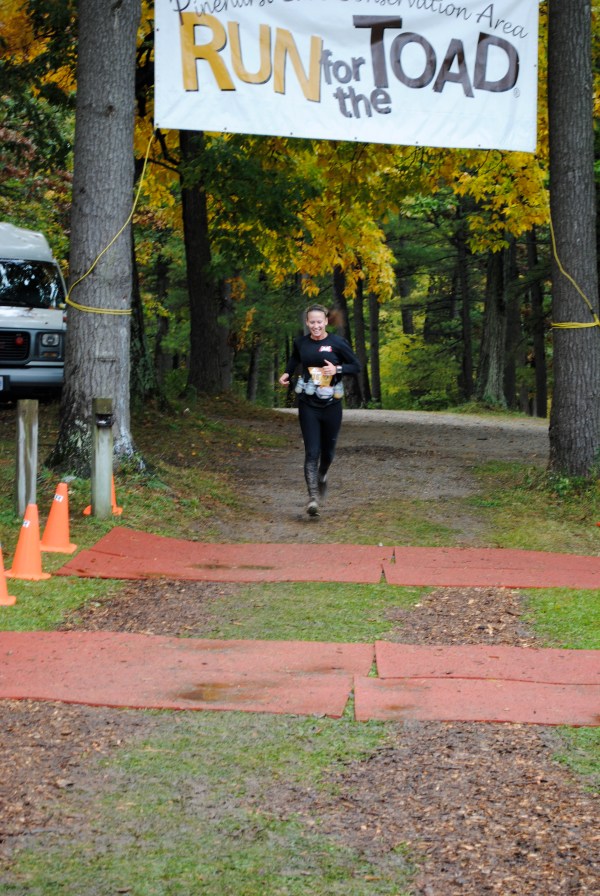 I saw my dad and sister waiting with Rebecca at the finish line. I screamed, “I did it! I’, DONE! I did it!” as I crossed the line.

I got my medal and some teary hugs. 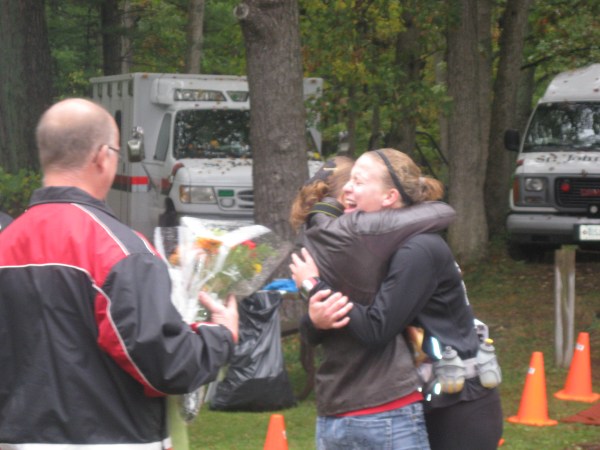 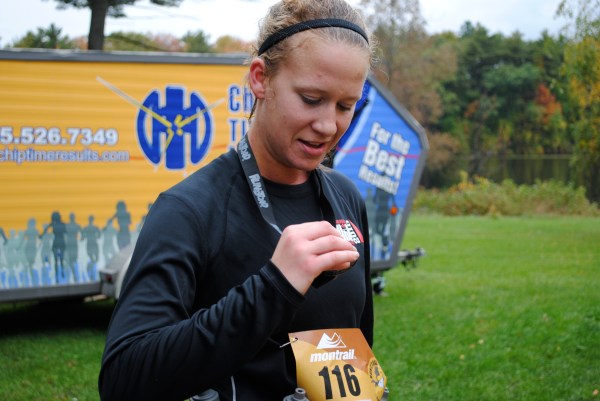 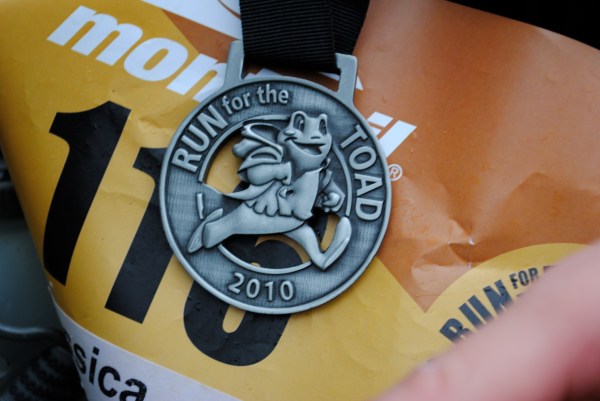 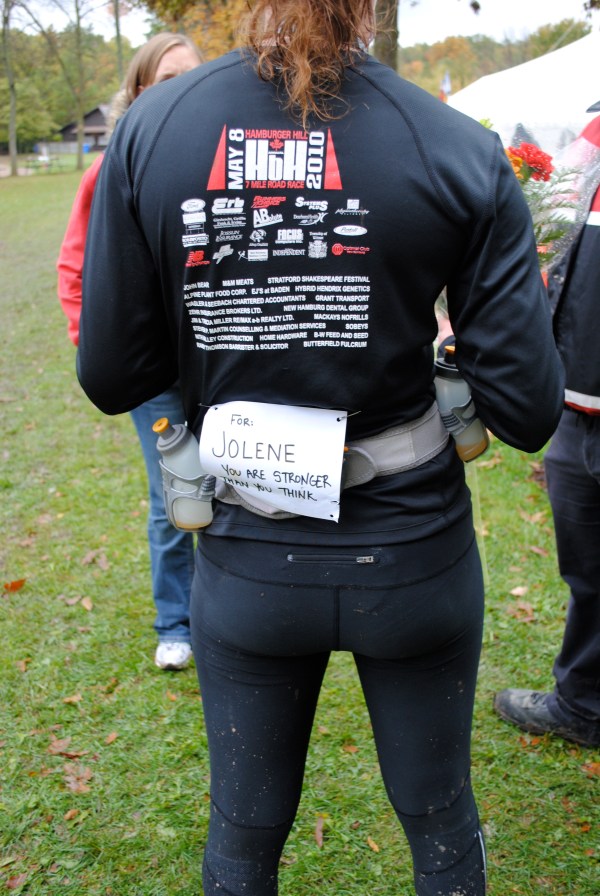 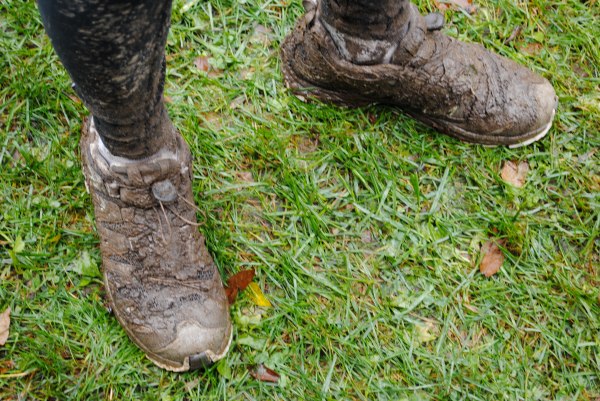 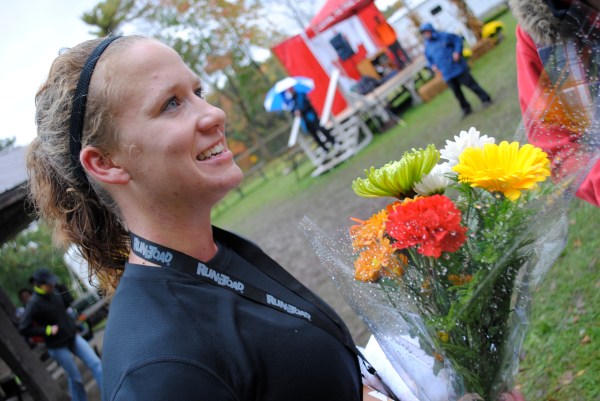 I gave big high fives all around when my Iron man, Marine and Army Officer friends crossed. It was amazing how a solo endurance race can become teamwork when conditions become like this. We all had run in a small little pack and told each other that we CANNOT quit. It was swapping stories, tips and making jokes that helped us go on. At one rest station, one little old man (who was running his second ultra-marathon that week) asked the paramedic if they were feeding us Diet Coke “because I wouldn’t want one with calories in it!”

Psh. After getting my knee checked out, I shivered my way through a plateful of food and headed home.

[I felt so celebrated. The next day, my mom threw a celebration party for me with some of my friends from church. Now I am hobbling around like an old woman. I went for a massage tonight and the woman told me my muscle damage is deep. I am going to take a month of rest before trying any heavy contact sports. For now, it is swimming and walking and stretching] 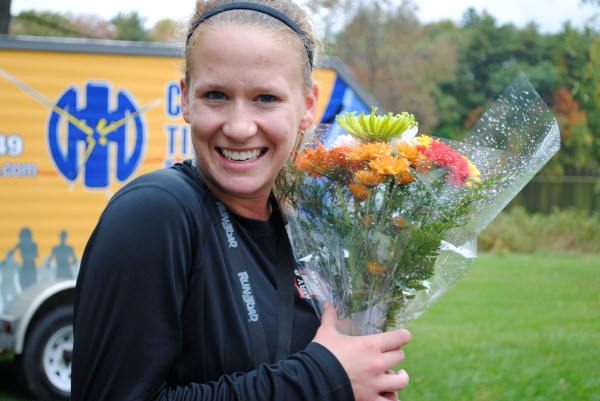