Introducing You To My New Car!

This weekend, I brought my baby home.

I had her name all picked out.

I went in on Saturday, signed the papers, and she was all mine.

I am, of course, talking about my new car. It’s not that it was a choice that I would have made if I didn’t have to, but I am so glad I did.

I want to introduce you all to Isabelle “The Fox” Kuepfer, my new little Prius C. 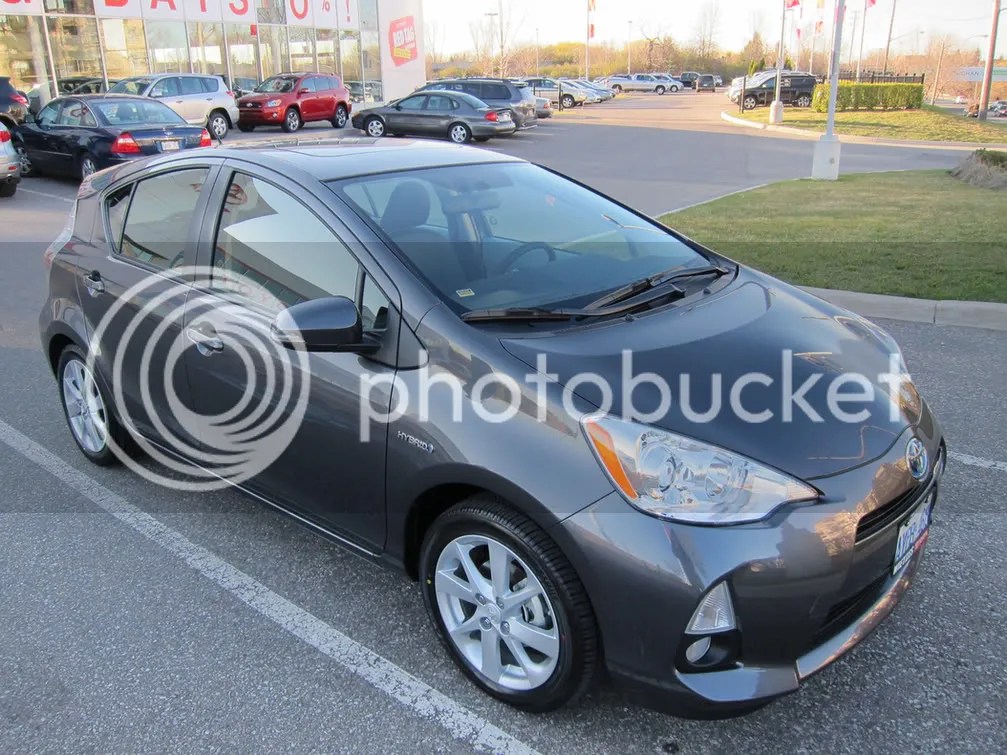 What is unique about a Prius? It is a hybrid vehicle, which means that it runs on two engines: a hybrid engine and a gas engine. It has the highest city milage of any car out there other than a fully electric car, because it runs mostly on the battery while I am driving in the city. It has a combined city/highway fuel consumption rating of 3.7 L/100 km.

Why did I want one? As a commuter, an athlete and an environmentalist, I put quite a few emissions into the atmosphere by driving to work every day, my races and road trips. A hyrbid vehicle produce 70% fewer emissions that a typical new conventional vehicle. It also looks awesome and has some amazingly fun features, making driving seem like a game! I also need to talk on the phone sometimes while driving, it has Bluetooth as well as “text to voice” which reads my text messages and allows me to respond verbally. It also has an amazing sound system.

What does it drive like? Like a dream. It is smooth, turns on a dime, accelerates wonderfully; the only eery thing is turning it on and not hearing a sound and realizing it is ready to drive!

One of the most fun bits of driving Isabelle is all the information that she gives. There is a small computer on her dash that reads out the following: (taken from the internet because I don’t want to take pictures and drive!)

This one is cool. It shows you when you are using the gas or hybrid engine and where the energy is flowing.

Also, when you break, it stores that kinetic energy in the battery and recharges it.

My favourite screen to drive with is an eco score. Being a competitive person, I eat it right up! It gives me a score out of 100 on how environmentally friendly my starting, stopping and cruising is!

This screen shows how much you save on gas compared to a conventional vehicle on each trip. Yesterday, I saved over $10 by driving to Guelph and back. I am not sure how it is long term, but so far Isabelle is managing over 1000 km a tank. That is something worth cheering for!

Isn’t it poor for winter driving? Isabelle is much larger than my other car, Serendipity, and is literally made for cold weather. Every night during the  winter, I turn her off to go inside and she takes half of the warm engine fluid, puts it into a thermos over night so when I start the car in the morning? She recycles the warm fluids and my car is heated right away.

Why New? Well, there was an insurance issue through my accident due to the fact I had a used car. I needed to make a split second decision and I chose the more expensive, but less problematic route. The salesman was a close friend of Jesse’s at Heffner Lexus Toyota and he greeted us with a hug instead of a handshake and gave us every discount humanly possible on the car. I know very little about cars, so it is important that I can buy from someone I trust.

There are so many other features and stuff that I will forget because I am not a car person, but it is the BEST car, I love it and I had and I would love to give you a test drive sometime!