I have been promising this one for a while now and I am so excited to be able to roll it out for you. I decided that the best way to share the recent USARA national championships race was through the lens of someone who is brand new to the sport.

I asked my friend, Ed Cyr, who joined us for this race, to write the report. He told me that he wrote it in such a way that anyone, especially those who were new to the sport, would understand what adventure racing was.

Before we get into his story, meet Ed. 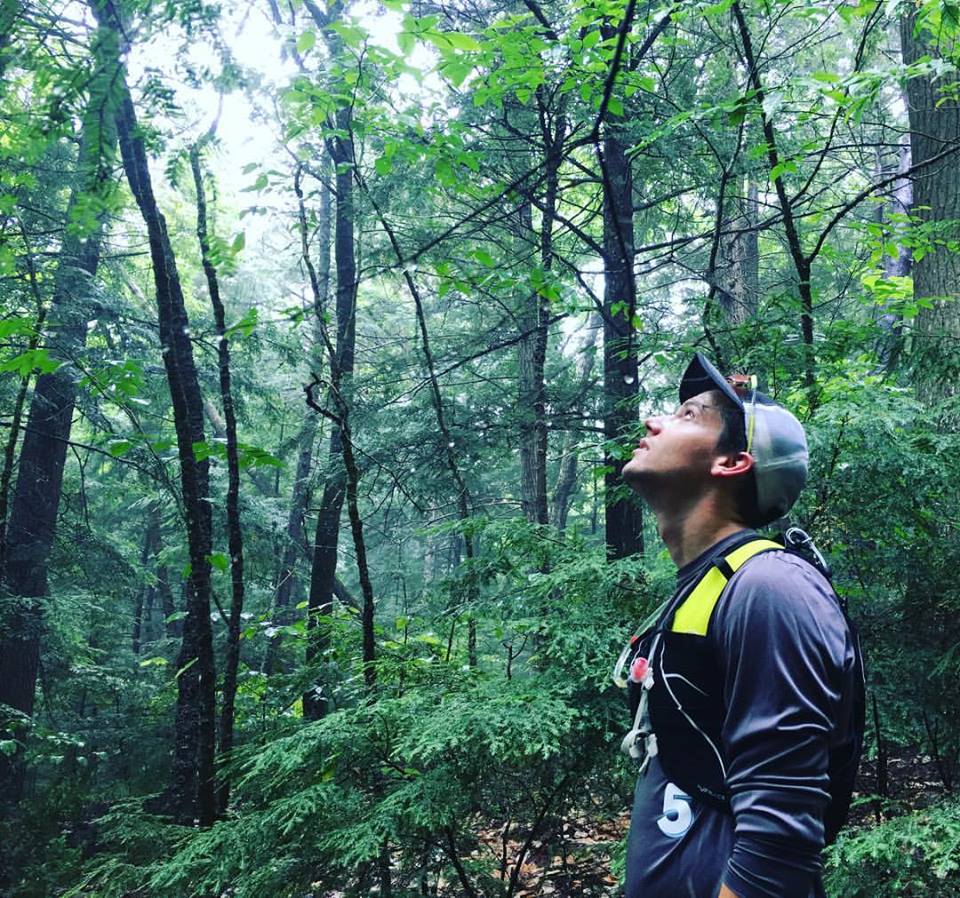 I met him at a triathlon training camp and he was instantly interested in adventure racing. This in itself is an accomplishment. He has a background in varsity swimming, curling, racing as a professional triathlete and a deep love of outdoor adventures. He raced the Lake Placid Ironman this year as well as tackling the La Cloche trail with a group of us last fall around this time.

When he is not kayaking, swimming, trail running or mountain biking, he is spending his fellowship at the University of New Brunswick studying the applications of artificial intelligence in manufacturing 3D-printed materials. He has been featured in the Globe and Mail and the Star for his efforts.

He is a dear friend and was a perfect addition to our team for this race. I am excited to share the race through the lens of someone other than myself. Ed has written this in a four-part series which I will be rolling out at the beginning of each week.

Ok. I want to put this in writing, mostly for my own sake, but I also think that this would be a good story and there may be some who would enjoy reading it. It will also help me when I get questions about how the race went and I don’t feel like telling the entire 30-hour story.

The story I’m going to share is about my first adventure race. I have a fairly long experience—for someone who is only 28 years old—of endurance racing with Ironman triathlon, distance running, paddling, and cycling. But this is different. I had no idea what I was about to face. In my naivety, I thought I could read my way to experience, picking up books like “Rusch to Glory” by Rebecca Rusch who is now one of my idols in endurance racing. Although she writes of amazing adventures, adversity and hardship, some experiences cannot be imagined.

I don’t want this story to be long and artistic, I’m not that kind of person (or writer), so I will do my best to keep it concise. I will also do my best to be accurate in recounting the events and hope that I do my teammates Jessica Kuepfer (Laces&Lattes) and Brad Jennings justice. I am so grateful to have had them on my first ever adventure race. 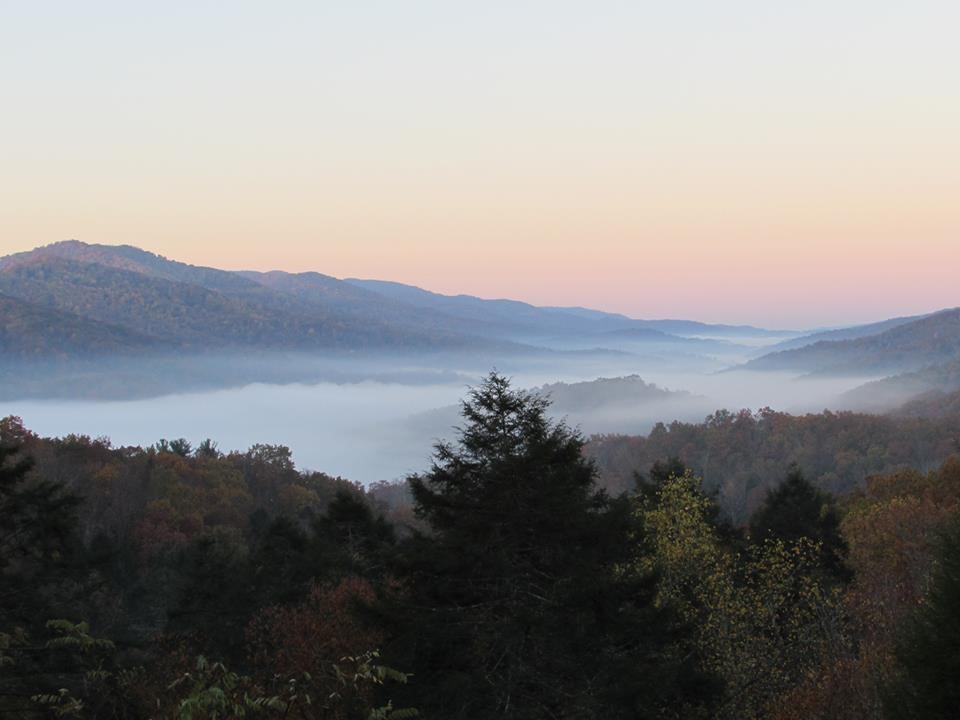 Adventure racing is not so new. There was a big increase in popularity made by the television broadcasting of “Eco Challenge” in the 90’s, where teams of athletes from all kinds of backgrounds in endurance sport would compete for days on gruelling courses around the world. They made “Amazing Race” look like a joke, and Ironman seem like a luxury. Adventure racing is different. It can span anywhere from 8 hours to a week long. This one, in particular, had a 30-hour time limit. You are also racing as a team, and that is probably the most important aspect of the race. Never has teamwork been more pivotal in my athletic career. And lastly, the course is up to you to determine. There are no marked paths, routes, or even order to how you should go through the course, and that is where experience can pay massive dividends.

Training for me consisted of racing an Ironman in July, and maintaining some long runs and paddle session through August and September up to the race start. I biked a handful of times between, but they were usually cut short by weather, or mechanical issues. Nothing to worry about though, my bike was where I had the most confidence.

The race was scheduled to start on Friday September 22 at Lake Harmony, Pennsylvania from the Split Rock Resort. Lake Harmony is a beautiful little lake south of Scranton, surrounded by state parks, game reserves, and just a few miles south is the Appalachian Trail. I registered the team and got all of our race swag by the time Jess and Brad arrived. We were in a bit of a time-crunch since we needed to drop our bikes off at TA1 (transition area 1) and be back for the athlete meeting by 7pm, and it was already 5:45 and TA1 was 40 minutes away from the resort. We quickly got into our cars and drove to transition guided by my spotty phone GPS that was struggling to find roads that didn’t have tolls. Luckily, we caught up to a Jeep with bikes on the back, so we followed it hoping it was also going to transition.

We unpacked our bikes and began prepping them as fast as we could. It didn’t help that the sun was setting and it was already getting dark.

Your bike in an adventure race is very different than Ironman or triathlon. First of all, it’s a mountain bike. Second, you have to be ready to repair almost any mechanical problem on your own, beyond just a flat tire. I packed two spare tubes, four CO2 cartridges, a multi-tool, spare chain, chain breaker, patch kit, and a whole roll of electrical tape. And thirdly, you have to be equipped with lighting for night riding. For this I had a AAA battery powered tail light, and a rechargeable front light mounted to my bars with a spare battery I carried in my pack.

We finished with our bikes and left back for the resort in a hurry. We had 10 minutes left to drive 40 minutes away or we would be late for the athlete meeting. Pedal to the floor.

At the resort, we caught most of the briefing, which was basically just reading the rules to us. We had already read these in the race package, so were relieved to know we didn’t miss anything important. We did, however, find out that there would be no transition bins, and we would not get our race maps until 5am race morning. 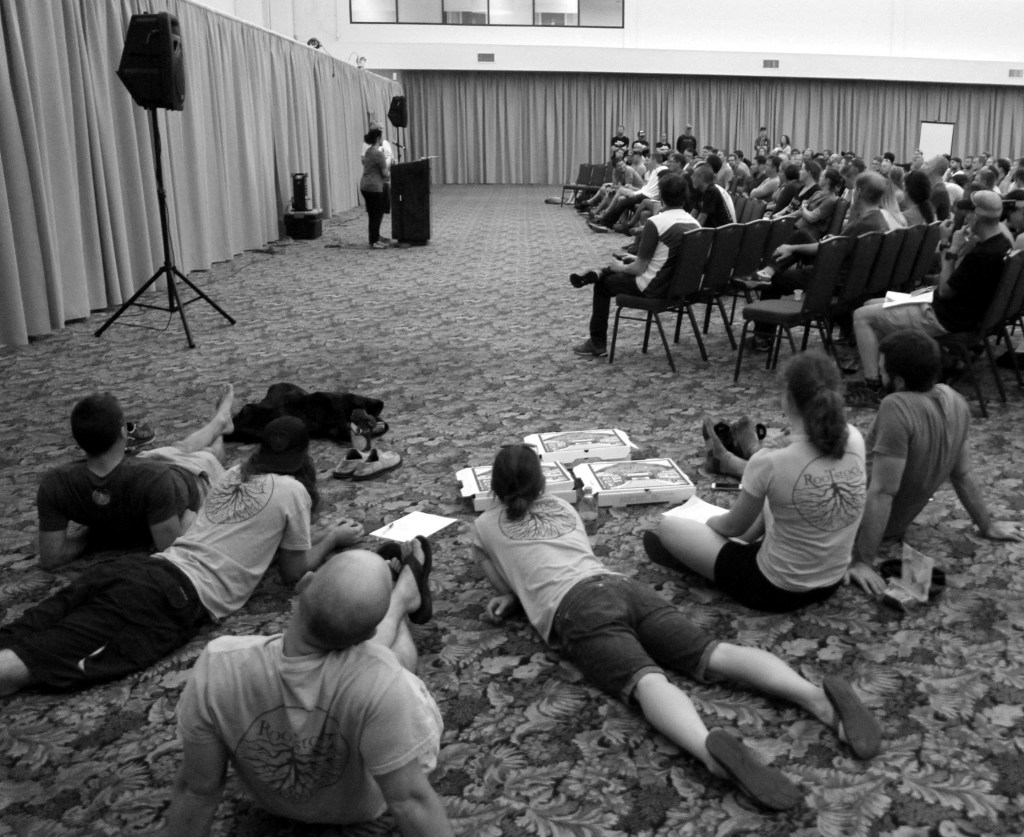 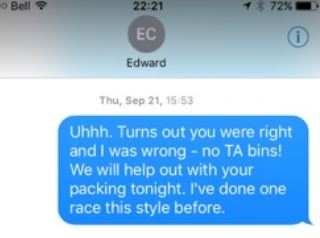 This was a bit of a curve-ball. How can you plan food and drink for 30 hours, when you don’t even know where transitions are, or where you can refill your water? We didn’t even know where the race was starting, just that we would be taken by bus at 7:30am for about an hour to the race start. There were so many unknowns and it was driving me a bit screwy because I couldn’t plan ANYTHING to give me peace of mind. We chatted as a team afterwards and decided that we would just pack all that we could, and plan for every possibility. They can’t make it that crazy of a course if we don’t get to see the maps until just before the race starts… could they?

Back at our room, we filled zip-lock bags with hordes of junk food. My personal favourites were Chips Ahoy! cookies and coffee crisp bars. In total, there were about 6000 calories in each of our bags, and several litres of water and drinks between us. We also packed an entire change of clothes, and some wipes for when nature calls. By this time, it was nearly 9:30pm and we had to be up at 4:30am. We were cutting into our precious sleep time and so went to bed as soon as we finished packing. My pizza sub from dinner was gurgling loudly in my stomach as I tried to fall asleep, but I ignored it and fell into the pillow.

That’s all for this week, friends. If you have comments or questions for Ed, leave them in the comments. Looking forward to sharing the next edition of his recap with you next Monday!

Another little general item – if you are wanting to enter my Amazing Grass Giveaway, you have until this Friday to visit the post and leave a comment. I will be announcing the winner at the end of the week.