Let’s talk trail races, shall we?

Last weekend, I did two races and both of them were different enough that I have split them into two posts.

Saturday morning, I raced the 5 Peaks Heart Lake course in the Enduro distance which was 14 KM.

It was a PERFECT day for racing. The weather was gorgeous, the energy was great in the racers and the course was HARD.

I arrived nice and early to pick up my race kit and say hello to some of my friends who were racing. Also to pick up the sweet swag at this race – this time around, there were some wicked arm warmers. 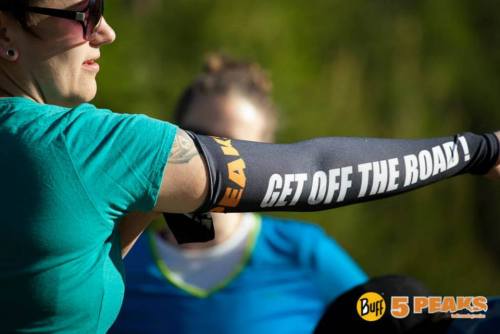 The race started at 10 am and I made a pretty grave error straight away which was starting out too quickly. I was wearing my new Suunto Ambit watch which I will be doing a review on in the future, but I am still learning how to use it, so instead of starting it, I changed my screen.

As Erin, the race director, later announced – This watch is smarter than you – and she was correct. It worked fine once I got the hang of it, but I wasn’t able to track my speed in the first couple kilometers and I was flying.

Eventually I settled into my regular pace and tackled the course which was much more difficult than I expected. Coupled with the first race of the summer run in the heat and the fact that I ate deep dish pizza for breakfast, it was a difficult race for me. (Re: the pizza, I am not saying I have it all sorted out nutrition-wise. It was early enough when I got up that it seemed like a good idea at the time. My gut thought differently around 10 KM.) 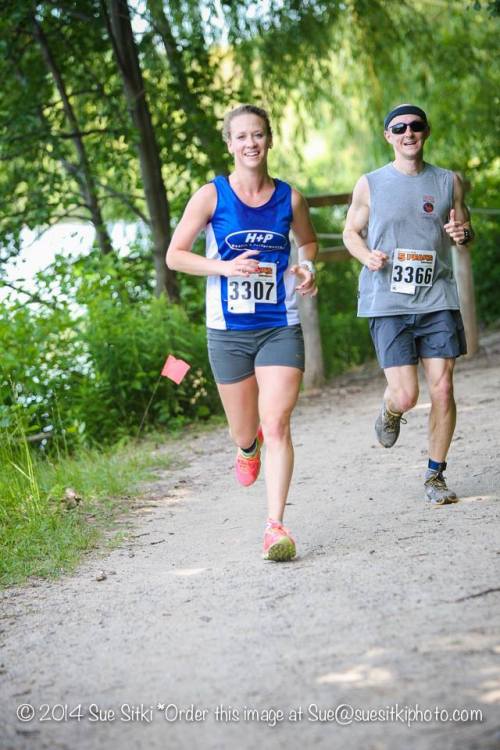 The race course itself had a nice variety of technical single track and rolling double track allowing me to be speedy in some portions and making me work hard in others. There is a MOTHER of an incline at around 6.5 KM and 13.5 KM that literally had me clawing in the dirt to get to the top. It is moments of a race like that which put the biggest smile on my face, even if I am hurting. This race also had a fantastic amount of fallen trees to leap over.

I crossed the finish line for a time of 1:12:42 which earned me fourth female OA and first in my age group. Yes, I am a fourteen year old in the results – I don’t want to talk about it.. 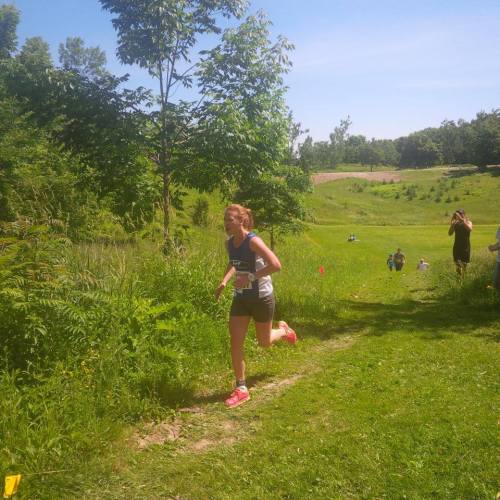 My finish was even caught on film! (Don’t judge – I was HURTING)

I didn’t feel that great due to digestive issues, but that was rectified with some of the amazing food waiting for racers at the finish line.

I was able to stay for prizes this race and I was excited to hang out with my team (who won the team category!) and some of the ambassadors and friends. 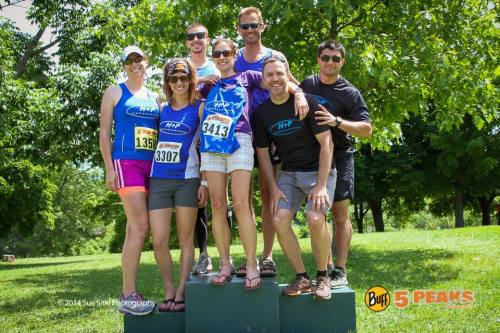 Check out other reviews by:

Another fantastic race by 5 Peaks! I will be at the next one at Rattle Snake Point on July 12 which promises to be just as technical and just as fun. Message me for a discount code and come join.