There is nothing I love more than spontaneous trips, so I am excited to be packed up and headed to Quebec this weekend to run the Impossible 2 Possible event in Gatineau with some of my fellow 5 Peaks ambassadors and friends! (Especially since everyone I know is headed to Vancouver to make me jealous!)

Travelling aside, let’s talk MARATHON. (Warning, another long post. Which is ok. This was a long race.)

This was my second marathon ever. I had NO CLUE how predict my times because I have been steadily gaining speed over the season, but you truly have no idea how that will hold up in a marathon until you run it. I had only found out I was racing for the women’s team 7 weeks out and was only in half marathon racing shape at that point. My coach and I put together an aggressive build and I followed it as closely as I could. Seriously. I threw myself into it and didn’t focus on much else.

The day before the race, I went to Stage 6 of the Endurrun to cheer on Kailey who was racing the 10 KM time trial for our team. I then went home and drank Gatorade and ate pancakes and maple syrup while propped up on pillows (because sitting would be too much energy) while watching Netflix. Carb loading heaven.

The next morning, I arrived with an hour to spare before the marathon and chatted with my four other team mates who were racing it as well. Lots of well wishes and high fives. 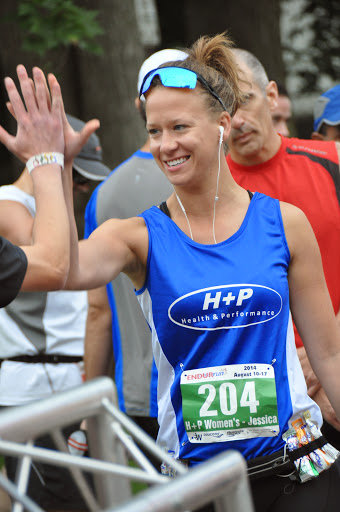 I was not nervous for this race. For the first time in a long time, I arrived at the start line knowing I couldn’t have done anything differently. At 7:30, we were off!

I settled in beside Holger, a bad ass German runner on our team who was doing the whole 160 km week and had promised to pace me. 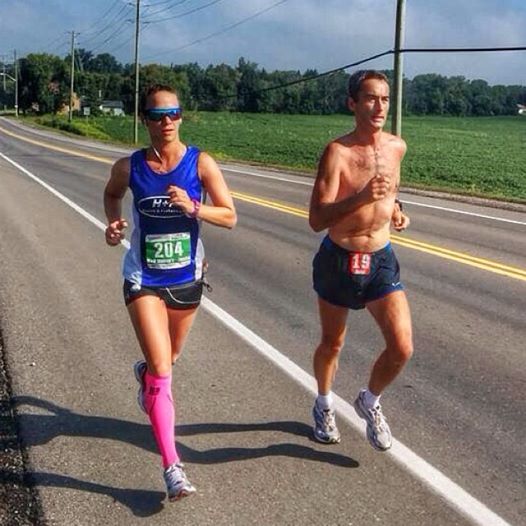 He was on 120 KM and I was on fresh legs and we were going for the same time. Go figure. We didn’t talk much, but he occasionally told me a story or instructed me to adjust my pace. He has run quite a few marathons, so it was awesome to have a veteran baby sit me in my second one to help show me the ins and outs of proper pacing. 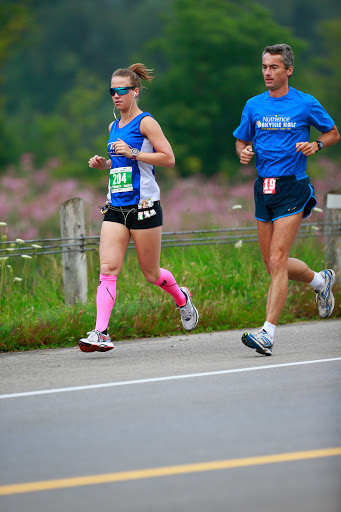 The first half was uneventful. We were holding the average pace around 4:40 – 4:45 min/km (approx. 7 min/mile for my American friends) and I began feeling my IT band at around km 22. It quickly faded when I saw my blog buddy Ange who surprised me on the side line, cheering and holding this sign: 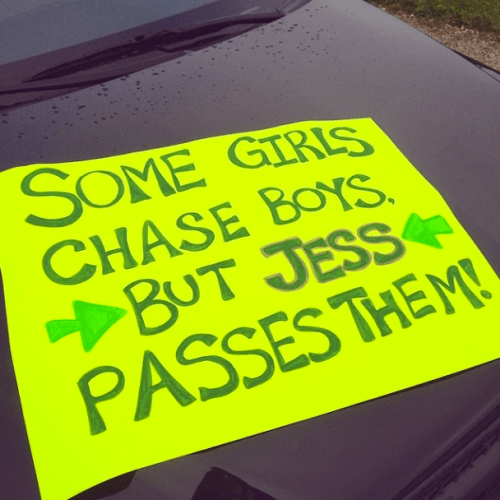 She inspired me to pick up the pace and Holger told me to slow down or I would wear myself out. He said that by half way, I should be in pain (check) and by the last quarter, I should want to stop. (check). 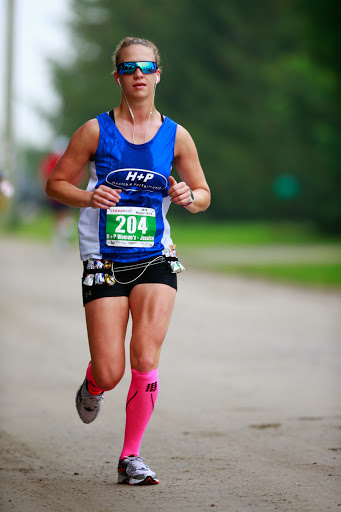 Why yes, I do dump water on myself at aid stations.

We hit a water station at 33 km and I stopped to wash down a gel. I was taking one every 30 minutes per my coach’s directions for 60 g of carbs an hour. Holger ran right through and there was no chance of catching him. I got going and my pace dropped to 5 min/km. I never hit “the wall” (thankfully, I am informed it doesn’t exist if you fuel properly), but I just became majorly fatigued because the last 7 km were hilly and windy! When I hit the last aid station at km 39, Ange was waiting with this sign. 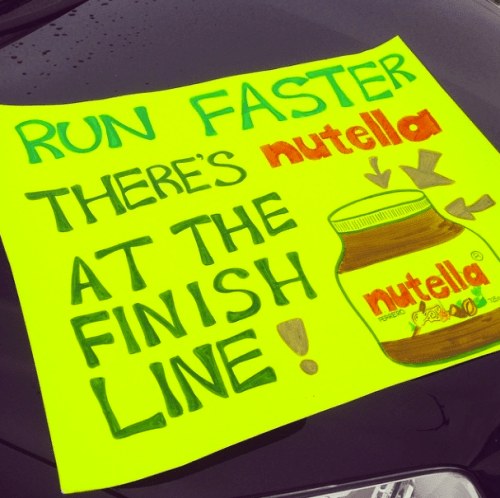 At this point, I had some gut issues (because I don’t normally slam 6 gels in 3 hours) but my coach told me to put some Gatorade in my mouth and let it sit there for the rest of the race. I had also taken to making grunting/child labour noises when people were talking to me (I THOUGHT I was saying words) and drooling Gatorade. Ange paced me for about 200 metres (the lovely hot mess that I was) and I burrowed deep into the pain cave for the last 3 km.

My IT band was stabbing and I was just tired. I was racing the marathon in such a way that if it was 43 km, I would blow up. My coach was biking alongside me and talking me through the pace. He wasn’t pushing me, but saying things like “OK, you are at 4:40. That’s ok, just try and keep that pace going up the hill”.

“STOP LOOKING AT YOUR WATCH!” 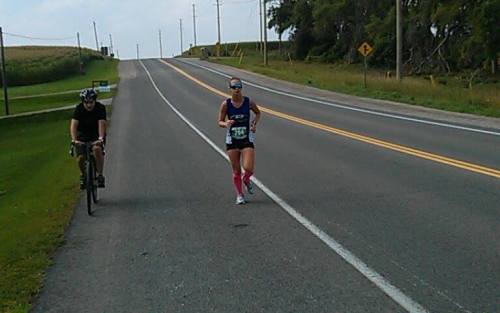 As I hit the last 500 metres, my team mate Brendan took over and cycled me into the finish line, telling me stories to keep my mind off the final run. 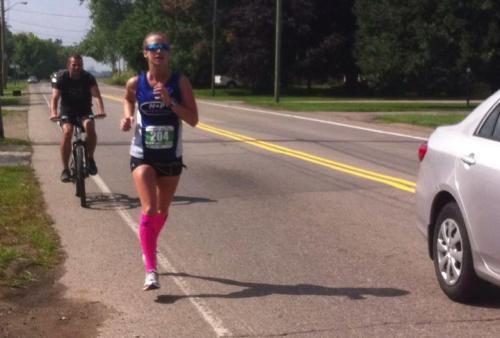 And suddenly, I was done. 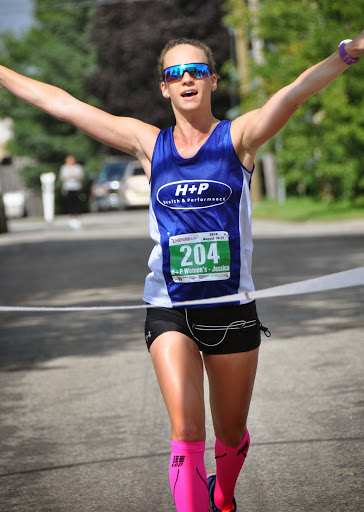 Angela kept her promise and had Nutella waiting for me at the finish line. (Which is just in time for my next marathon training build!)

I finished with a time of 3:21:36 which was 13 minutes faster than my first marathon and I am pleased with the time because this was a challenging course. It is good enough for second female to cross the finish line and to quality for Boston. Not only that, but our girls team set the course record for fastest female team which was our goal!  I love this team. 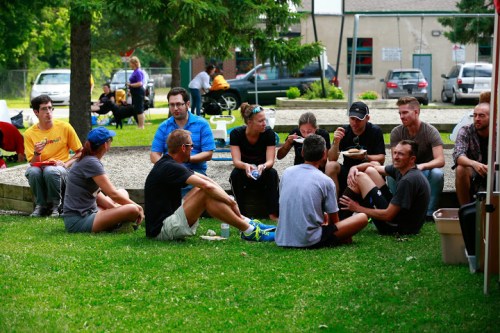 Spending some time discussing the week of racing with some members of my team after the marathon. You can read our team recap here.

I am so fortunate to have the support and love from my family as well, which means I get adorable notes like this waiting for me: 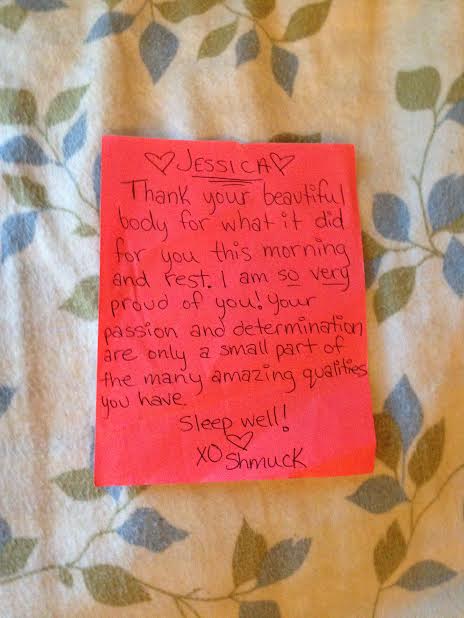 I also had amazing battle wound blood blisters. I knew it would happen because I felt my socks scrunching at 5 KM because I put them on improperly. Holger asked if I wanted to stop and fix them and I asked him if he was joking?! Instead, I wound up with these beauties: 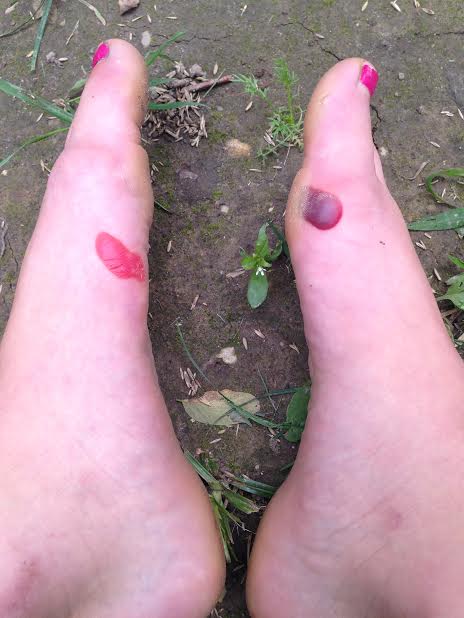 Sorry. You probably didn’t need to see that.

What I ate:
Before: Nuun Energy lemon lime (HELLLOO caffeine), banana
During: 6 GU gels.
After: The biggest plate of vegetables ever and Genuine Health chocolate peanut butter protein shake.

I have taken this past week off training completely to recover and the funny thing is, I felt better this week post-marathon than I did in my peak weeks of training. I was able to see my friends, I only showered ONCE a day, I was bouncing down stairs two at a time and I showed up to most things in a skirt instead of spandex. This is what normal people feel like!
Because I actively reject normal, I am starting my marathon build for Toronto Scotiabank Marathon on Monday morning and introducing a new feature that will share my training. I have instigated a few changes in training to do even better at my next one, including the highest mileage week I have ever run! All the marathons, all the time. Back to spandex!

Quickly before I head out, New Balance Canada is hosting an instagram contest, so head over to their account and high five their mascot to win a back pack. (Because summer is almost over and you should probably win something to deal with the depression of it all.)

What marathon are you training for?
If you win the backpack, would you pick blue or red?
Nutella is my training vice. What is yours?