Well, I have had a bit of time to recover and reboot from the race and I think my head is finally clear enough for a recap!

I had no idea what toll a 48 hour race would have on my body and I was pleasantly surprised at how quickly I bounced back. I had a feeling of generally fogginess and clumsiness this week and ate ALL THE FOOD as my body recovered. (I heard someone say that it was calculated that we burned somewhere in the neighbourhood of 20,000 calories a day so our refueling on the way home was ridiculous.)

Let’s start at the very beginning with a little bit of information break down.

WHAT is adventure racing?

A lot of people confuse it with obstacle course racing or OCR. This is a completely different sport and can also be called expedition racing. It’s combination of two or more endurance disciplines, including orienteering and navigation, cross-country running or trekking, mountain biking, paddling and climbing and related rope skills. It can range from the sprint distance (I have done two of these: 3 HR RAID THE HAMMER and 8 HR EPIC in Michigan) to a 7 day.

WHO did I do it with:

I met Brad last year through a common sponsor and we speak the same brand of crazy and I found myself on their adventure racing team called Team Ripkin. We have many more races planned, but the biggest one this year is Wilderness Traverse in Muskoka in October.

Brad threw this race out there and said it would be a good practice race for Wilderness. I agreed and we made plans to compete. The race director mentioned to us that if we added an extra body, we would be featured on the NBC production of the race so Steve was added to the crew and we began furiously sending emails back and forth.

The Friday before the race, Brad and I met up in a local city and drove down together to the race. It was a lot of fun to hear about all of his adventures (check them out here) and we made a necessary stop to pick up ALL the groceries for the race once we crossed the border.
Once we got to the hotel, we met up with Steve, who is one of the most bad ass people I know. He casually does ultras and doesn’t just do an IRONMAN, but does an IRONMAN and a half…

After a huge Mexican dinner, we prepped our mountain bikes and I proved my newbie status by bringing along a hardshell suitcase full of everything including a triathlon wetsuit. I gave them a fashion show of what I was thinking of taking and they helped me parcel out what I should take in my pack, what I should put in the transition areas and what I should leave behind.

I left MOST things behind. This race was self-supported which meant we carried it on our backs. I carried a change of clothes including warmer clothes for night in a dry bag, ALL THE FOOD, a knife, a water bladder, a compass, an emergency blanket, lip chap, Kleenex, and face wipes. I also took the time to make the most disgusting looking wraps with all natural peanut butter and bacon which ended up being exactly what I needed on course. 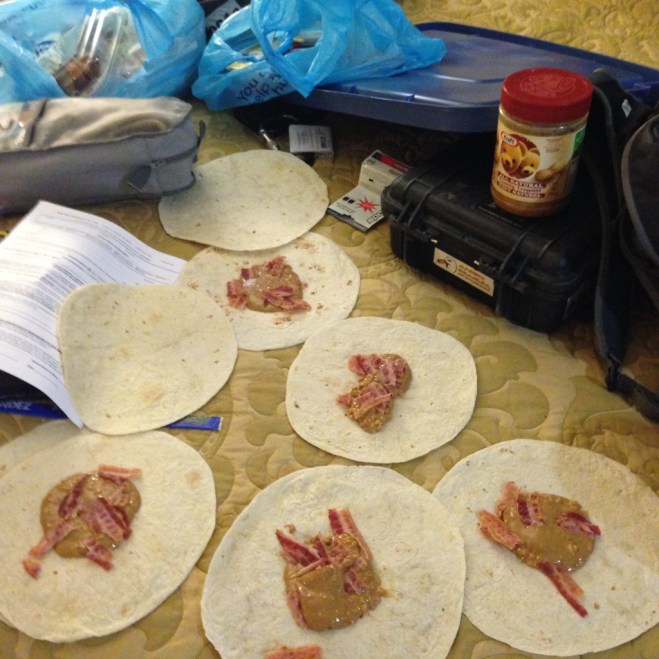 It tasted better than it looks…

Saturday morning, we headed to the race start where we began prepping the maps and getting ready for the 9 AM start time. NBC was doing some initial interviews and catching athletes while they were excited and fresh.

We began the race with a bike leg so we hopped on our mountain bikes and the hills hit like a ton of bricks. I have never been so humbled in my life. It was just up. It took me a long time to warm up and I really slowed the guys on my team down on this portion. It was very clear to me that I need to practice hills more. I thought I was great at them and I even won the Creemore Vertical Challenge race last year, but those are hills and these are mountains. It was a good illuminating moment for Transrockies this summer.

After about 3 hours, we hit the transition area for the trek and we headed out for about 25 KM of hill climbs and were thrilled to clear the course and get all the check points for this area. This was STUNNING and I kept looking at the view and saying “I am SO lucky”. We needed to push HARD on the way back and with a heavy pack on our backs, it almost burnt us out. We took about an hour in the transition area to plot our next stretch of maps because we were headed into nightfall and wanted to have a clear direction of where we were going. I ate food hard and refilled my water pack. 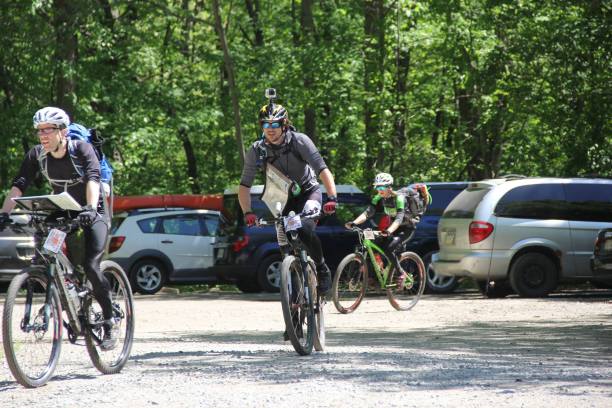 I will be honest. There is probably nothing more disgusting than watching an adventure racer eat. Everything is about keeping transitions fast and because of the sheer amount of time you are out in the course, you get sick of gels really fast and need a good mixture of sweet and salty. You also look for the most calorie-dense food options possible such as peanut butter bacon wraps, trail mix, jerky and protein bars. For the first day, I ate something every hour to keep going and I had Nuun in my hydration pack. I also started adding Nuun Plus as the race wore on because it is a new product that adds carbohydrates to Nuun. I went through 2 tubes of Nuun out there.

We then hopped on our bikes and started the long night. Our next cut off point was 4 am which meant we needed to clear the next course by then. It was a beautiful night and I kept looking at the stars as we rode up the mountain repeating what became my mantra this race “I am so lucky.”

I needed to take a caffeine pill at this point which brought me back to life and by the time we stumbled into the cut off area, I was ready for another huge meal. The stop was located at a convenience store and I gave an elated interview announcing I felt AMAZING (I later realized my head lamp was on and I had dirt on my face from a fall I had taken on the bike…classy). We descended upon the convenience store and I bought a Starbucks double shot and a breakfast sandwich. You know when you go into a gas station and you see that food that is sitting warmed and full of crap and you wonder who in their right mind would eat that? Answer: I would. After almost 24 hours of racing at 4 am.
I saw my friend Kim and we swapped race stories and we all headed out.

Well. We tried. My bike flatted and Steve was incredible and changed it for me.

As the sun rose to mark the second day of racing, we hit the hardest hill stretch of the course and I failed. HARD. I completely hit the wall and I was absolutely crawling up the hill, just walking my bike with my head down. It was the lowest part of the race and I felt like a heel for letting my team down. They were so lovely and kept a great attitude, pulling me out of my funk. That is one of the biggest things I learned from a 2 day race is that you WILL have lows but they go away, you just need to power through. You will feel like quitting a hundred times, but you just need to have the resolution that you WILL NOT, especially because you can fall asleep biking. Trust me, I have done it.

I eased out of my funk but the damage was done. Factor in the fact we got lost on the way to our next cut off and we were too late for the O course. This meant hopping back on our bikes and heading to the paddling section. We scrambled to get to it as we only had 3 hours but when you factored in the fact we were slowly fading from lack of sleep and rest and an old man who stopped to yell at us for trespassing, we were cutting it close. We pushed as hard as we could to the drop off and made it for 6:01. The boats left at 6:00 PM.

It was a deflating moment to realize we were back on the bikes for yet another course into the second night, but I knew we were 4 checkpoints from being done at this point.

You know when you are on the home stretch? Imagine that home stretch was 6 hours long. I went into “I’m almost done mode” and stopped eating which was completely selfish of me because it made matters worse. We started this section with a killer climb and as night set in, I became more and more loopy. By the time we were finding the final check point, I was barely blinking or processing what was going on. I felt like I was drunk and started hallucinating poodles and camera crews and truly believed that the guys found the last check point a good hour before we did.

We finished around 1 PM and I gave a nonsensical interview before crawling into the car and sleeping for 3 hours. Hands down, the best sleep of my life. 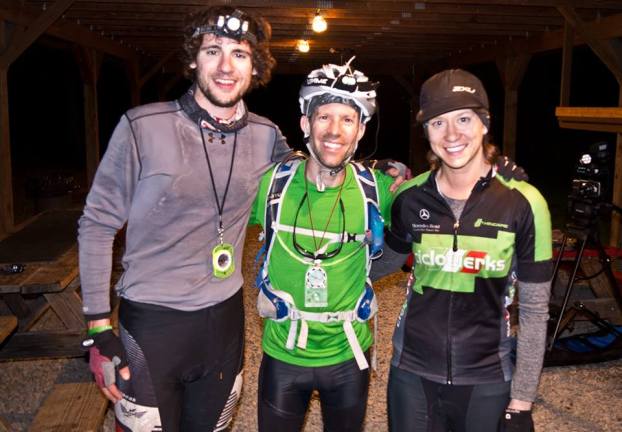 A battered and happy Team Ripkin at the finish line after 2 days of racing, 260 KM covered and 25,000 + of elevation.

In the morning, we went to awards as a team and said goodbye to Steve. Brad and I then proceeded to go white water rafting for 6 hours because that is what insane people do. We ate ice cream in the sun afterwards, half-crazy with heat, exhaustion and post-race adrenaline, just absorbing the awesome of the experiences we just had.

Again, I just had to use my race mantra “I am so lucky.”

After loading up on coffee and snacks, we hit the road for a long ride home, punctuated with stops to restaurants along the way to eat. I had my first quarter pounder from McDonalds in a decade and it felt like I didn’t eat a thing. That is the one thing I don’t think I will ever get used to with adventure racing – the sheer amount that you need to eat to bring your body back to normal.

Some of the biggest things I learned from this race?

– The team you race with is vital. I was fortunate to race with two of the most sportsmanlike and gentlemanly team mates I could have asked for. They were patient with my weaknesses and willing to show me the ropes.

– It is vital that you take care of yourself for the betterment of the team. This means not making reckless decisions, eating and drinking enough and being honest about your mental and physical state. Every once in a while, the captain would ask “How does everyone feel out of 5?” Answer honestly.

– Don’t complain. Just because something hurts or sucks, you don’t need to say it. I thought I was strong in this area until I did this race. Next race, I will be even better. I made comments about my bike seat, about fatigue and about frustrations. This only brings the team down.

– Hills. All the hills. I will train them like it is my job.

That being said, I cannot WAIT for the next one!